Legendary Yes guitarist Steve Howe has announced he is to release Love Is on 31st July through BMG Records. Love Is is Howe’s first solo album since the all-instrumental Time in 2011 and has a balance of five instrumental tracks and five songs.

The album will be available as CD – gatefold digi-sleeve with 12 page booklet and LP – Black vinyl 180gm with gatefold sleeve, liner notes and lyrics.

Many years in the making, Love Is brings together a consistently strong and polished listening experience, forging the very best from the writing and playing throughout the album. This may well be considered the real ‘stand out’ album of Howe’s solo career. The instrumentals keep a highly progressive rock guitar style to the fore, with songs that explore stories of lives lived and lives only just begun. Love Is A River is the central longer song with several textural shifts, featuring a theme played on 12 string and steel guitars.

“I called the album Love Is because it hints at the central idea that that love is important but also love of the universe and the ecology of the world is very important,” says Steve Howe. “Alexander Humboldt went around the world and recognised we are destroying the planet but that was 200 years ago! We are still destroying the planet and, I suppose, my songs show the yearning I have for the love of nature and how beauty, art and music all stem from nature. There is a theme about those things, love, beauty, ecology, nature and wonderful people.

“Love Is A River just seemed a very important track to me, a sort of quintessential track with lots of moods, lots of interesting things going on with steel guitars and acoustic guitars. Further tracks grew from time spent writing in my studio.

“See Me Through looks at the idea that we get through life by not driving ourselves that hard but attempting to achieve things with people who help you along the way and Imagination is dedicated to my granddaughter Zuni. It’s about how I see some of the things she’s experienced in her short seven years.”

“I invited Jon Davison to sing harmonies with me and add bass on the songs. If he was singing on the songs I thought why doesn’t he play bass as well and it turned out nice. He’s been with Yes for seven or eight years and he’s a great guy, great performer and a great interpreter of Yes songs.“I’ve been singing for years, mainly in harmony but I’ve sung lead on lots of my own albums before and I feel that, as I’ve got older, I’ve got a grip on that and, hopefully, it’s improved over the years.”

The album includes many distinctive Steve Howe signatures among the instrumental tracks from the delicate beauty of Fulcrum, Beyond The Call and Pause For Thought to upbeat rock, The Headlands, and the jazz-tinged Sound Picture.

“The instrumentals are like a mood, a place I went to one day, thought this is nice and then I develop that to a point where it’s a finished track. There might be key ingredients that I thought about using musically that I like, that I’m drawn to, and then developing them into something.”

Love Is was written, engineered and produced by Steve Howe with further engineering and mixing by Curtis Schwartz. “I write in my own studio and then go to see Curtis in his studio,” Howe explains. “We expand the tracks and put them on Pro Tools and everything starts to be possible. At some point, probably around 2 years ago, Dylan came down to Curtis’s studio and we recorded the drums on some of the tracks. I could see a balance of five instrumental tracks and five songs and there was a feeling that it was an album, sitting there, looking at me.”

The track listing for Steve Howe’s Love Is album is:

3 Beyond The Call (instrumental)

4 Love Is A River 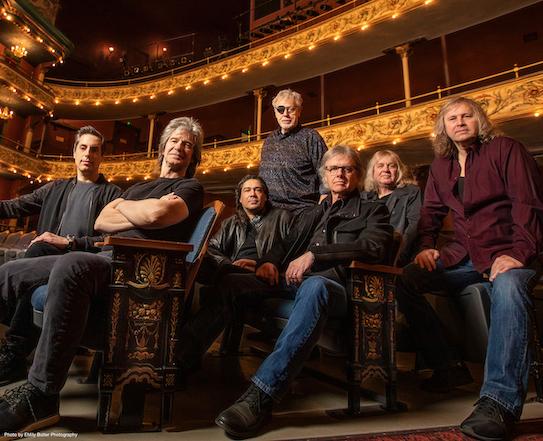 30th March 2020: Kansas, America’s legendary progressive rock band, will release their highly anticipated new studio album “The Absence of Presence” on June 26, 2020. The band gave fans a sneak preview of what they can expect to hear on the album with this sampler video:

“The Absence of Presence” will be released June 26, 2020, on Inside Out Music. The album will be available on CD, Double LP 180 Gram Vinyl, Limited Edition Deluxe CD + 5.1 Blu-Ray Artbook, and as a digital album. Pre-order opportunities begin on the 17th April via KansasBand.com & other outlets.

5. Memories Down the Line

7. Animals on the Roof

9. The Song the River Sang

The album follows-up 2016’s “The Prelude Implicit,” which debuted at #14 on Billboard’s Top 200 Albums chart. KANSAS has sold more than 30 million albums worldwide, and is famous for classic hits such as ‘Carry On Wayward Son’ and ‘Dust in the Wind’ to progressive epics like ‘Song for America.’

“It’s been a while since the band has been able to perform in Europe, where we have some very passionate fans,” adds KANSAS guitarist Richard Williams. “We are excited to take the Point of Know Return Anniversary Tour across Europe. Not only will they hear us perform that album in its entirety, along with other hits and deep cuts, but they will be the first fans to hear some of the songs from ‘The Absence of Presence’ performed live.”

After wrapping-up current U.S. dates for the Point of Know Return Anniversary Tour this spring, KANSAS will debut a track from “The Absence of Presence” live, this summer, during the Juke Box Heroes 2020 Tour when the band will be touring with Foreigner and Europe.

Tickets for the KANSAS Point of Know Return Anniversary European Tour will go on sale this week. Ticket and VIP Package information is available at KansasBand.com. Tickets for the U.S. Point of Know Return Anniversary Tour, Juke Box Heroes 2020 Tour, and KANSAS Classics dates are on sale now with ticket and VIP package information are also available at KansasBand.com. Martin Barre, best-known as guitarist in Jethro Tull – one of the biggest selling prog bands of all time, releases his new solo album Roads Less Travelled on Garage Records on 31st August 2018.

Barre has developed his own distinctive style within the framework of Jethro Tull, and his instantly recognizable and original sound form the basis of this album. Roads Less Travelled features 11 original tracks by Barre, which reflect the last 50 years of his esteemed musical career.

Reflecting on the tracks & recording of the album, Barre says “I’ve concentrated on improving my songwriting over the last few years and as a result, I am really pleased with this new CD. Although my playing has a lot of space in the music, I’ve worked a lot harder on the arrangements and lyrics. My goal is to have a CD that keeps the listener from beginning to end. ‘Roads Less Travelled’ reflects my belief in taking music somewhere new.”

Barre’s solo on Jethro Tull’s 1971 hit Aqualung has been repeatedly voted as one of the top guitar solos of all time. Barre has been cited as an important influence by many virtuoso players, including Joe Bonamassa, Steve Vai & Jo Satriani and can count the likes of Mark Knopfler and Geddy Lee amongst his many fans. Barre was the guitarist for rock band Jethro Tull from 1969 – 2012. Jethro Tull have sold an estimated 60 million albums worldwide, with 11 gold and 5 platinum albums among them and were described by Rolling Stone as “one of the most commercially successful progressive rock bands”. Barre appeared on all but their debut album during his 33 year stint with Tull and is the longest-serving member after Ian Anderson. For four decades, Barre’s career focused on Jethro Tull but in the 1990s Barre began to perform as a solo artist and has since released 7 solo studio albums. On these recordings, Barre combined rock and guitar-oriented fusion in his sound.

Martin’s guitar playing has earned him a high level of respect and recognition; he was voted 25th best solo ever in the USA and 20th best solo ever in the UK for his playing on ‘Aqualung’. His playing on the album ‘Crest of a Knave’ earned him a Grammy award in 1988. In addition to his Jethro Tull and solo work, Martin has worked live with many other artists including: Paul McCartney, Phil Collins, Gary Moore, Jo Bonamassa and Chris Thompson and has shared a stage with such legends as Hendrix, Fleetwood Mac, Pink Floyd and Led Zeppelin.