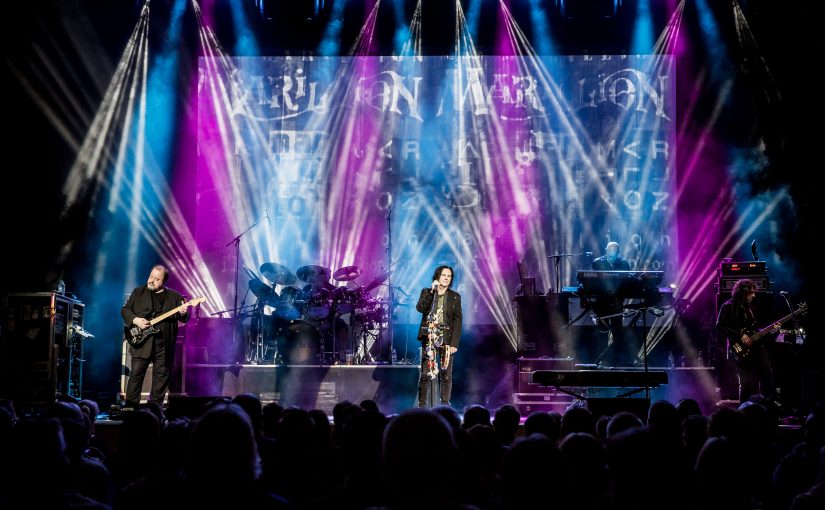 Marillion have seen The Light At The End Of The Tunnel! With the long, dark days of Covid-19, hopefully, behind us by then, Marillion will shed some light across the stages of Britain with a 10-date tour in November 2021 culminating in 2 nights at the London Eventim Apollo, Hammersmith. Tickets go on sale from Friday 23rd October 2020.

Steve Hogarth says: “We’re currently writing album number 19 and, as you might imagine, looking forward with every sinew to getting back on the road and playing it to you. Not as much as my wife’s looking forward to getting me out of the house though…

**Please note the Apollo Hammersmith shows will be – one night seated and one night standing.

Tickets go onsale at Friday 23rd October at 10.00am from: www.myticket.co.uk/artists/marillion

We are extremely fortunate, we had set aside this year to make our 19th studio album and so we saved up a bit and we budgeted for a year on the ground, before this plague broke,” said lead vocalist Steve Hogarth.

2020 has been a terrible year for everyone and Marillion are grateful for the continued support of their family of faithful fans, particularly the wonderful donations from the Couch Convention weekend in September which raised £31,530 for their crew who have been hard hit financially by the pandemic.

Of the success of the weekend, Mark Kelly said: “What a weekend it was! We were totally stunned and knocked out by everyone’s involvement in everything that went on, from Steve Rothery’s late night cocktails to Pete’s Bass Masterclass. Ian’s Drum Q&A and my early morning fun run and all the music, chat and fancy dress in between.

“It was fun for us to be in the audience, too, reading and reacting to all your comments as the shows were streamed. The crew tip-jar was overflowing with your generosity, you raised a substantial sum for our wonderful crew. The money will go a long way to helping them survive a difficult year. Thank you!”