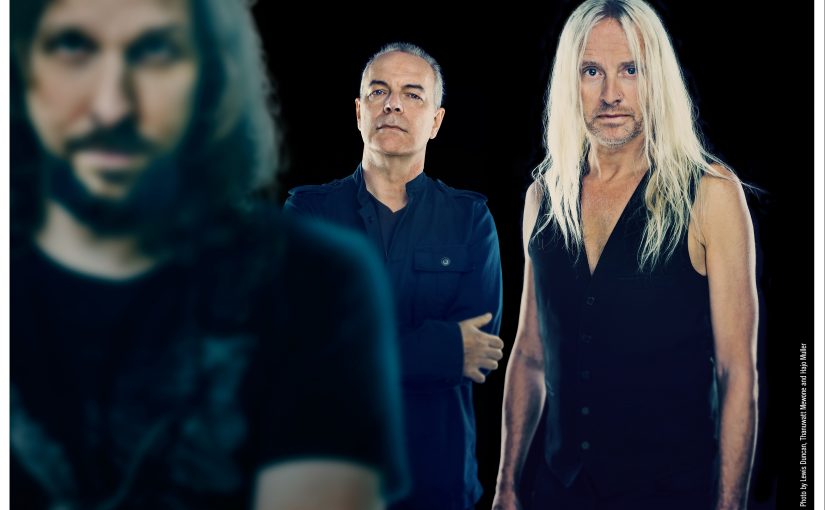 The Mute Gods: ‘Tardigrades will inherit the Earth’

I had to do some googling to find out what a Tardigrade was, upon first reveal of the albums title I thought Tardigrades were what I achieved in my A levels all those dim and distant years ago, and it was ‘great my time has come’.

Upon reverting to the nearly always accurate Wikipedia it turns out a Tardigrade is not a D in media Studies but an odd looking water dwelling eight legged micro animal, sometimes known as water bears or moss piglets, it appears that these animals can survive in extreme conditions that would kill everything else, hence the title, which suggests that long after we’ve gone and done our damage to the worlds ecosystem, these little guys (no more than 0.5mm in length) will still be here.

Dark stuff indeed from the Mute Gods on their second album.

Following on from 2014’s ‘Do Nothing til you hear From Me’, Nick Beggs, Roger King and Marco Minneman have gone into even darker territory than on their debut.

Here Beggs and co are full of anger and despair at the current global situation, and this is reflected in some heavy musical passages, angry and impassioned vocals from Beggs and a musical sound that veers from outright darkness to shades of lighter music, where the mix of almost progressive metal turns on it’s head to a more melodic sound. Having worked together as part of the Steve Hackett band, Beggs and King found a musical rapport that comes to fruition in the Mute Gods, and adding Minneman, who Beggs worked with in the Steven Wilson band, you find a musical collective who are so in tune with each other that it drives the music on.

Instead of utilising guest musicians, this record is firmly focused on the diverse and multi faceted approach that the three members bring to the table, a contemporary progressive power trio if you will. However there is none of the pomp and circumstance that you’d get from an ELP, or the look at me battle for supremacy that destroyed Cream.

Instead this is all about the music, and more importantly all about the songs on here. Tackling both his trademark Chapman stick and guitars on this album, as well as the vocals, Beggs is firmly at the forefront on this record, stepping away from the sideman role he does so well into the role of frontman, which he carries off with style and real musical presence throughout this record, the sublime sound of his guitar and bass on tracks like The Dumbing of the Stupid is one of the defining sounds of this record. Roger Kings keyboard, guitar work and production make this a sonically adventurous release, with some real beautiful musical peaks, this is not a record for the faint hearted by any stretch, if however you want your horizons broadening and your music and lyrics full of inconvenient truths, then this is for you.

Drumming powerhouse Marco Minneman is the driving force on this record, his mighty drum sound thundering through like the hammer of Thor, as tracks like the first single We Can’t Carry On demonstrate.

The heaviness is reined in on tracks like the Early Warning, which has a melodic feel to it, not dissimilar to Lifesigns debut (which Beggs was an integral part of).

The title track has an 80’s vibe to it, with a fantastic guitar line some classic synth sounds and great vocals by Beggs, this is probably the closest to a single on the album, and one which mixes Beggs pop and prog sensibilities to create a superb song. Highlight for me on the album has to be the wonderful The Singing Fish Batticaloa with its superb vocals, and the way it grows into a moving anthemic modern prog song, is sheer ecstasy for the ears. This album pulls no punch when it comes to painting a picture of the state of the world currently, and there are some people out there (mainly on Facebook & twitter) who think that artists shouldn’t comment on what’s happening in the world, I say why not? Some of the greatest art and music has come from a time of trouble and darkness in the world, and there’s no point our musical heroes going all ostrich on us and ignoring the current global climate of hatred and fear.

This makes this album an uneasy listen, but when it’s wrapped up in such intense and well crafted music and a superb production that allows the songs to shine, this is something you have to hear, whether you like the message or not.