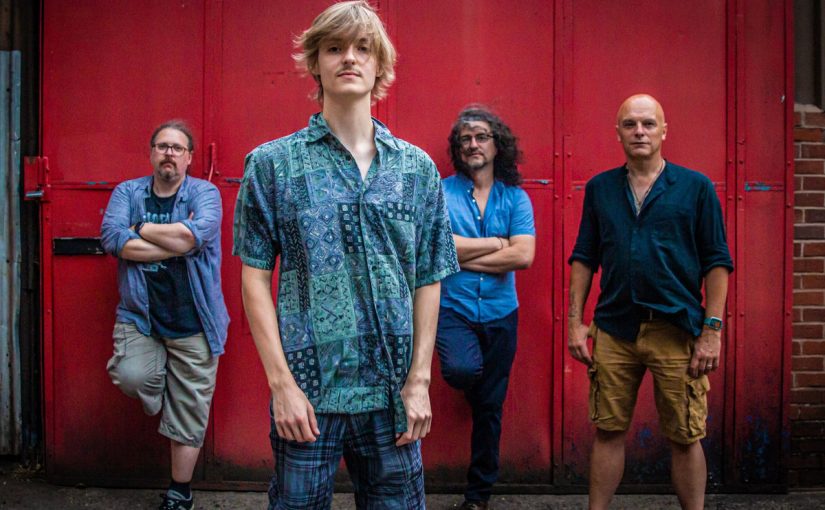 Rain are a new project that came to light during the first initial period of lockdown in the UK. So some time after 23rd March when the powers that be realised that this virus and pandemic were a lot more serious than had previously been acknowledged. So much so that ‘Herr Boris’ got serious and told us all to stay at home, not go to the pub, segregate and do not mix.

Now this in itself was unusual and very much outside of Boris’ perceived jocular foppish and playful demeanour where he likes to portray himself as a man of the people. It was that in this time that John Jowitt and Andy Edwards (both formerly of IQ and Frost*) decided to form a new group that would allow them to do what they do best, i.e., make some fine new music. To this end they drafted in Rob Groucutt (son of former ELO bass player Kelly Groucutt) who has followed in his fathers footsteps with a career in music and also adding Mirron Webb of Birmingham based band Hey Jester on guitar, vocals and lyrics and, as such, the stage was set.

Rain first appeared on the Fusion festival lockdown special in April debuting the song Devils Will Reign, which was certainly a strong and enlightening first peek into this new band,

The album ‘Singularity’ was released in November 2020 and it is a rather interesting listen, one that will stay with you for a long time. It is one of those albums that initially intrigues you, albeit in a good way, with that feeling continuing with repeated plays. As you do so, it begins to emerge what they are on about, for this is very much an album borne of the frustrations and limitations that lockdown periods have inflicted upon us all. Here Rain have channelled those feelings and thoughts into 5 gloriously crafted and formulated songs.

The album opens with Devils Will Reign which has two sets of lyrics, one from Rob Groucutt, the other from Mirron Webb, that Andy Edwards put together, finding that it worked particularly well. It is a song about one’s own personal demons which seem to come to the fore in times of doubt or when there is nothing else going on, times like a lockdown for example. This song really hits the mark right from the off, opening with gently plucked acoustic guitar and some subtle keyboard backing before the drums pick up the beat and then some strong percussive guitar riffing emerging. The song also features a very nifty Spanish type guitar solo that is exceptionally fine indeed.

Second song Dandelion is about the lies we get sold by those in power, especially as seen during this pandemic with test numbers etc. There are some remarkably interesting sounds on this song also referring to possibly the whole sorry saga of the lies surrounding Brexit and the dodgy Bus of Lies, all £350 million a week’s worth that simply disappeared somehow.

Walkaway is the first lengthy track and is about wanting to escape even if only temporarily. Again, there is some sublime playing on this track with a muscular section after the second chorus which really sounds good around the 3 min 45 mark. This includes with a nifty solo, Mirron, Rob and Andy all adding fantastic guitars to this mix. This is an exceptionally fine track indeed with superb vocals that really add to the tone of the song.

The Magician is the album’s second longest track at 11 minutes and 16 seconds, all of which is wisely used to craft a sinuous and twisting behemoth of a track with oblique lyrics which really suit the subject matter. This track speaks of a magician who hides the meaning behind the reveals so that the truth is meant to be unfathomable. The listener never really hears the hidden knowledge, implying that it is a drug trip or an interventional dimensional breakthrough. Which, of course, in itself hides what it is trying to say. Again, another fabulously diverse and rewarding track.

The final track, Singularity, is the title track to the album and, after the convoluted The Magician, this could be a gentle comedown or a return to the real world. It certainly is a far gentler track, free from the bombast that has been evident on the album this far. It has touches of Devils Will Reign, which adds emphasis to the song. Containing lots of ambient noises, including birdsong, it is a stunning finale to what has been a sensational and awesome set of songs. The musicianship throughout has been impressive and Rain certainly prove to be a significant new band with much promise for the future, once the virus is kicked into touch.

The album is well produced and sounds very impressive and, even as a late comer in the year, it still is impressive enough for me to rate it as one of my top twelve for 2020. This release is one that any fan of progressive rock (or who likes either Frost* or IQ) would enjoy and find much in it to admire and appreciate.