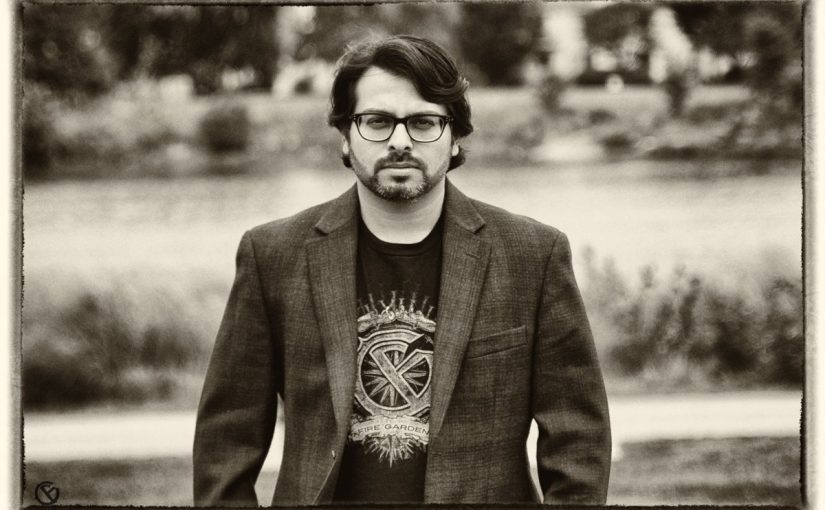 “I’ll keep evolving and put that into my songs.”
Alanis Morissette

One of the great pleasures of being a music journalist/reviewer is watching an artist mature from their initial early steps and through their growing career. You see how the raw musical talent becomes focused and more mature to give ever impressive musical releases.

One such artist, for me, is Chicago native Zee Baig and his musical project Fire Garden. From hearing 2012’s debut E.P. ‘The Prelude’ (where I initially became friends with this engaging musician) through 2014’s first full length release ‘Sound Of Majestic Colours’ to this latest album ‘Far and Near’, you can see the increasing skill and artistry, not only in the music but in the songwriting too.

Zee is the mastermind, songwriter, guitarist, lyricist and a founding member of Fire Garden. He is self-taught musician. His main influences are the music of late 60s and early 70s and bands like Dream Theater, Pink Floyd, King Crimson, Opeth, Porcupine Tree, Steven Wilson and classic bands like The Beatles, Led Zeppelin and many more.

Zee has called on the undoubted drumming skills of Jimmy Keegan (Spock’s Beard) on the new release, which also features Jordan Rudess’ keyboard wizardry and is mixed by Bruce Soord. The spectacular artwork is from the feverish mind of the legendary Travis Smith.

Frank Lucas (piano, keyboards, synths), Marc Malitz (bass) and Barry Kleiber (bass) make up the rest of Fire Garden and each adds their own considerable expertise to the melting pot. The album opens with title track Far and Near which is a haunting two minute instrumental that drips with pathos, feeling and intense emotion. Dominated by a sentimental piano note, it really strikes a chord with me, leaving me feeling slightly melancholy, but in a good way. There’s Something begins with a delightful strummed guitar before the drums become the driving force. Zee’s vocals lull you into a state of grace with their lush tone before the riff gets a little heavier and the song takes on a more serious feel. The chorus has a great hook and you just seem to be carried along on the wave of sentiment that the track engenders. There’s a slight interlude in the middle of the song, an ominous feeling that we are working up to something as everything slows down to a meditative pace. It’s a laconic and laid back, if intricate, build up to a slow burning guitar solo that hits you in the solar plexus and holds you in place while stripping your soul bare. A nicely judged and intelligent song that shows just how far Zee has come as a songwriter. A thunderously powerful riff is the opening to A New Day, a song that has the feeling of U2 but as if it was played by Metallica, the imperative verse drives on with the urgent vocals and dynamic drums. There’s a mesmerising feel to the heavy riffing and eerie organ note that adds to the wall of sound that is being generated. The slow build to the solo really sets you on edge and then Zee’s coruscating guitar really burns bright. A really compelling and forceful track that holds your attention to the explosive end. Now to my favourite song on an album of great tracks, Life of a Drifter is a whimsical and nostalgic song that brings out feelings of hope and regret deep from your soul. The laid back chorus is gentle and touching breaking into a softly sung but heartfelt chorus. There is a sense of not wanting to look back at a sepia tinged past so that some sort of pain or less can remain hidden. Don’t look back, just focus on tomorrow, it really touched a nerve with me and I am moved every time I listen to it. The serenity is broken by clashing drums, guitar and keyboard, a maelstrom that leaves you breathless with its ferocity before a more focused and powerful rendition of the chorus is sung. This is all leading up to an absolute monster of a keyboard outro by the legendary Jordan Rudess, given free rein to let loose his mind-bending virtuosity. Turst me, you’ll be left slack jawed by the brilliance! The slow brooding A Thousand Lost Souls is a superb instrumental that seems to just be boiling under the surface, leaving the tension readily apparent. I love the way it makes the hairs on your arms stand up with its intensity and focus. Once you’ve heard the first note, you daren’t turn it off, it is like it is talking to you in a mystical musical code. War and Peace is a darkly powerful prog-metal track that feels like it has clawed its way up from the bowels of the earth, elemental and alive. The repeated, singular, words, are delivered in a menacing chant before the industrial riff and deliciously evil guitar threaten to take over your mind, leaving you a slave to the rhythm. Faint Shadows follows that seriously heavy prog-metal direction with a riff that could topple mountains, primordial and destructive. There’s a feeling of barely controlled chaos that is bubbling under the surface before the ever more potent drumming of Jimmy Keegan breaks free. The vocals begin, almost shamen-like in their delivery, as if they are speaking an incantation and one that draws you in close. You know that something is lurking in the shadows but know not if it is of the darkness or the light, however, you have to follow your instinct and find out. It is a really vivid and dominant song that brooks no argument. Heartfelt, sombre and slightly mournful, the opening notes to Whitelight just leave your heart in your mouth. This is a passionate plea of a song that seems to linger in your subconscious. Zee’s vocals are wistful and dreamlike and you just find yourself left in a trance, able neither to move forwards or back, your attention on every word that you hear. The delicate guitar and keyboards just add to the atmosphere, a song powerful in its contemplation. The mood is broken by a dark-edged riff and frenzied drumbeat before a hypnotic piano brings a feeling of tension and the close of the song. At nearly eleven minutes, Diary Of The Blood Moon is the lengthiest track on the album and hits you straight away as being the most progressive of the songs too with an intricate play off between the drums, guitar and keys. Driven along by Jimmy’s expansive style and Zee’s brooding guitar it is a hectic ride for the uninitiated. Interspersed with interludes of calm and reflection, it is an intense crucible of musical majesty that bestrides this album like a colossal behemoth. The last two minutes raise the bar even higher with a build up of momentum that intensifies with a fiery guitar solo and dominant rhythm section to just leaves you open mouthed in admiration.

So Zee and Fire Garden have raised the bar even higher with this latest release. ‘Far and Near’ is a magnificent album that never loses focus or intensity and, while it is great to see Jordan Rudess and Jimmy Keegan giving their considerable talents to this enterprise, it is very much the product of Zee Baig and Fire Garden’s consummate skill set. Trust me, as an all consuming listen from beginning to end, this is a definite must buy for your music collection.

Buy ‘Far and Near’ direct from Fire Garden