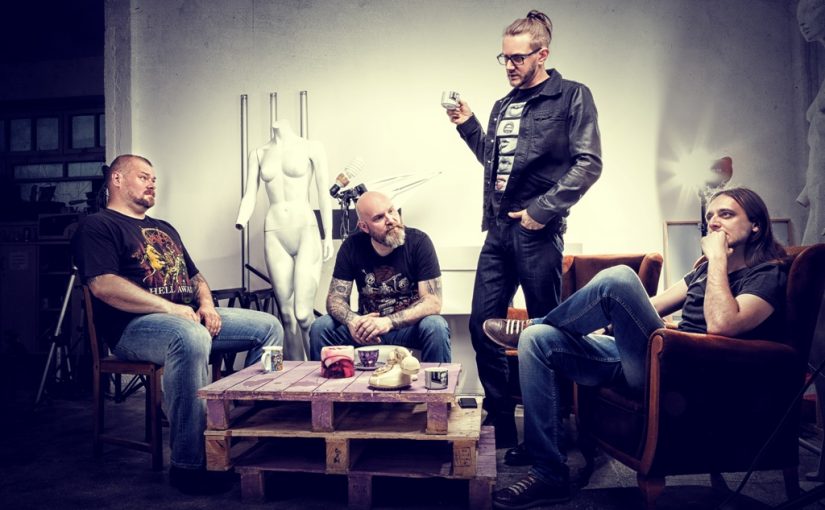 This was meant originally as a preview, but time and tide, as they say… By now many of you may already have this and be making your own minds up. So here is my review…..

Tragedy when it hits is never expected and the devastation, after initial shock, rushes out like waves and ripples flooding over all it touches. Seeping like damp into everyone’s hearts it leaves you cold and numb. Many bands have faced upsets in their lives, some have survived others not. Many losses are through age and/or self abuse taking it’s toll, but when you lose someone before their expected time, it hits hard. Over the last few years Riverside have become one of my favourite bands and watching them ‘live’ last year we got the feeling they were on the verge of breaking through to the next level and greater things.

But fate is a cruel mistress and I was surprised the sudden passing in February of guitarist Piotr Grudziński affected me so emotionally. Then going online to find the outpouring of sympathy from other fans and the support for the other band members, families and friends was overwhelming. Bassist/vocalist, Mariusz Duda then lost his Father in May and further personal issues have dogged him since. He, along with drummer Piotr Kozieradzki and keyboardist Michał Łapaj, could be forgiven for wanting to take some time away, but it is to their credit and the measure of the men that they have decided to continue as a trio and have started to make future plans as well as continuing solo projects in the wings. The band have already issued “Love, Fear and the Time Machine” in 5.1 and last Friday (21st October) they released the double disc instrumental “Eye Of The Soundscape”, a fitting homage to their  friend Piotr.

To misquote from Star Wars, ‘this may not be the Riverside you are looking for’. It is a collection of  ideas the band have composed and accumulated over a number of years, some of which have already appeared as bonus tracks with other albums. There are traces of the Riverside we know and love and the beautiful strains of Piotr’s guitar haunts the melodies, but this extensive work  has more in common with the likes of Tangerine Dream mixed with hints of Kraftwerk and Pink Floyd.

You may be accustomed to my reviewing album tracks on an individual basis, but in this case I feel the album works better if listened to as a whole. It will not be for everyone and with the best will in the world, you will find the direction and length of this formidable album (though the tracks on the second disc are generally shorter) tests you and it may be that only the hardcore Riverside fan will persevere and last the distance.

The ambient mood and atmosphere of this album floats you down a dark river of keyboards and effects, the bass and drums causing the eddy and flow, with the guitar propelling “Eye Of The Soundscape” along a dreamy and immersive journey, some of which will engage you whilst other tracks will wash over you like liquid velvet. Jazz infused saxophone passages echo in the night-lit jungle as you drift along, the large bright moon of sound casting fleeting shadows of effects through the dense foliage of music.

Piotr’s fluid (at times Gilmoresque) fretwork is quite sublime if understated in places, on what some may see as an album of pleasant enough background music, soporific or even uninteresting. Before the devout following tear me to pieces, I hasten to point out I do not fall into those categories as I am also a fan of Tangerine Dream and Pink Floyd and own many of their recordings in my collection along with other ambient classics and instrumentals.

Some may only listen to “Eye Of The Soundscape” once and place the album on a shelf, leaving it to collect dust or brushing it off occasionally to attempt further understanding and convince themselves they do like it; you don’t have to. It will split opinion with it’s diversification but I feel  it stands as a fitting tribute from the band and on behalf of everyone Piotr’s presence touched, to a sadly missed and greatly loved friend. There have been better Riverside albums musically, but none more emotionally charged from a band who truly have remained as positive as possible in the face of adversity. Never losing touch with their fans, sharing visions and hopes and updating everyone with every tentative step along this personal journey, they humble us. The quality of the instrumentation from the band is also first class.

I would recommend you listen before buying to ensure it is for you and those with a taste for the more chilled side of music give it a try, even if Riverside’s previous output has not been to your taste. There is light through this dark tunnel which will see this band emerge to you either as a bright new butterfly or a dull coloured moth, I know which I will follow as it flutters over the musical landscape.

On this occasion it seems only fitting to leave the last words in this review to the band as a parting farewell to Piotr:

“This is our last journey together so we dedicate this album to you, Brother. In our hearts you will stay forever.”

Buy ‘Eye Of The Soundscape’ from InsideOut Music 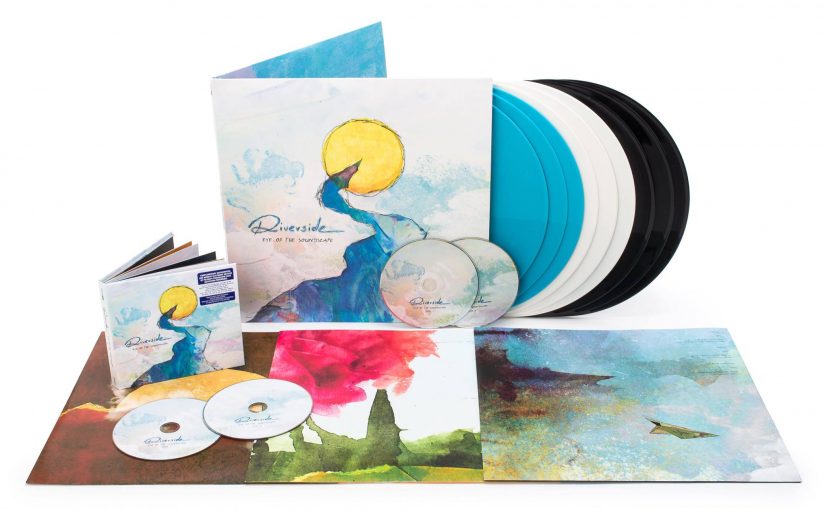 “Eye Of The Soundscape” features 13 experimental and highly atmospheric compositions, previously used as bonus material for the “Shrine Of New Generation Slaves” (2103) and “Love, Fear and the Time Machine” (2015) albums, alongside rare cuts (e.g. a new mix of “Rapid Eye Movement” and the single “Rainbow Trip”, so far only released in Poland) as well as 4 new songs (“Where The River Flows”, “Shine”, “Sleepwalkers” and “Eye Of The Soundscape”) into a massive +100 minutes 2CD/3LP package, which showcases RIVERSIDE’s ambient electronic side.

RIVERSIDE’s Mariusz Duda explained and introduced this rather unorthodox and experimental release as follows:

“I had a feeling that the sixth RIVERSIDE album might be the last chapter of a story. That the future releases might have a different sound, a different character… Unofficially, I called our latest three albums “the crowd trilogy”. Each subsequent title was longer by one word – four, five, six. Six words were long enough as a title and I thought that was the one to finish it off with…

Before we started a new chapter, perhaps a “new trilogy”, I had an idea to release a complementary album. An album in between. An album we had always wanted to record. It wouldn’t be just new music but in our case and in such configuration it would definitely be a new quality because we hadn’t released such an album before.

For years, we have accumulated a lot of material, a part of which was released on bonus discs. I know that some of our listeners still haven’t heard those pieces and do not realise that Riverside, basically right from the start, have been experimenting with ambient and progressive electronic music. And that’s always been a part of our music DNA.

So I presented the idea to the rest of the band and the decision was unanimous. We decided to make a compilation of all our instrumental and ambient pieces, and release it this year as an independent album. Some of the songs would be re-mixed to make them sound better, but most of all, we’d add new compositions.

At the beginning of the year, we locked ourselves in the studio and we started to compose. We even published a picture on our facebook page, in which Grudzien is holding a small keyboard as a joke. That was that recording session. We were working with smiles on our faces, genuinely excited, knowing that this time it wasn’t just a bonus disc or an addition to something “bigger” but a fully fledged, independent release with that kind of music, full of space, trance, melodies and electronics. The day before I got a text message from Grudzien, “I really can’t wait for this release, I have always had a dream for RIVERSIDE to release such an album.”

The release of “Eye Of The Soundscape” therefor also honours late RIVERSIDE guitarist Piotr Grudzinski, who tragically passed away of natural causes on February 21st, 2016.

“Eye Of The Soundscape” is composed of material created between 2007-2016 and concieved in 2015/2016 at Serakos studio in Warsaw with Magda Srzednicka, Robert Srzednicki as well Mariusz Duda as producers, and the release comes packaged in artwork by RIVERSIDE’s longterm design partner Travis Smith (Opeth, Katatonia, Nevermore, etc.).