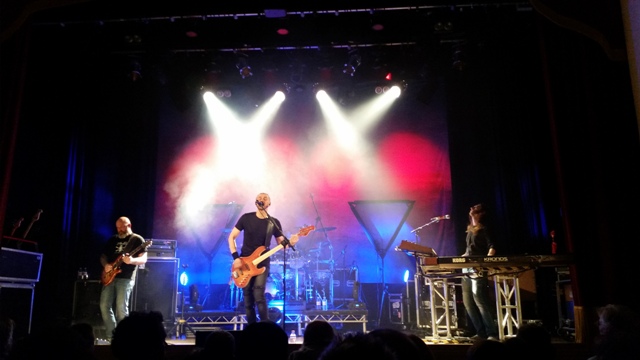 Providing the first live guest review is Aidan Campbell. Not a bad gig either, Riverside live at the Islington Assembly Hall….. The band come on stage around 9pm and launch straight into Lost, the opening song from their new album ‘Love, Fear and The Time Machine’.

Consisting of vocalist and bassist Mariusz Duda, keyboardist Michal Lapaj and founder members Piotr Grudziński on guitar and Piotr Kozieradzki on drums, the quartet are on fine form tonight. The undoubted star of the show, however is Michal, using a Korg Kronos for piano, he creates some wonderful, delicate passages on We Got Used to Us and some mighty Hammond organ on songs such as Hyperactive and The Depth of Self-Delusion.

It is when he gets onto the Sequential Circuits Prophet 5 that the real magic happens.  The pulsating arpeggios adding a futuristic element to the Riverside sound, a song like the superb 9 minute Egoist Hedonist would sound totally different without Michal doing what he does with that synth.

Song wise the highlight for me, probably, is Escalator Shrine. Divided into 3 parts with a mid-tempo first section, a fast heavy second section, with some excellent Hammond organ playing from Michal (he is a fan of the late Jon Lord), and a slow mellow third section.  As the 13 minute track finishes the crowd of 500 give it the biggest cheer of the evening.

Riverside only played 3 songs from the new album but that is not too much of an issue when you have so many great songs in their back catalogue and only 2 hours to play them!

The band end their set with Found, the closing song from the new album and a sister song to Lost, which, together, bookend a very fine album and one of my favourites of the year.  They finished at 10:50pm after playing for just short of 2 hours, everyone going home happy after a great show. I even managed to make it back to King’s Cross in time for the 11:30 train back to Peterborough!