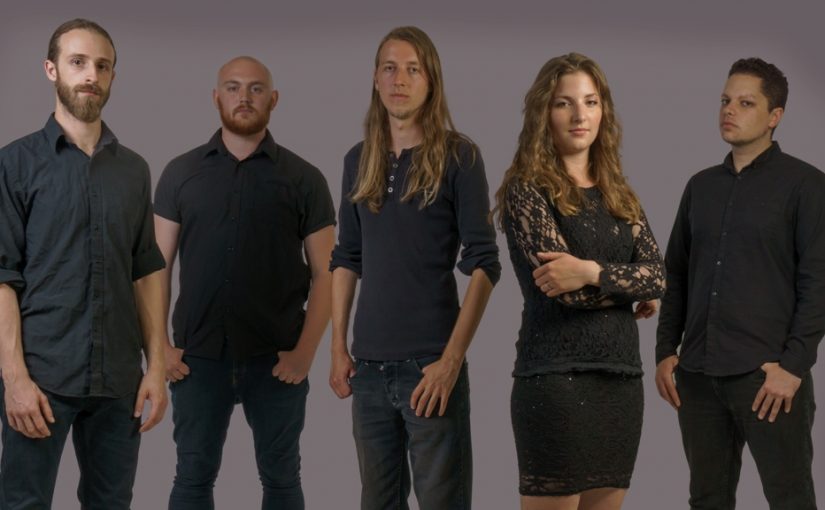 Formed around the nucleus of insanely talented guitarist Luke Machin, and bassist Dan Mash (both of whom have played with artists like The Tangent) their debut album ‘Rubidium’ was released in 2013, and in an unrelated interview with Andy Tillison; he told me that I needed to listen to that album. Now when Andy Tillison recommends something you listen to it, and you know what, it didn’t quite grab me initially where it should have done. Don’t get me wrong, it’s a great debut album and Maschine are an insanely talented group of young musicians, but, for whatever reason whilst I enjoyed it, I never ‘got’ it.

However, this, only their 2nd album (and by some of the music on here, and the intricate blends of sound, would make you think they have been playing together forever) got me from the start, (so much so that, time permitting, I will be revisiting ‘Rubidium‘).

This 5 piece, formed at the Brighton Institute of Music in 2008 feature, as mentioned earlier, the talents of Luke Machin on guitar & vocal, Dan Mash on bass, James Stewart on drums, Elliott Fuller on guitar and Marie-Eve De Gaultier on vocals, flute and keyboard.

With a diverse range of influences across the board, and playing styles throughout the band, their real skill is pouring all these un-distilled musical ingredients into their crucible and creating a striking and original sound. The 6 tracks on here, (the shortest clocking in at over 5 minutes!) all relate to natural events and the interaction between nature and all it can throw at us. This isn’t a concept album as such, but more connected events around which the songs are allowed room to breath and develop.

Boy do they develop, the opening 11 minutes of Resistance, mixes in the beautiful guitar work that both Luke and Elliott bring to the branch, the whole gamut of musical styles and influences creatively held together, with more ideas to spare in these 11 minutes than a lot of bands have in 11 years. The most effective weapon Maschine have is the contrasting vocals of Luke and Marie-Eve, which works together in creating some beautiful harmonies and interesting, counterpoints. And that’s just in the first 11 minutes!!

One of my favourite songs on the album, Make Believe features some amazing vocals from Marie-Eve, with a wonderfully slow build up, whilst the keyboard textures and powerful drum and bass combo of Mash and Stewart hold the piece together allowing an astonishing solo from Machin to burst forward.

The other epic on the album, the closing 11-minute Megacyma recounts the story of the Japanese Tsunami of 2011 through one mans eyes. What a mighty storm of sound they create as the song builds to its climax. They pull out all the stops here, with hints of 70’s classic prog keyboards, heavy riffing and some intense electronic walls of sound, whilst the two voices combine to create a fantastic sound, and the symphonic edge to this mighty finale is absolute perfection.

Of the other tracks on the album, Night & Day with it’s aural soundscapes and WWII story is contemporary prog storytelling at it’s finest. Hidden in Plain sight combines many disparate influences into the nearest they get to a pop song, with some fantastically funky drumming from Stewart and more of those wonderful vocals and Whilst A New Reality is Maschine’s sound in microcosm, featuring some wonderfully fluid guitar, fantastic symphonic keyboard work, and the sound of a band firing on all cylinders. It’s absolutely fantastic that nearly 50 years into the genre we call prog that there are immensely talented creative musicians of this calibre who are prepared to take risks and imprint their musical vision on the genre instead of being held back by the genres self imposed limitations and sounds.

Maschine truly are the future, and this album will firmly cement their reputation as one of the finest bands in this (or any) genre.

A last minute ball over the line for album of the year? Got to be a contender…