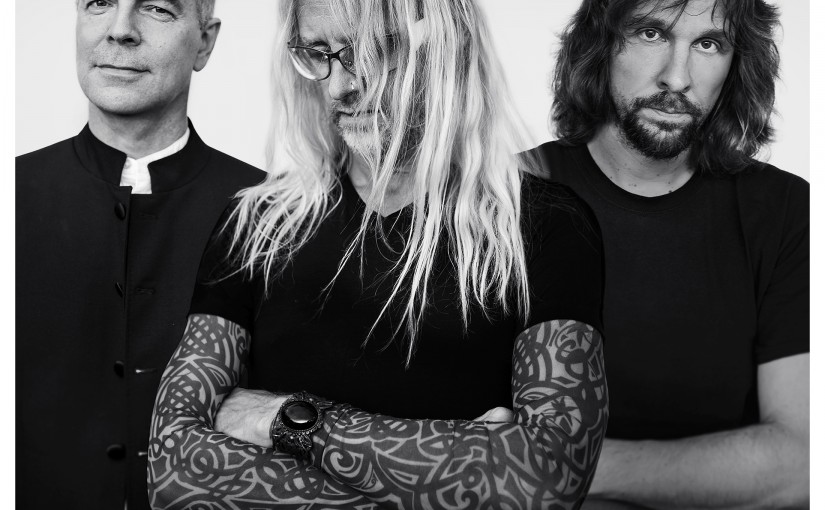 One of the many benefits of living within “the era of Steven Wilson” is in addition to his seemingly bottomless pit of musical projects and his excellent remixing work he also has quite a knack for surrounding himself with top-drawer musicians.

The multi-talented Nick Beggs immediately made his presence felt in Steven’s solo band, not just with his bass and stick playing, but his excellent backing vocals. He provides the harmonic anchor in very much the same way that John Wesley did in Porcupine Tree. When I first heard about The Mute Gods project I was intrigued to hear him take on the main vocal duties himself and the results were even better than I anticipated.

To complete the lineup for The Mute Gods he brought along Marco Minneman, his rhythm section partner from Wilson’s band and also keyboardist/producer Roger King (Steve Hackett) as well as additional contributions from session drummers Nick D’Virgilio and Gary O’Toole.

“Do Nothing Till You Hear From Me” isn’t an actual concept album, but it does have a loose thematic element to it.  The topics include “hacktivists”, government surveillance, religious extremism, Internet trolls, general apathy and many other wonderful elements of life in the 21st century.  But to his credit Beggs mostly wraps these heavy topics in wonderfully accessible, melodic pop/prog confections, allowing the messages to come across without beating you into submission with negativity.

On my first listen to this album I was really surprised by how infectious it was, a very accessible pop/rock sound delivered with the type of sophistication expected from the artists involved. It made me realize that it’s a shame “mainstream rock radio” doesn’t really exist any longer, because I think many of these tracks would sound great while cruising down the highway with the radio blaring. The title track Do Nothing Till You Hear From Me sets the stage nicely.  After an extended keyboard intro (that had me temporarily flashing back to the early 80s) the main driving rhythm kicks in, propelled forward by a muscular bass pulse. In an alternate reality I could see an arena full of people jumping up and down to this groove and singing along with the anthemic chorus. This track stuck in my head like glue from the very first listen. Is is prog? Well, I suppose that’s debatable, but I don’t hear very many “mainstream” rock acts that have the subtlety and musical chops displayed here.

Praying To A Mute God keeps the vibe upbeat with an even more pop-oriented approach but veers off for a little display of instrumental dexterity in the proggy mid-section. This approach is repeated elsewhere on the album, short moments of progressive stretching out used to punctuate otherwise fairly straightforward compositions. The song always remains the focus.

My favorite tracks on the album are a couple of progressive rock gems on the second half; the lovely and ethereal Strange Relationship and the exotic-tinged atmosphere of Swimming Horses. Two of the longer cuts they give the band a chance to stretch out both compositionally and instrumentally. Roger King’s tasteful keyboard choices are worth note on these songs; he uses a nice balance of vintage and modern sounds, always providing just the right tone the composition requires.

For contrast there are a few darker compositions on the album; Feed The Troll, Your Dark Ideas, the instrumental In The Crosshairs and Mavro Capelo. These tracks are a little heavier and a little more menacing, but are scattered throughout the tracklist so the mood never completely dominates. Of these the most successful is the deliciously dark and devious Feed The Troll, it’s menacing but playful at the same time, kind of like a cat toying with a mouse for a while before finishing it off. The only track that doesn’t quite work on the album is Your Dark Ideas; it comes off more silly than intense, but is partially redeemed by the instrumental mid-section and a particularly gonzo guitar solo.

Speaking of playful, there’s a track on here called Nightschool for Idiots (I’m pretty sure I was valedictorian). This song is the very definition of a grower.  When I first heard the album I’ll admit it irritated me to no end, I just found it too sweet, too syrupy, too cute…but with each subsequent listen I liked it more and more and now it’s one of my favorites. This song and Father Daughter stand apart from the rest of the album and feel more self-contained. Father Daughter is exactly what it says it is, a duet between Beggs and his daughter Lula Beggs, the lyrics forming a dialogue. It’s a touching and unique track.

All in all The Mute Gods isn’t quite what I was expecting, but it was a very pleasant surprise nonetheless. I’m hoping we get a follow-up.