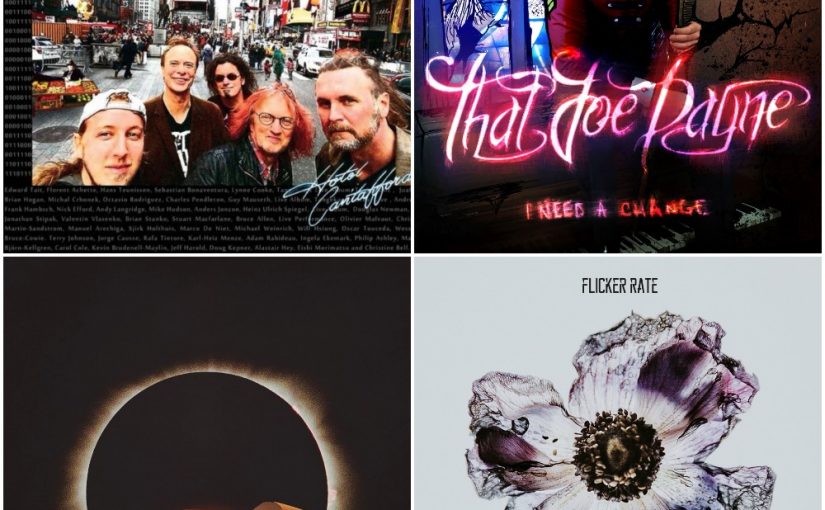 Welcome to another edition of Progradar Recommends and this time I’ll talk about new releases from Tangekanic, That Joe Payne, Toundra and Flicker Rate… I didn’t know what to expect when I went to the Summers End Festival in Chepstow last October with the Prog Guru™ himself, Mr David Elliott. It was a blast, a real home grown, family friendly festival with superb acts and a brilliant atmosphere. One of the highlights was the set from Tangekanic, a touring unit that plays the music of both The Tangent and Karmakanic and features members of both, working together in one collaborative set.

Well the guys took the show to the USA and, luckily for us, decided to record at the New Jersey Proghouse and release it as a live album – ‘Hotel Cantaffordit’. What a stunning release it is, Jonas Reingold – Bass Guitar, Andy Tillison – Keyboards & Vocals, Göran Edman – Vocals, Luke Machin – Guitar and Steve Roberts – Drums  deliver a rip-roaring set full of good natured humour and enough energy and vibrancy to power a small village in deepest Yorkshire!

Opening with an incendiary version of The Tangent’s Spark In The Aether and then a spirited interpretation of the instrumental Dr Livingstone (I Presume?)  from the band’s latest long player ‘The Slow Rust of Forgotten Machinery’, this hybrid band play as if they’ve been together for many a year.

There’s a real camaraderie between them and a fun feeling to their energetic and lively set, the dry asides from Jonas are a particular highlight as is the wonderful version of the Swedish band’s God, The Universe And Everything Else Nobody Cares About, the closing track, Steer By The Stars with a hugely entertaining performance of the uplifting Send a Message From the Heart segued on closes the album in style.

Order direct from The Tangent here That Joe Payne – I Need A Change (single release)

I’ve met Joe a few times and he is a lovely and personable young man so it was with some concern that I heard he had left his role as front man for the legendary prog unit The Enid in September 2016. He was open about his issues with anxiety and depression and thankfully, like the proverbial Phoenix, Joe has risen from the flames and reinvented himself as a solo artist with this first single release, I Need A Change.

The music, written and arranged entirely by Joe, was brought to life in the studio with the help of three other recently retired Enid members; Max Read (singer and producer), Nic Willes (drums and bass) and Duncan McLaughlan (guitar).

I’m sure Joe would be happy with my description of him and his music as being very dramatic and he is almost operatic in his vocal delivery, the lush harmonies that abound throughout the track are a beautiful highlight. I Need A Change is a musical triumph and sees this remarkable front man back where he belongs. There is real melodrama to the powerful music and there is no doubting the breathtaking emotional performance that Joe delivers on his first solo outing.

If this were a vinyl single we would call Moonlit Love the ‘B’ side and it is another superbly theatrical piece of music that shows off Joe’s talents to perfection. If you buy the single you get another five different versions of I Need A Change including piano, strings and choir arrangements which certainly give excellent value for money.

I am really excited to see what this outstanding performer comes up with next! I was very impressed by Spanish instrumental band Toundra’s last release ‘IV’ so it was with heightened anticipation that I awaited the promo of their new album ‘Vortex’, the enigmatic cover certainly helped too!

Their sound blends powerful riffs, beautiful deep melodies and intricate atmospheres, all wrapped up in elongated electric songs that emphasized their dangerous flammable live potential. ‘Vortex’ tales that as a base and then builds on it with repeated layers of powerful and in your face instrumental rock.

Monstrous riffs abound, just check out Cobra to see what I’m getting at, and the rhythm section seems like it was hewn out of solid granite. If you like your music in-your-face, direct, dynamic and, well, bloody loud then you have come to the right place. Touareg is an eight minute monster (as well as a Volkswagen 4×4), the eleven minute brilliance of Mojave does show that band can craft an excellent tune as well and is worth the entry price alone.

I have always been a big fan of instrumental rock (see the Flicker Rate review that follows this) and Toundra have just elevated themselves to the top of my recommendations with “the most straight-forward, heart-stopping, earth-shaking album of the year.”

Order the album on CD or Vinyl from Burning Shed here I know the exact moment when Spencer Bassett stepped out of the shadow of his illustrious father John and became a bona-fide artist in his own right. It was when I stopped considering him to be the son of John Bassett and took the merits of Spencer’s instrumental musical project Flicker Rate on their own standing.

Unlike the monstrous riffage of Toundra ‘Skylight’ has a much lighter vibe, wistful and with a easygoing vibe. The title track has an almost world music feel to it and Cloud Drop and Shimmer take that and add a lazy jazz influence to give it real sophistication and maturity.

Final track Grow has a post-rock vibe at its core and adds even more of an easy going feel to this delightful EP. With his third release and its contemplative and emotive atmosphere, Spencer has proven himself to be a songwriter and musician of some repute and not a little skill, it’s a bout time we got a full-length album from him (are you listening Spencer?).

Keep your eyes out for the next episode of Progradar Recommends, coming soon…