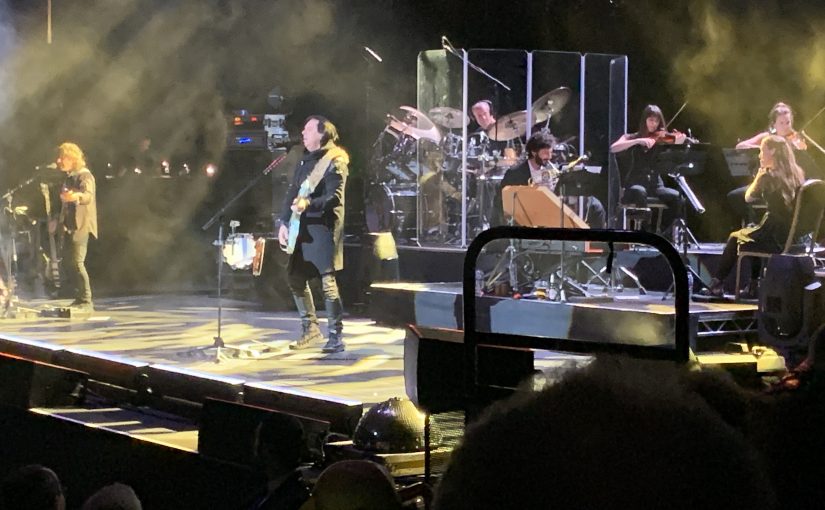 “Marillion, that’s that band with that Fish bloke in, did that song called Kayleigh…?”

If you’re a fan of the very long career of UK progressive band Marillion then you’ll have heard that question many a time. They have made it fashionable to be unfashionable in an ever changing industry that rewards the latest thing, in fact they’ve made a successful career out of it.

So then, how is it that a band most people seem to think ceased to exist in the mid 80’s can sell out the holy grail of live venues for two nights? There’s two reasons really, first because of a fan base that revere and love them (almost obsessively, if last night was anything to go by) and, secondly, because they are a live experience that should be on your bucket list!

Having played the RAH two years ago with a six piece orchestra, Marillion have decided to reinvent some of their tracks that they feel fit especially well in that format and are releasing an album (Marillion With Friends From The Orchestra) at the end of this month.

So it made sense to go out on a UK tour to promote the album and play in venues that would give the format some stunning backdrops? Of course it did!

The evening started with a short support set of cleverly crafted singer songwriter material from the talented Harry Pane, whose short but enjoyable acoustic guitar and double bass material was warmly received by the building audience.

However it was the main event that everybody had come to see and as the six piece orchestra walked on to the stage, followed by the band, the anticipation of the audience could literally be felt.

Marillion launched into an intense version of Gaza with frontman Steve Hogarth prowling the stage like a tormented soul, his on stage persona and antics are always an integral part of the band’s superb live shows.

The light show and backdrop graphics added to the intensity of proceedings as the band played a set littered with their greatest songs, twenty minute plus tracks that flew by leaving the audience at times speechless and at others rapturous and raucous, the alcohol maybe giving vent to some 50 and 60 year old fan’s long years of admiration where normally they would be more reserved.

The orchestra fitted in seamlessly with the strings bringing a euphoric feel to the somber brilliance of Estonia and lifting my all time favourite Marillion track, Season’s End, to incredible new heights, Steve Rothery’s solo bringing a lump to my throat and I’m sure I had something in my eye…

A wonderfully theatrical version of The New Kings from the band’s latest album F.E.A.R had the audience hooked on every word, engrossed as Hogarth led us through the mire of the modern world and this was followed by a brilliantly spirited Man of a Thousand Faces that had the audience singing along.

This once in a lifetime experience was finished by a two piece encore starting with a rocking take on Seperated Out with an excerpt from Led Zep’s Kashmir that even had the orchestra rocking out.

Things finally came to a close with an emotive and tumultuous version of long time fan favourite This Strange Engine that ebbed and flowed superbly for over twenty minutes before bringing the house down with heartfelt applause and adulation.

Thirty years on from when Steve Hogarth joined the band, Marillion still do things there own way. They did crowd funding before it was fashionable and they put on a live experience like no other. On nights like these they are untouchable to their fans and long may it continue. Now, who’s that Fish bloke…?

King Crimson celebrate their 50th Anniversary this year. As part of these celebrations they will perform a trio of shows at the Royal Albert Hall on 18th, 19th and 20th June and special concerts across three continents, including both festivals and headline shows.

This very special group of musicians has allowed the band, for the very first time, to access material from throughout King Crimsons long history. In fact, since 2014, they have played a large number of historic pieces which have never previously been performed live, as well as old favourites, and their own newly written material.

The shows are regularly around three hours long, with a setlist newly written each day by Robert Fripp.
Founding member Robert Fripp who has been a constant throughout the bands history recently observed the Anniversary with an exclusive one-day event in London which was attended by worldwide media. The event included a presentation by film director, Toby Amies who is currently editing his forthcoming King Crimson documentary Cosmic F*kc which will be released later this year.

Completing the availability of all of King Crimson’s studio albums from 1969 – 2003 in hi-res stereo & 5.1 surround sound.
More releases follow later in the year.