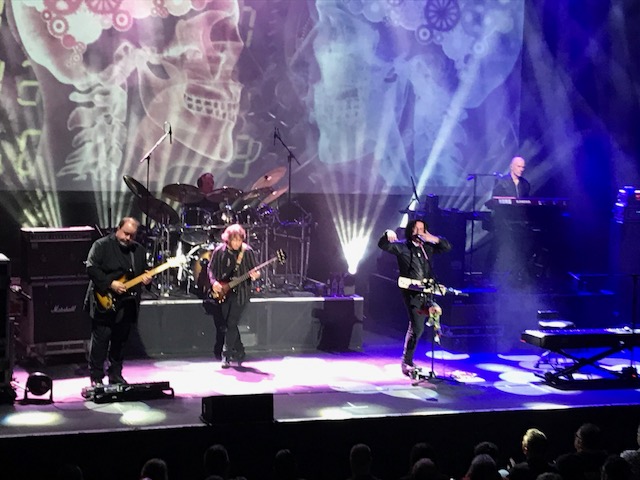 And that, my friends, made what was already an incredible, emotive and stunning gig by one of my all time favourite bands the best gig I’ve ever been to. Yes, it was that bloody good!

Now I know I’m a lucky sod, I get to go to all sorts of live music events for free just because I write (hopefully, pretty well) about them but this was something different. I’d gone with one of my oldest friends (and a Marillion gig virgin) and we were meeting my great friend Iain Sloan of Wynntown Marshals and Abel Ganz fame (to name but two!), who had made the long journey down from North of the border, for a quiet beer or two before the show (see picture above). York Barbican is a great venue, quite intimate while also having a very decent capacity and brilliant sound. This created a suitably intense atmosphere as the crowd built awaiting the support act Roxanne de Bastion. This talented singer/songwriter came on to a big round of applause from an already three quarters full venue. Roxanne had broken her left ankle before the tour began but took it all in her stride as she sang her haunting and beguiling songs with more than a flavour of roots music to them. With stories garnered from personal experience she managed to keep the attention of the crowd and her voice and pared back, simple guitar and piano playing were pretty impressive. The only issue for me being that she did look slightly out place on her own in what is quite a big venue, not that this affected her performing in any way. As an appetite whetter before the main event, I was very impressed and this gifted musician is one I will be seeking out in the future. A dynamic and powerful opening salvo of El Dorado got the crowd going immediately and you sensed that the band were on good form as an ebullient Steve Hogarth prowled around the stage, his animated delivery a real highlight. This was immediately followed by a seriously compelling version of Power that had electricity sparking around the venue, Steve Rothery’s superb guitar playing making the hairs on the back of my neck rise, you just knew tonight was going to be a mesmerising experience.

All of the band were playing with fluidity and an almost carefree attitude, perhaps it was because it was the last night of the tour but, for me, they were putting all of their heart and soul into every note and every word. Captivating versions of Quartz and The Party followed as the band went through their repertoire of carefully chosen tracks from over 30 years of making emotionally charged music and the adoring audience lapped it all up. It was like being in the middle of a cult but a wonderfully civilised one. There were standing ovations at the end of every track, Marillion could do no wrong tonight…

And then they played bloody Seasons End…What a spine-tingling, jaw dropping eight minutes that was, one of my favourite all time songs played by one of my all time favourite bands and with a guitar solo that soared to the heavens and was so full of emotion that I was lost in reverie. After the rapturous applause had died down Marillion delivered a thunderous performance of Living In Fear, the second track from current album ‘F.E.A.R’, one that seems to have given the band a new lease of life and attracted quite a few new followers to these veterans of the progressive scene.

The setlist took a ninety degree turn next as a band full of the confidence of a succesfull tour traded banter with the appreciative audience, Steve Hogarth asking Mark Kelly if they could swap Out of This World for a fan suggested White Paper and, to the cheers of the audience, they did! There was a real warmth and humour evident throughout the evening, the band were relaxed and obviously enjoying themselves and that came through in the performance. A stirring rendition of The Leavers followed by Wave and Mad ramped the atmosphere through the roof, here is a band at the height of their not inconsiderable musical powers, Pete Trewavas bouncing around the stage and engaging in some gentle banter with Hogarth while Ian Mosley was an animated demon behind the drum kit, as ‘h’ would say, a bloody impressive pub band indeed!!

The set was completed by a blistering Afraid of Sunlight and a truly emotive performance of perennial fan favourite The Great Escape that surely had more than just a few eyes moist. At the end of every track virtually the whole theatre were on their feet cheering and clapping, just lost in the wonderful moment. You know when the band leave the stage that there is going to be an encore and what an encore it was, a poignant and evocative Easter which contained possibly Rothers’ most impassioned solo ever and then a reverently received version of Sugar Mice that left the audience emotionally charged.

At this point I left, hoping to avoid the crowds but the opening notes of Garden Party had me rushing back in to the side of the stage to experience what was a group of friends enjoying themselves and playing music that they truly love, it was just magnificent!! This time the crowd really did go wild… So, there you have it, Marillion live at York Barbican, music really has the power to move you and bring a lasting joy to your heart and soul and, on this night, I had my most special musical epiphany ever and it just doesn’t get any better than that.