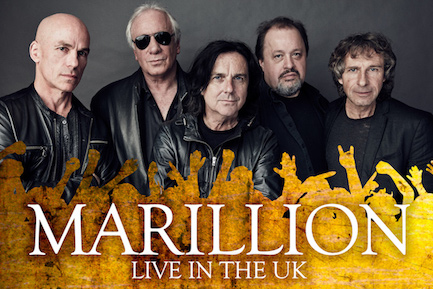 Prog rock giants MARILLION announce 7 new UK dates in April 2018 on the back of their October show at The Royal Albert Hall, which sold out within four minutes of going on sale, and The London Palladium in November, which also sold out in record time.

MARILLION’S music is more than prog, it’s musically-experimental and yet-emotional. Within the genre it has a uniquely soul-baring aspect which sets the band apart and has elicited an almost religiously zealous following.  After nearly 40 years, the band has evolved into a vibrant and international musical force, flourishing seemingly outside of fashion and mainstream media exposure. Since their formation, they have had 19 Top 30 singles, four of which made the Top 10.

Their most recent album, F E A R (Fuck Everyone and Run), peaked at No. 4 in the UK album charts and No. 1 in the rock chart last year and was given a 5-star review by The Guardian.

Steve Hogarth says: “I have been part of this band now for 27 years and it barely feels like 10. I think we’re as inspired as we ever were, and we’re still enjoying creating together. Luckily our music has remained free to evolve and change without the constraints of a corporate music business which otherwise might have killed us.

By reinventing the business-model we have maintained a one-to-one relationship with our fans, and that feeling is never more apparent than at the live shows. It’s always a pleasure to share a room with “the family” and exchange the passion on stage with the passion off stage.

We’re playing a few places we haven’t visited for a while. Long overdue. ‘Really looking forward to this little outing.”

MARILLION are not just musically innovative… they are widely acknowledged to be the first band to use the-now-commonplace crowdfunding scheme. Pledge Music and Oxford University have acknowledged that the band invented the business model. In the late 90s, fans sponsored an entire US tour.  Their first crowd-funded album was Anoraknophobia, released in 2001.

Winners of a staggering EIGHT Categories in 2016 Prog Mag Awards (see Notes to Editors), MARILLION elicit remarkable devotion from their international fan base.  To those who already love MARILLION, the band is something special. To the uninitiated, it’s a love affair waiting to happen.

On October 13th, MARILLION released an EP on earMusic featuring a live version of their epic “Living In F E A R” “Living In F E A R” which hit the no. 1 spot on the physical singles chart for 2 weeks.   The EP comes in limited CD Digipak as well as in a limited and numbered 12” Vinyl Edition, which includes three additional unreleased live songs. Let’s get this out of the way first, I have been a Marillion fan, since ‘Market Square Heroes’, not as fanatical as some but have every album from both eras and solo projects. I have seen them many times live and they have seen me through the highs and lows of my adult life, always there to bring wonder, amazement and comfort. I refuse to choose which era I prefer as both are in their own right part of a greater whole that make this band not only one of the greats of Progressive music, but one of the best bands I have ever heard. Pioneers of crowd-funding they created a whole new ecosystem in which to survive and prosper, where others fell to the whims of the press when the genre stumbled to the fickle fancies of the general great unwashed.

If we are to believe that life is one big cycle, everything must come around again, as in fashion and also the popularity of music. The quality of Marillion’s output and personal symbiosis with their adoring fans have carried them over a 38 year career and eighteen albums, quite often against all odds, and shown the way for others to follow. Free from the shackles of large labels and self sufficient it has enabled them to create under their own rules a beautiful distinctive sound. They have never really ‘gone away’ or ‘made a comeback’, producing consistently strong material. It is to be expected then that a band who have always been able to make social comment, (‘Easter’, ‘Season’s End’, ‘Brave’….) and are not afraid to tackle uncomfortable subjects, should go all out on the new album to try and prick the conscience of the human race and open our eyes to the mess we are making of this wonderful planet on which we have the privilege to be born.

Why is it we, who consider ourselves the ‘superior’ race continually attempt to waste all before us with greed and want, when in reality there would be plenty for all if only we would look after the world we live in and work with and not against the planet and everyone on it. Such is the constitution of man, but there is no fantasy in the fact we are pushing ourselves to destruction and there will be no happy ending if we do not change our ways, Mother Nature will have her revenge on the pretentious, foolish notions that we can control her. Can the New Kings save us from ourselves through the message of music, it would be naïvely sweet to think so and the intention is sincere. Whether it does depends on you dear listener, but for myself the lyrics may serve to open my eyes, but the music opens my heart. Listening to Marillion makes me feel I want to be a better person and fills me with a warm glow. Previews and internet gossip may, erroneously lead you to believe this is decidedly different from previous albums, it’s not. What you will hear is the culmination of personal experience spread over four decades, condensed and poured like liquid gold into your ears, on what many may feel are some of the best tunes the band have ever written. All brought together on an album that dares to try and topple ‘Afraid of Sunlight’ from my ‘favourite’ spot.

Let me try and convince you a little further, are you sitting comfortably? Then I will begin….

Our first story warns of  an impending dramatic change in the five piece El Dorado. The album title sung so sweet a chorus, you could almost be forgiven for mistaking the impact it aims to create. This is not flippant or irreverent comment meant to shock, rather to indicate the evil that men and women do and what it generates in humanitarian, ecological and financial terms. Ignorantly disregarding the warnings of disaster we are bringing on ourselves, the analogy of a devastating, approaching storm illustrating our shame exquisitely. What future are we creating and what legacy will we leave our children and future generations?

The next tale urges us to seek an end to wars and work to universal peace, no longer to be Living in Fear. You could be forgiven for thinking the band were trying to create a ‘Hippy’ utopia with the 60’s echoed sentiments, but in a world that that has grown increasingly bitter and violent, maybe those with flower power had something greater to offer us after all. Mocked, before their time, and over-dramatic with portents of an all too scary real life in which we now live. Who are we now to cast aspersions, seeing them as just a quirky trend in the past only makes fools of us now. An infectious chorus will dig into your consciousness, lodging there and carrying the new day message of hope, should we ignore it or join hands across the world in harmony? Almost an antithesis to Thankyou Whoever You Are from the album ‘Somewhere Else’, as a pentagonal prosopography, The Leavers is the narrative of a band and crew’s life from a behind the scenes perspective. The constraints of a life on the road, showing a more personal tale of the strain on all involved. Constantly on the move, setting up/packing up and repetitive routines. Hardly ever home and when you are, restless, never fully settled whilst something tugs at you, drawing you back to the nomadic world you have become accustomed to. The testing of relationships as you struggle to fit into the family dynamic and their daily rituals, the feeling of being an intruder. Each section of this extensive song segues into the next as the band smoothly slide between passages.

Steve Hogarth’s heartfelt vocals perfectly catch the requisite emotion for the rest of the band to feed from, creating layers of luscious strings at the fingers of Messrs Pete Trewavas  rhythmic bass and Steve Rothery’s soaring guitars, intertwining with the percussive symmetry of Ian Moseley’s drums, all laid on a quilted bed of  Mark Kelly’s delicious keys. The coherence of the the band’s music on this album has never been more tangible and a further fitting analogy as to what we could all achieve if we worked in harmony together for the common goal, in their case this beautiful thought provoking album.

The delicate piano and wistful vocals illustrate our ageing, which can creep up on us as the realisation dawns we can no longer mentally or physically do all we could or would like to. We all too soon become observers of The White Paper on which we have painted our lives. Visiting our past whilst we innocuously watch the world pass by. Bitter-sweet, verging on regretful reflection of what we lose, as the music builds  for the yearning of youth when everything was fresh and colourful, rapidly resigned to greyer shades of obscurity. Could we, should we have done more whilst we were capable? What have we not unearthed in dark depth from our tales so far? Ah, yes, greed and corruption. There is no ‘need’ for some but a ‘want’ to own, take control, hold dominion over those below and less fortunate at any cost. There is always someone whose avarice will override their common sense of decency in a corrupt corporate society where power matters to The New Kings above all else. Revelling in others’ misfortunes whilst building empty steel and glass castles to their vacuous domains, in which the echoes of the titled chorus ring. Any assumed pleasantries in previous tracks are disregarded on this epitaph of the evil that men do, dispensing with the subtleties to expose the core of this world’s impropriety.

This album resonates on every level of my senses, be it my own advancing years that force me into the realisation that in my humanity I too have been guilty, on however a small scale, to some of the above at some stages in my life. Before I put my soapbox away I would like to end on this. It is not someone else to blame, it is not someone else’s fault. We are all accountable. Wake up and smell the roses, whilst they still grow. Stand up and be counted. Do not live in F.E.A.R.