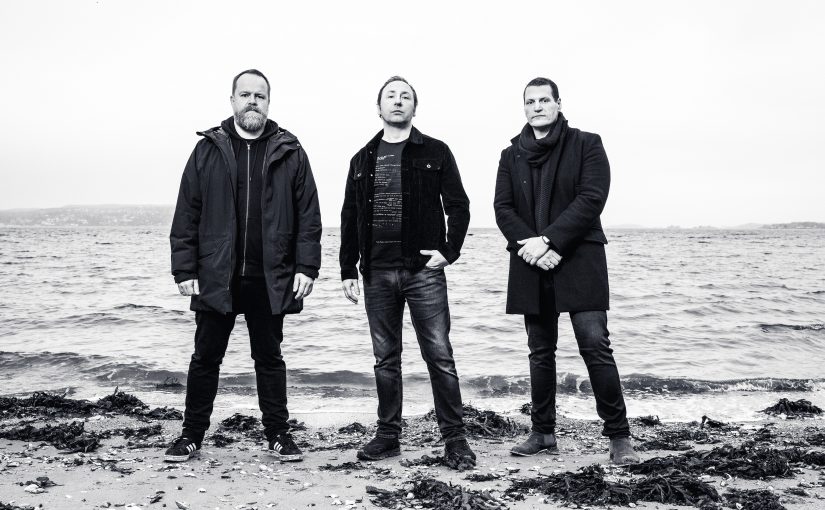 “No matter how corrupt, greedy, and heartless our government, our corporations, our media, and our religious & charitable institutions may become, the music will still be wonderful.” ― Kurt Vonnegut

Crikey, there’s a quote that’s stood the test of time and how true it is. I am sat here listening to the much anticipated new album from the Norwegian masters of artful, melancholic prog, Airbag and it really has hit a nerve in the times we are living in. The soaring solos and mournful vocals paint a sparse musical scene but stir the soul and touch the heart in ways nothing else can.

‘A Day at the Beach’, the band’s fifth album, was released on 19th June, a mere four years after its predecessor ‘Disconnected’. Lyrically, it is very much a story of us and them, told by a husband, father and brother leaving his family behind into an unknown future. It’s the contrast between the desperate individual struggling to survive and people in power observing at a safe distance.

For the production of “A Day at the Beach”, Airbag has once again teamed up with long-time collaborator and engineer Vegard Sleipnes and it was mastered by Jacob Holm-Lupo. The album is produced by Asle Tostrup and Bjørn Riis and, as always, the cover is designed by vocalist Tostrup. The album, which is their first as a trio, also features talented guest musicians including Kristian Hultgren (Wobbler).

‘A Day at the Beach’ consists of six new songs recorded during autumn and winter of 2019-20 and inspired by the resurgence of 1980s electronica, new wave and movie scores. The album is an ethereal soundscape of cinematic vastness with a brooding, primeval backdrop.

Asle Tostrup’s vocals almost have a krautrock sensibility to them as he delivers each perfectly enunciated word. The music is full of tension and yet there is a wistful, almost nostalgic undercurrent that lies beneath. Central to the band’s sound is the incredible guitar work of Bjørn Riis, the vivid precision of his playing lends an otherworldly aura to every track and when he unleashes a solo it is a thing of iridescent wonder.

Every track is a mesmerising wonder of restrained grace, elegance and class with world weary feel deep at their core. Opener Machines And Men is ten minutes plus of Scandinavian theatrical brilliance with a driving, graphic urge that almost puts you in fight or flight mode and the complimentary A Day at the Beach (Part 1) puts you in a state of calm reflection with its laid back, almost intangible air washing over your senses.

The highlight for me is the utterly magical Into The Unknown, a mesmerising two-part melting pot of electronica inspired synthesisers, beats and percussion complimented by Asle’s halting vocals and a faint, background guitar that fades out before returning in all its guitar blazing glory. A jaw-droppingly brilliant piece of music that I listen to all the time, the guitar playing is just entrancing and spellbinding and will take you to another world (unfortunately only metaphorically!), take a bow Bjørn…

Sunsets is a much more in your face and urgent song with a rather funky bassline that is delivered with a compelling and weighty overtone. A powerful guitar riff, dominant drums and an authoritative vocal driving the track along with a much heavier vibe before swathes of stylish keyboards and punchy guitar wash over you. A Day at the Beach (Part 2) is an instrumental that gives a Scandinavian left field vibe to a Tangerine Dream soundscape, it draws you in and captivates you with its mesmerising repetitive tone.

The album finishes with the heart-rending, raw brilliance of Megalomaniac, near ten minutes of painfully exquisite music that leaves nothing out, like a soul laid bare for all to see. It builds slowly with Asle’s touching vocal and Bjørn’s haunting, plaintive guitar and the ever present edge of the percussion, digging deeper into your psyche and breaking down any barriers. A harsh, strident guitar riff then breaks clear before an utterly majestic guitar solo, full of pain but countered by pathos, dominates the song, leaving you spent and overcome with emotion.