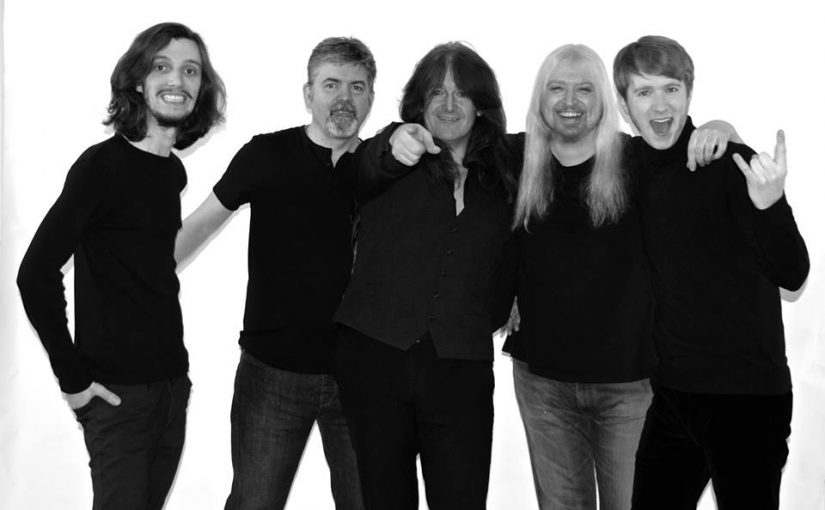 “You may encounter many defeats, but you must not be defeated. In fact, it may be necessary to encounter the defeats, so you can know who you are, what you can rise from, how you can still come out of it.” – Maya Angelou

Let’s face it, nothing good in this world generally comes easy. We often have to endure hardship to see the light at the end of the tunnel and the gestation of ‘Cycle of Life’, the debut album from Cardiff based band Ghost Community, has certainly seen many trials and tribulations before, finally, coming to fruition.

In fact their own publicity information goes so far as to say,

“‘Cycle of Life’ was written through a maelstrom of adversity and sometimes you can hear it but not necessarily feel it, because this is an album of hope; and if we ever needed an album of hope, it’s right now.” (this picture and featured image courtesy of Catherine Summerhayes)

Riversea vocalist Marc Atkinson was the original singer but was unable to commit to the project on a long term basis, however, some of his original vocals do appear on the album.

“We’re all in this together……. I am so glad he is on the album. He started this journey with us so, it was only right.”

With much crisscrossing the country through the years in various bands and with each person sharing the same stages, frequenting the same scene, and forging firm friendships, discussions inevitably began about creating something new together, as a band. With the wealth of experience they brought to the table, they knew they could make this band something that not only met the needs of their own musical desires but would also, be a band for everyone. Ghost Community is that band and that dream, come true.

Matty feels that the music community has come together  to support Ghost Community in their endeavour, he told me,

“This is what the music scene should be about. Everyone helping each other. That is the ethos behind Ghost Community. It is about every thing working because we all need each other to make it work.”

“Trust me, music has saved me on more than one occasion. It drives me mad sometimes but, it’s in me and I never want to be without it. That is why this album is so important…”

With the brilliant Bruce Soord (The Pineapple Thief, Opeth & Katatonia) mixing / producing the album with the band, hopefully there is something special awaiting me. Opener Rise Up seems to bloom from almost out of nowhere, a low key intro before the stylish bass and guitar power into view, dragging the impressive drums along with them. One thing is immediately apparent, John Paul Vaughan has a stunning voice and one that fits with the material perfectly. There is an urgency to the song, one that keeps you on your toes. It flies along at a fairly hectic pace but loses no quality at all. I’m put in mind of some of the recent stalwarts of British progressive music like The Reasoning and Also Eden (no surprise there) but the band give it their own polished edge and identity. Simon Rogers shows his zen like guitar skills with a fiery, burning solo and, basically, you are having a rollicking good time. Driving all of this along is the dynamism of Matty Cohen’s superb bass playing and Jake Bradford-Sharp’s pin sharp drum skills, Moray Macdonald’s vibrant keyboards are the glue that holds everything in place. There is a vocal piece towards the end that reminds me so much of Peter Nicholls of IQ fame, John Paul has a really distinctive voice and this track is a brilliant way to open the album, right, what’s next? Distinctive guitar, gentle but insistent, opens Mirror Lakes, a more laid back track than the previous. The vocals are key at the start of this song, giving a focal point around which the languid music can flow with ease. Then the powerful drums and bass hit you hard along with a powerful riff from Simon’s guitar. There’s an ebb and flow between the relative calm of the verse and then the in your face potency of the catchy chorus which is actually quite addictive and has you singing along with gusto. I find myself picking out the individual instruments at times, the drums almost have a life of their own, the guitar playing is really quite sublime and the keyboards give added verve and fervour. On this track, what really stands out at times though is that driving bass line, almost with a mind and will of its own and all these impressive musicians segue together to provide a stylish run out to end the song. Anything and Everything has a pensive opening, almost sci-fi in feel, with the industrial synth sounds. The drums dominate the soundscape with the guitar adding gloss before the vocals begin, low-key and contemplative. There’s a feel of melancholy running through the song even as the pace picks up and the track gets more urgency, it s a darker, more sombre song that leaves you in a thoughtful mood. Just out of reach, but very evident, there’s an 80’s synth pop party going on, Midge Ure and Ultravox have turned up to jam with the Ghost Community boys and Moray’s keys get a real extended workout on this track. For a child of that decade there is nostalgia to be heard and felt at every turn and wry and wistful smile never leaves my face. A great song that is surrounded by a wistful aura throughout. There is a delicate fragility to the opening to Blue December Morning, you can almost imagine a cold, frosty day with the icicles hanging from the sparse branches, bleak but beautiful. John’s vocal is affectingly humble and sincere and the music adds its own gravitas with lush string-like keyboards and an elegant piano giving a pared back ambience to the whole song. There is an almost heavy-hearted and poignant feel to the lyrics but the song shows there is beauty even in tribulation as a darkly magnificent solo flows organically from Simon Rogers’ eloquent guitar to leave you lost in your own thoughts. The vocals become more impassioned and the music stimulates you even more as this intelligent and potent track comes to a stirring close. Heartening and uplifting, the organ, vocals and guitar that open Ghost Community are full of hope and optimism and this feel-good track carries on in that vein to give an atmosphere of confidence and belief. An influential and charismatic rhythm section give real impetus to the music and the vocals have a compelling tone to them, one that makes you sit up and take notice. There is energy aplenty running through this song with hooks firing from left, right and centre. The absorbing lull in the middle of the song brings a note of seriousness to proceedings, hope and optimism are all good but nothing comes easy in this life, you have to work for every positive outcome. That mantra is drummed into you as the song comes to an intricate close. So it all comes to this, the final track on the album and the title track Cycle of Life. With a title like that it should be an epic shouldn’t it? Well, for starters, it’s nearly sixteen minutes long and starts with an ominous voice over so that’s a couple of boxes ticked already! An unpretentious acoustic guitar and John Paul’s deferential vocals add serious dignity to the song before Matty’s pulsating bass and Moray’s keyboards lay the foundations for the track to move up a notch or two with an energetic riff and sweeping keyboards taking the baton and running with it. Jake’s drums get to shine again and all the components are present and correct for something rather special. Like all the best extended progressive tracks, it seems to flow seamlessly from section to section, sometimes showcasing the exceptional guitar work and , at other times, allowing the uber-tight rhythm section to take centre stage. John Paul Vaughan’s singular voice repeatedly requests that,

“Passengers get on board, welcome to the Cycle of Life….”

Before the voice-over precedes an undulating lull in proceedings, everyone treading water before the mantra is repeated again. It’s easy to get lost in the wondrously labyrinthine twists and turns that abound in this dramatic and profound song but the band will always guide you back to safety. An acoustic guitar returns us to place of calm and serenity, the cultured vocals soothing any troubled souls as you sit on a metaphorical shore of endless possibilities, it only takes a second to change your life so what are you waiting for? A rather inventive and perceptive instrumental section brings us to the close of this creative track and, as the last note resonates into the distance, you sit quietly to ruminate on what the last fifty-one minutes has given you.

Buy ‘Cycle of Life’ direct from the band at the link below: