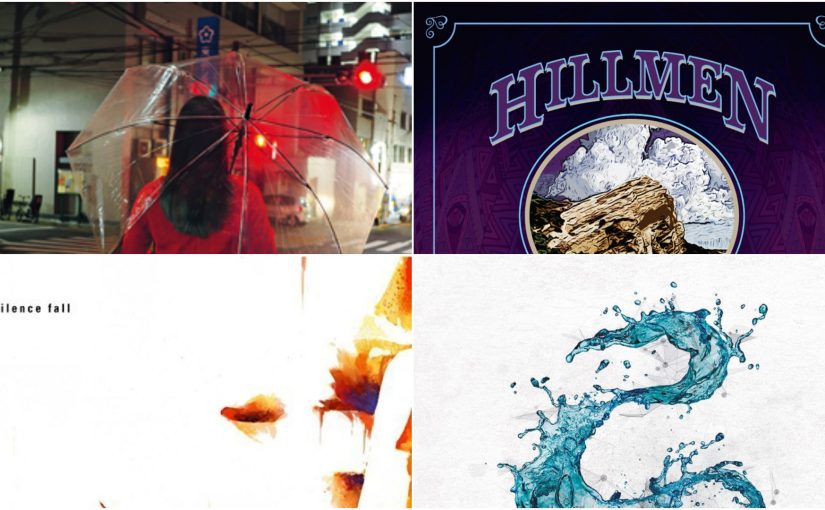 Here we go again folks, another episode of my recommendations and have we got some pretty powerful and intense stuff for you this time so, without further ado… Intense and complex cinematic art rock with a heavy progressive feel, that has been the core of German band Frequency Drift’s sound for a long time. Their previous album ‘Last’ (2016) is a case in point. With a penchant for the dramatic and sophisticated these impressive musicians have always delivered very emotive albums.

‘Letters to Maro’ takes that succesfull format and builds on it impressively with the addition of the soulful vocals of Irina Alexa to the core of Andreas Hack, Nerissa Schwarz and Wolfgang Ostermann. Irina also adds a subtle influence with her writing style and lyrical implementation.

Where ‘Last’ was underpinned by the heavy guitars, this new album is much more rounded sonically and there’s an inherent melancholy and lightness to the soulful and emotive music and it results in a vivid, melodramatic musical experience that will leave a long lasting impression on you.

‘Letters to Maro’ is more than just a collection of songs, it is a hugely involving, artful and immersive experience that everyone one should experience at least once. “Recorded in a smoke filled private studio high in the coastal mountains of Southern California, ‘The Whiskey Mountain Sessions Vol. II’ is forty minutes of contemporary instrumental music at its dynamic best. Hillmen features the talents of Peter Hillman (Kiss The Frog) on drums, Gayle Ellett (Djam Karet) on keyboards, Jeff Smith (Insects vs. Robots) on bass and Lito Magana Jr. (Mestizo Beat) on guitar.” – so says the press blurb for this intriguing album of so-called Free Improvisation music.

This is raw, unfiltered music written without even a score and recorded in one literal ‘jam’ session. Opener The Long Way Home is full of psychedelic guitar, dreamy Minimoog synth stylings and incredibly laid back jazz drumming. Whiskey soaked, smoke filled bar nights come to mind on this super laid back track. Rhodes electric piano, Minimoog, vintage guitars and amps are combined with state of the art recording technology to generate a warm, unique sound.

The vibrant feel continues throughout the rest of the album and leaves a permanent grin on your face, nostalgic and yet forward looking this release showcases the magic that can come from improvised music, music that can grow and evolve over time.

Get your hands on this exceptional and singular release, you won’t regret one minute of it!

Listen to an edit of The Long Way Home here I was a fan of the last Deafening Opera album ‘Blueprint’ which was a real progressive feeling record so I was very happy when this new release popped through my letterbox. ‘Let Silence Fall’ promised to be an evolution in every regard which did make me a bit nervous but after the first listen this excellent German band had delivered superb musical theatre once again.

With a more modern, even symphonic, delivery this concept album is a rich musical tapestry of passionate vocals and thunderous guitar riffs entwined with more delicate and emotive pieces to give an all-encompassing theatrical musical experience.

Showing a maturity and sheer complexity and depth, Deafening Opera not only prove themselves to be very proficient musicians but master storytellers as well as this involving dramatic piece of work ebbs and flows effortlessly. Showmanship as much suited to the stage as to a recorded work, it is a highlight of the year for those of a symphonic rock persuasion.

Order the album direct from the band here There’s some really good music coming out of France. I’d heard of Weend’ô but it wasn’t until I’d made their acquaintance at last year’s Summer’s End Festival that I really got to see and hear how good they really were.

A group of talented and consummate musicians fronted by the amazing vocal talent of Laetitia, a singer heavily influenced by Anneke Van Giersbergen and one who has completely transcended any such comparisons now. The band’s sound has previously been described as falling somewhere between Pink Floyd’s more ambient moments and the modern riffs of Tool, a fair comparison although I feel they are ploughing their own unique musical furrow nowadays.

Atmospheric rock music with prog-tinged hues and a real under current of the blues to the fluent guitar playing, I find it totally addictive and fronted by Laetitia’s sultry rock voice it takes on a whole life of its own. ‘Time of Awakening’ is a call to humanity to keep faith and hope despite the appalling events currently afflicting the world. Discussed in the wistful and ethereal hymn Elea, nothing can stop the true evolution…

Seven songs, forty-three minutes long, this deeply engaging album will immerse you in Weend’ô’s singular musical world and it is a place you may find exceedingly difficult to leave. This wonderful album is definitely my unexpected find of the year so far for 2018. 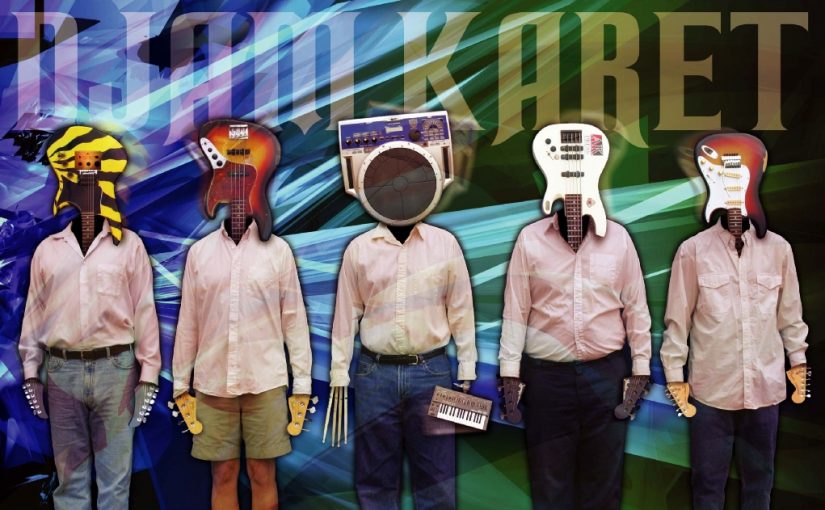 Djam Karet was founded in 1984 by guitarists Gayle Ellett and Mike Henderson, bassist Henry J. Osborne, and drummer Chuck Oken, Jr., and continue making new music even to this day, 33 years later! So far … they have released 18 full-length albums, including the newest release ‘Sonic Celluloid’ (as well as an additional 24 minor releases and EPs and compilations, see the discography).

Compared by the press with King Crimson, Pink Floyd, The Grateful Dead, Ozric Tentacles and Porcupine Tree, they are credited with breathing new life into progressive rock, leading the way to the genre’s future growth. The California-based instrumental group has often been called America’s greatest undiscovered band.

To my ears this most inventive of bands has always been a psychedelic instrumental sounding board and their musical ideas have always expanded and evolved to give the listener a real Smörgåsbord of acoustic delights. When Gayle asked me if I would be interested in reviewing ‘Sonic Celluloid’ it was a definite no-brainer! Sonic Celluloid includes all four founding members of Djam Karet: Chuck Oken jr, Henry Osborne, Mike Henderson, and Gayle Ellett, as well as Aaron Kenyon and Mike Murray. All six play (to varying degrees) on the new album. Everyone contributed as much or as little as they wanted to, with the huge bulk of the work being done mostly by Ellett and Oken.

This new release is as cinematic as they come, little musical-movies running in your mind as you listen to the tracks, opener Saul Says So has a really electronic, 70’s sci-fi feel running throughout. Quite dark and moody in style at the start, it has you on the edge of your seat before it opens up into something akin to a psychedelic revelation, only one that is experienced in a supremely leisurely fashion. It seems to float across your synapses, leaving a gentle memory everywhere where the intricate guitar playing touches your mind. Forced Perspective takes that soundscape and leads it on a convoluted, meandering journey with a Southern California vibe, edgy drums, funky bass and super smooth electronica transport you to vast landscapes of sound in your mind. There’s more of that psychedelia that I come to expect from this exceedingly expressive band, I just close my eyes and let the music wash over me. It brings to mind independent art movie soundtracks, cerebral music for the connoisseur.

The muted classical music inspired intro to Long Shot makes the hair stand up on the back of my neck. Subdued minimalistic synths bring to mind Jean-Michel Jarre and even a touch of early Kraftwerk to the 70’s nostalgia reunion that is going on in my mind. I begin to think of films like ‘Invasion of the Body Snatchers’ as the track evolves into a kind of Prog inspired sci-fi melodrama. It really is an intricate sepia-tinged cinematic delight. No Narration Needed starts with a full-on free form jazz trumpet before the music takes on a more suspenseful tone layered with atmospheric keyboards and electronica. There’s a timeless aura to this track, like a primordial beast that has lived across epochs and never notices the short lived lives of the pitiful humans who inhabit its planet. A medieval sounding guitar and flute then punctuate the stillness to add a layer of calm and collection. This is a track that engenders meditation and reflection and has dignity and character at its core. There are some great titles to the tracks on this release, Numerous Mechanical Circles being one of them and it is a musical composition that seems to grow around you, the flute sounds and electronic synthesisers forming a symbiosis with an almost alien quality to it. It moves across your mind in a slow but sure manner, all the time in the world to achieve its purpose. I can sense a slight apprehension in the occasionally caustic keyboards and the hesitant voice you hear in the background has a spooky, mystical ambience to it, it is disturbing but in a very enjoyable way. The sounds of waves and seabirds opens Oceanside Exterior, a rhythmic and meditative piece of music that flows through space and time and engenders images in your mind of powerful oceans braking on immovable rocks, time and space standing still against the majesty of nature. This is music as an elemental force but one that has no need to be brash and in your face. The incredibly laid back guitar playing is utterly addictive and is best experienced through a pair of high-end headphones with a great quality glass of wine in your hand. 70’s synths come back strongly on Au Revoir Au Reve, a strong sentimental note can be felt all over this wistful track. Dreamy and fanciful with a Gallic undertone, you could be walking the streets of 1950’s Paris, a suavely dressed detective in the seedy underbelly of this great city. The plaintive guitar is full of angst, perhaps railing against an unsolved crime, who knows but you feel the pain. A masterful piece of music that, once again, has your furtive mind working overtime.

Pink Floyd guitar notes are very evident at the opening of Flashback, a more hard-edged track that has an incredible depth to it, like it has survived eons in the primordial soup of creation. It seems to be treading water, awaiting what, we don’t know. There is a timeless grandeur and stature to every note, especially when the powerfully cultured guitar breaks out. The synths are the stage on which Gayle’s fiery, blues infused guitar takes centre stage. Lower has a post-rock gravity to it, the elegant keyboards glide around you as the mournful guitar tells its seemingly grief stricken tale. A soulfully forlorn piece of music that propagates a sombreness deep in your heart and soul and moves you inside. Another excellently titled track closes out the album, The Denouement Device is music that stimulates a sonic journey for your body and soul, music that will have differing effects on different people. Intense and thought provoking, a wide-ranging and all-encompassing sound that fills your entire being with a feeling of wonderment and lets you see things with a childlike innocence. Genuine, contemplative and thoughtful yet it treats you with kid gloves as it strips you of any pre-conceived ideas and back to your bare soul. ‘Sonic Celluloid’ is yet another triumph for this ever inventive band. An intricate instrumental tour-de-force that takes the listener on a cinematic journey through ever-evolving soundscapes engendered in their own mind. Djam Karet are the masters of cerebral, intelligent music for the erudite listener and have delivered a superlative musical odyssey once again.