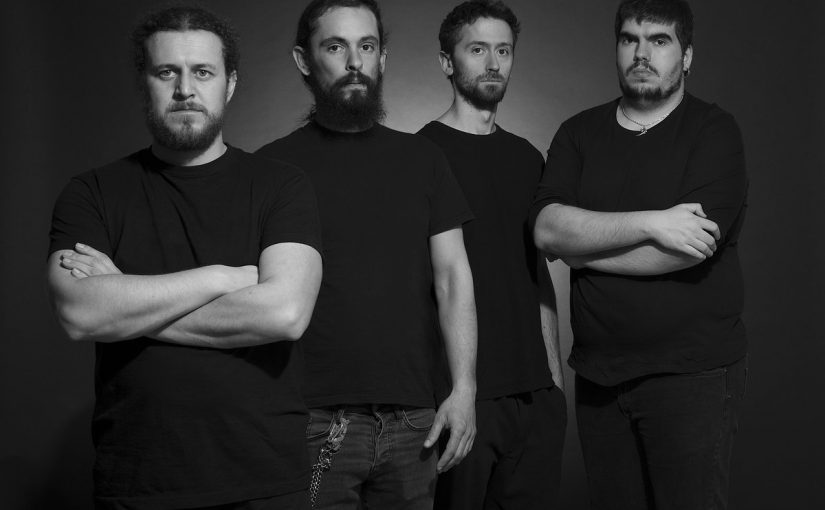 I am an eclectic soul musically, maybe even a hoarder of music. I still have the original copy of the album of Disney’s Jungle Book on vinyl and my Thunderbirds maxi singles from the 60s. The result being I have physical collection of a true reflection of the development of my musical taste and how it has evolved since I was knee high to a phonograph. My boss Martin at Progradar seems to love sending me curve balls from the extreme ends of the musical spectrum that fits the loose term progressive. (It’s true, I do – Ed.)

Firmam3nt, hailing from “Mordor” (aka Villalba, Madrid) are one such band and their debut album from 2016 landed in my inbox last week. They are a four piece instrumental band consisting of Jorge Santana (Drums & Percussion), Alberto Garcia (Guitars), Txus Rosa – Guitars and Sergio González (Bass).

I honestly think the description from the top of the bandcamp site does them an actual disservice. The image musically is one of constant thrash and hammer & tongs metal when, in reality, that tells maybe 50% of the story. I will explain as I go along but this album is not constant chord of doom and despair but is, in fact, far more nuanced and subtle.

This is a four track album with the primary points of the compass as titles.  Representative of the varied influences of the band or the mixed direction of travel they represent.

North opens with a riff of Sabbath proportions, the very essence of ‘the end of the world apocalypse’ travelling into a riffola of rich variety playing in the very metal pond then, inside three minutes, turns into a semi-classical themed electric guitar mellowness which cuts in unexpectedly, pleasantly surprisingly too, before the riffology cuts back in again, not letting you get too comfortable. This is pure guitar driven interplay and these guys are tight as a “gnats Chuff” (to paraphrase a friend). They sound like they know each other well musically and trust each other to follow where things may lead and land in a good place. In a few seconds under 14 minutes they travel a very long way and end this track in a double bass drum rolling thunderous attack that is not for the faint hearted.

The other tracks all fit this pattern, reflecting well crafted instrumental pieces with fine soloing from the guitarists Alberto and Txus. Textured layers with lots of time changes and unexpected lulls in the pace keep the ears interested enough to revisit the album.

The last track South reflects the slow and softer side of the band a lot more. Call it the Southern winds, light and warm, then building up into a storm of intensity closing with a piano that fades to a close.

I played it through about 10 times before considering how to address the review and found enough for me not to want to rush this out and do the band a real disservice.

Who is the audience for this album for then? It’s not for those with a pastoral bent or with a rigid idea of progressive music. If you like The Fierce and the Dead, the darker Porcupine Tree, older Opeth, and bits of Mastodon too then you will get something from this album. Like all instrumental music, if you are looking for songs or easy themes you are not going to find them. It is pure emotional response that gives the interpretation. It is also very hard to wax lyrical over insight and meaning for the same reason.