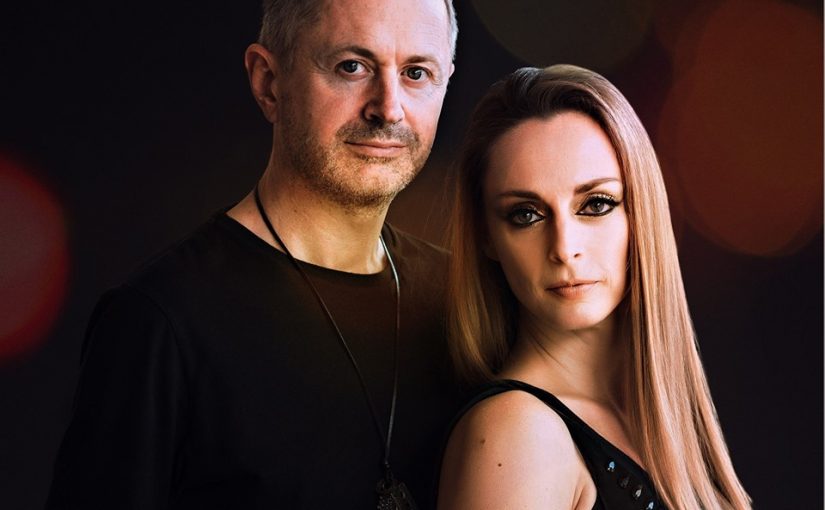 Farrah and Richard met on the outskirts of London, crossing paths for the first time in the mid 1990’s. Many years later they assembled a stellar cast of luminaries comprising Dutch guitarist Ruud Jolie (Within Temptation), American drummer Mark Zonder (Fates Warning) and fellow Brit Jerry Meehan (Robbie Williams) to guest on their debut album in 2011. Simply entitled ‘League of Lights‘, the album fused elements of pop, rock and metal into their own unique blend.

“We come from very different musical backgrounds,” says Richard, “and League of Lights is all about where we meet in the middle. It couldn’t exist without both of us”.

The following year the duo teamed up with Glynn Morgan (Threshold) to record the single “Forever”. The three also performed together on stage for a unique concert backed by a 40-voice choir.

Now in 2019 Farrah and Richard are back with a new album ‘In the in Between’ that showcases Farrah’s sublime and enchanting vocals across 14 new original songs with a sound that makes room for electronic rock, synth pop, piano, cinematic soundscapes and everything in between.

“It’s been a long journey to get here,” says Farrah. “From the day we recorded our first song together we’ve been working towards creating something that combines the heart of who we are. We’re really proud to have reached this point on our journey “.

“It took us a little while, but I’m so proud to share our new League of Lights music with you.”, Richard goes on to say, “It’s just me and Farrah doing everything this time – in the past we’ve collaborated with such talented musicians and good friends, but this time we wanted to make something that was 100% ourselves. So we hope you love it as much as we do!”

Most of you will know Richard from being a co-founder of the legendary prog-metal group Threshold but he also released an album with Dec Burke and Simon Andersson in 2015 under the name AudioPlastik and, to these ears, League of Lights is definitely more comparable with the latter.

To be honest this album is chock full of catchy hooks, brilliant vocals from Farrah and Richard’s distinctive keyboard sounds. I have had it on repeat ever since I was sent the promo and it is rapidly becoming a favourite which, knowing what music usually floats my boat, has come as a little bit of a surprise.

Songs like Due Diligence and Spectrometer could easily grace the mainstream dance charts with their infectious rhythms and driving beats and the icing on the cake is Farrah’s honeyed, mellifluous vocals that harks back to the great synth-pop anthems of the 90’s.

Opener Shockwave has a more direct and harder edge and you can hear the rockier side of Richard’s keyboard playing, surely a track that will become a live favourite with the soaring chorus and sing-along verse.

The whole album is just one incredibly addictive hit of excellent songwriting and serious musical talent that continues to deliver track after track. The ethereal beauty of Scarlet Thread, the 80’s electronic grooves of Down Down and the ambient EDM vibe of Strong Enough, the quality just never dips.

The best is kept until last which, for a record of this sheer quality, is quite a thing to say. Hammer is an intense, powerful song where Farrah’s voice captivates and enthralls and Kings and Queens is, for me, the highlight of a stand out album. It hypnotises and mesmerises throughout its intriguing three and a half minute running time. The measured delivery of the stylish vocals and the brilliant guitar motif give the song some real gravity and depth, one of the best I’ve heard this year and that’s saying something.

The passion continues with the symphonic/synth prog influxed Roll and List, another elegant and exquisite piece of music and the album closes with Promises and Dreams, another track that would have graced the 90’s with its sublime grace.

What League of Lights have done is written a wonderful homage to the synth-pop highs of the late 80’s and early 90’s and brought it bang up to date for a modern musical world. For me it is chock full of nostalgia and is a wonderful and involving listening experience. Another highlight in a year that is beginning to produce quite a few but don’t take my word for it, go out and buy it and see for yourself!

Order direct from League of lights: