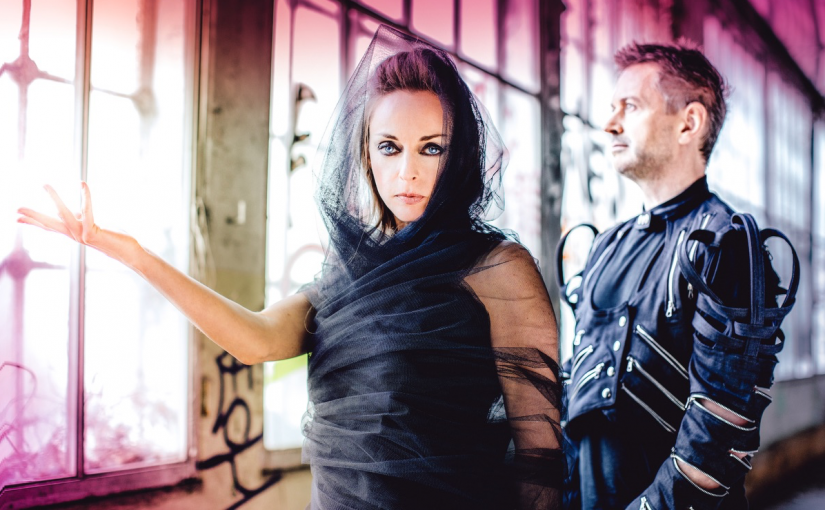 League Of Lights are an electronic prog-pop duo comprised of Farrah and Richard West. Their third and most accomplished album to date, ‘Dreamers Don’t Come Down’ is an outstanding collection of songs that is redolent in places of early ’80s synth pioneers like John Foxx, as well as ’00s exponents of the genre such as Ladytron.

I was a big fan of the previous release, which was my first exposure to the duo, so was expecting big things from the new album and, as it turns out, I wasn’t to be disappointed…

Describing their modus operandi for the album, Richard explains that “we wanted it to be more piano-driven than our previous release and deliberately utilised a smaller pallet of sounds. We had just recorded the song ‘Modern Living’ [issued as a single in January] and that helped to define how our new material would sound – more open than before with less synths and more space for Farrah’s voice to really lift off. It’s as much about the space as it is about the notes.”

The majority of the album was written and recorded during the 2020 spring/summer lockdown, with Farrah stating that “it is about the past, the present and the future; about taking the best from all that you have been through, the pressures of modern life and keeping your dreams alive in dark times.”

It is well known that I was a child of the 80’s and always loved the electronic sound of the new romantic bands and their like. Album opener Modern Living feels like a clever amalgam of Pet Shop Boys channelling their inner early Spandau Ballet (before they went all pop ballad!). What is evident from the start is how much Farrah’s incredible voice adds to the songs and gives League Of Lights something different and unique, a powerful start to the album.

Twenty Twenty One is just beautiful, Farrah’s sublime, ethereal like vocal blends sympathetically with Richard’s almost orchestral instrumentation arrangement. A calm and reflective piece of music that is jewel like in its composition and arrangement, I love it! This gem is followed by the up-tempo delights of Ghosts, I was never a club goer in the 80’s or 90’s (in fact never, full stop!) but the brilliant chorus on this track could have come straight from the dance floor of an iconic bar in Ibiza, it’s a nigh on perfect dance track.

I Still Remember with its wistful, nostalgic feel of hazy, lazy days is another heavenly song with Farrah’s plaintive, dreamlike vocal overlaying the exquisite musical backing. A fast paced, driving, energetic piece of music, Persephone has an urgent feel to the vocals and backing music, a proper nod to classic 80’s electronic pop music that leaves a knowing smile on my face.

Dreamers brings things back down to earth with its measured tempo and mesmerising vocals, an introspective and contemplative song that brings your heart rate right down and leaves in a thoughtful frame of mind. Another brilliant piece of pop music writing, With You has that thing which is a rarity in chart music nowadays, a truly catchy chorus that has you singing along with the upbeat tempo and shimmering melody.

Lines In The Sand is a pared back, reflective song with a cultured and measured feel to the music and mesmeric vocals that are quite hypnotic in effect. The first time I heard the track, I stopped what I was doing and just let its soothing tones wash over me. The Collector sees us getting glammed up, glad rags on and heading off to the club again (metaphorically, obviously in my case!). Another fine, up-tempo track with a killer chorus that this duo just seem to be able to create at will.

Among an album full of brilliant 80’s electro-pop inspired tracks, it’s hard to pick a favourite but, for me, it has to be the moving, melancholy and utterly spellbinding North of The Sun, which, if you are as big a fan of the 80’s as I am, is just over four minutes of near musical perfection. Taking the music widescreen and increasingly dynamic, it’s just a superb song that leads into the album’s final track Echoes of a Dream which is exactly that, a dreamy recap of the last thirty seven minutes. Light of touch and mood, it closes proceedings just about perfectly.

Not only a nod to the past but also a completely relevant piece of music in these present times, ‘Dreamers Don’t Come Down’ is a perfectly crafted collection of pop and electronica infused songs that really hit home. Key to the album is Farrah’s sublime vocal which, added to Richard’s brilliant musicianship, has created something quite wonderful and mesmeric. It is most definitely League of Lights most accomplished release yet and one that is lighting up 2021 for this reviewer at least.

Order direct from the artist here: