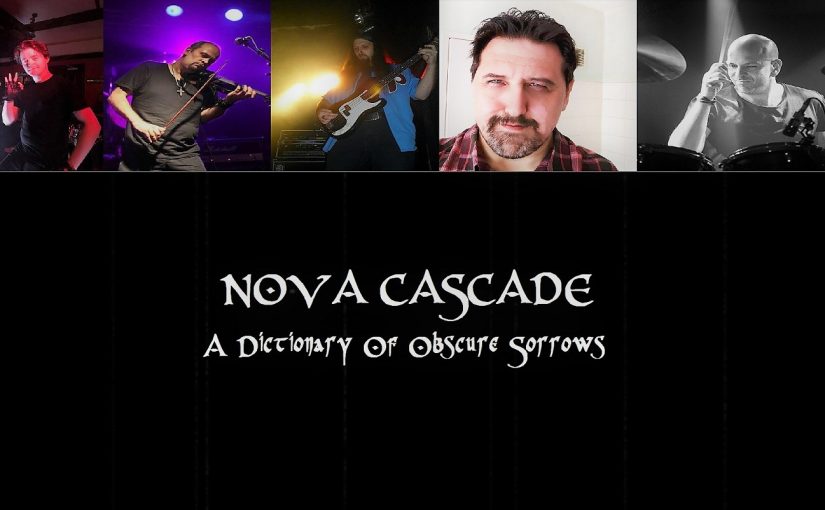 What exactly  is ‘A Dictionary of Obscure Sorrows’?

According to Wikipedia (and who could doubt that source of information!) ‘A Dictionary of Obscure Sorrows’  is a website created by John Koenig that defines neologisms (that’s new words and phrases to you and me) which are designed to define emotions for which we do not yet have a descriptive term. When you hear this new album by Nova Cascade you can sense why they might decide to use that phrase to name their album. Previously describing themselves as ‘Ambient Progressive Rock’, on their promising but minimalist debut album Above All Else, Nova Cascade have developed that blueprint further with more defined pieces. but there is still an overriding sense of  fragility and dreamlike visions which are hard to define.

Nova Cascade have now moved on from their peculiar origins in an online gaming chatroom out of which artists shared musical ideas, and now present a more fully formed and mature album. The sparse, organic feel which characterised ‘Above All Else’ now gives way to a more lush and layered approach but at heart they retain their more ambient and impressionistic style, with some echoes of later Talk Talk. The gorgeous cover artwork by Charlie Bramald places us in a warm, shimmering and comfortable candle-lit library, and the music conveys a sense we are sat in the glow of candle light as we hear these lush sounds which contain contrasting stories of light and darkness.

Dave Hilborne appears to lead this project with his distinctive light, breathy vocalisation and subtle synth laden soundscapes, such as the opening instrumental Unwavering. There is also a slightly harder edge on some songs, such as the bitter Rabbit Hole (with echoes of later Peter Gabriel) which features quite a percussive programmed edge and pointed lines about deceit:

‘This illusion you expertly weave,

Let’s take a trip to the far side,

Descend in a rabbit hole of deceit.’

However, even such perspectives are coated in fairly lush production with no sharp edges. Echo and Narcissus flows languidly in on a bed of keyboards and softly programmed percussion. Hilborne’s delicate vocals reflect the disappearing fragility of the legendary Echo as she wasted away until only her voice remained. Once again rather tortured lyrics are conveyed in swathes of restrained, rather gentle instrumentation, particularly the evocative violin of Eric Bouillette. Such agony rarely sounded so delicate:

And, oh, that stench in the air is your hate

Nova Cascade seem to like touching on sinister or negative subjects in rather pastoral ways, such as the instrumental Apophis, which may refer to an Egyptian Pharaoh or  an ancient Egyptian ‘chaotic being’ until you read the sleeves and note one small line: ‘All Eyes to the Sky in 2029…’ a quick internet search reveals that Apophis is a sizeable ‘near Earth’ Asteroid that in 2004 was thought to have a distinct possibility of striking Earth catastrophically in 2029. Readers will be pleased to hear that after re-calculations this possibility has now been deemed Zero! Nevertheless, it gives Nova Cascade the excuse to compose a suitably spacey soundscape, enhanced by Charlie Bramald’s stellar flute, which is then transformed with some more ominous synth throbs before floating off in to space again.

In contrast the nostalgic Plasticine and Paint touchingly conjures up idyllic visions  and memories of childhood with Bramald’s subtle flute underlining the sense of pastoral reminiscence in a rather beautiful piece. In their previous album ‘Above All Else’ there was a sense of it being a rather ‘home made’ or even a ‘demo’ type album, which it’s organic and intuitive approach to capturing sound enhanced. Nova Cascade seem to have moved on from that rather lo-fi or sparse feel but have not lost that essence of fragility and dream like quality.

The centrepiece to the whole album is the decidedly more ambitious extended instrumental ‘A Dictionary of Obscure Sorrows’ which features the Blue Man Group drummer David Anania (indeed the album sound overall would have benefited from more use of a live drummer than programmed percussion.) It is interesting that in the sleeve notes in relation to this song Dave Hilborne has quoted a few ‘neologisms’ for hard to describe feelings, presumably from the aforementioned Dictionary of Obscure Sorrows, including:

‘Kenopsia’ – The eerie, forlorn atmosphere of a place that’s usually bustling with people but is now abandoned and quiet

Not only are those great new words I will try to use in the right context in future, but somehow the music in this imaginative and evocative piece of work conveys those intangible and almost impossible to define feelings. Hilborne paints the main canvas on keyboards alongside the ever present deft bassist Dave Fick, especially in the second half when Anania’s drums have more impact. Eric Bouillette chimes in with a subtle Steve Rothery like guitar solo in the closing stages in the most ‘progressive’ track on the album.

‘Before you play two notes, learn how to play one note, y’know? And don’t play one note unless you’ve got a reason to play it’.

Such a quote tells us where Nova Cascade are coming from, and conveys their philosophy in where they want to go. This album is certainly no ‘Spirit of Eden’ by Talk Talk (and to be fair what else is? – it’s an all time classic!) but you can tell that would have been an influence, especially in the vocals. Guitars, piano, bass and guitars weave together melodically. There are times when it is beguiling and beautiful – there are other times for this listener when I just want something a little more of substance to hold on to as you drift in an ocean of ethereal , vague subtlety.  Nevertheless, ‘A Dictionary of Obscure Sorrows’  is certainly a very significant step up from ‘Above All Else’ . This album would appeal to lovers of delicate, ambient soundscapes and softly pastoral sounds and images, and I have a sense that the ethereal and talented Nova Cascade will show even more development of their distinctive sound and style in the future…

… now I just need to find a word that can convey that hard to define that feeling?