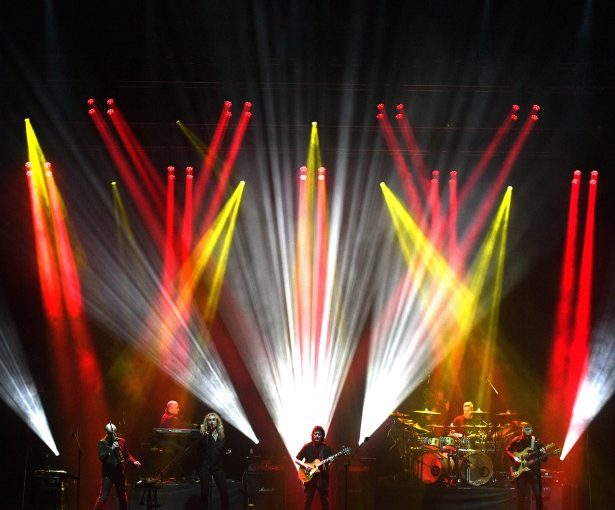 This 2 CD / Blu Ray package is the latest release from the former Genesis guitarist who has, for the last 8 years, been repackaging and marketing his own version of his Genesis era history. Quite rightly so, when the rest of the original band are all doing decidedly different music these days.

This nostalgic revue is both commercially and musically viable and valid, people love these songs and Steve has both compiled a top notch supporting band and also tweaked the songs enough to bring their subtle tones and deep emotions to life. Steve’s tours invariably sell out and he has kept ticket prices to an affordable level thus making his shows accessible to many fans who may never have seen the original band. This latest release sees a return to Hammersmith after last year’s successful run of  shows under the ‘Selling England By The Pound‘ and ‘Spectral Mornings‘ banner.

What’s different this time is that Steve has a new drummer who has replaced the departing long term member Gary O’Toole. He had occupied the drum stool for nearly 20 years and, whilst this hasn’t changed the sound, it has brought a fresh power to proceedings. Craig Blundell is the new man behind the kit and he certainly makes his presence felt on this album, adding new flourishes and also forming a solid, reliable rhythm section with bassist Jonas Reingold and, in doing so, creating a platform for Steve’s guitar to soar freely.

The show is divided into two separate parts, part one being a mix of ‘Spectral Mornings’ tracks and including three tracks from Steve’s latest album, ‘At The Edge Of Light’, these being Under The Eye Of The Sun, Fallen Walls and Pedestals, and Beasts in Our Time. These add to the dynamics of the first half well, ‘Spectral Mornings’ being considered by many to be a crowning glory in Steve’s musical legacy or canon of recordings.

It’s an album that is certainly warmly received here at Hammersmith, the songs will be familiar to most so I don’t really need to comment on them to much except to state that all receive sterling performances here with contributions from both John Hackett on flute and Amanda Lehmann on guitar and vocals.

This section of the show is bookended with two of the tracks from ‘Selling England By the Pound’, namely, Dancing with The Moonlit Knight and an extended take on I Know What I Like, both of which are superb renditions, the latter giving Steve a chance to stretch out on the guitar.

The second part contains the remainder of SEBTP including an unreleased track, Déjà Vu, that was co-written by Peter Gabriel. Steve consulted with Peter who then gave his consent to a reworked, finished version and split the writing credits with Steve. As the track was omitted from the original album, its appearance here is most welcome indeed, it is a feisty and strong number that fits in well with the remaining tracks on SEBTP.

Also of note is the simply magnificent version of Firth of Fifth, a song that is as much about Steve as any other Genesis song. This is probably the best of the many live versions of this song that exist, somehow surpassing all the other versions including the orchestral version from last year’s Festival Hall recording, whilst that was great, somehow this is even better. I think that Craig Blundell’s drumming throughout gives the piece hitherto uncovered power, kick and bite and that elevates it above all the other takes released previously.

You could argue that every year brings a new release of old material and do we really need this one? My answer to that is a definitive Yes! These performances are from the heart and certainly satisfy demand and, whilst the original band are reluctant to perform these, Steve’s troop can certainly do so more than adequately and with conviction, power, dignity and grace. This set does that on every count, the blu-ray is a lovely addition and supplements the recordings with a crisp sound and sharp picture. The lighting used throughput the show is stunning and lighting operator Chris Curran certainly adds emphasis and dynamics in bringing his flair in making this a great visual show. This is made all the better with the sharpness that the blu-ray version delivers and the option of the 5.1 surround version that has been sympathetically mixed by Steven Wilson.

If you have enjoyed any of Steve’s previous live sets, then I certainly recommend this one to you there is so much to enjoy and relive here.