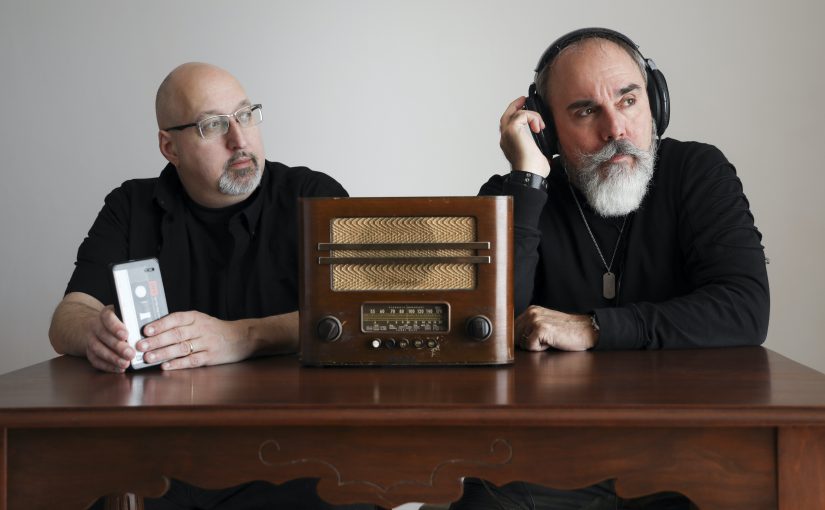 “The present changes the past. Looking back you do not find what you left behind.” – Kiran Desai.

‘A Matter Of Time – Volume 1’ sees Glass Hammer founders Steve Babb and Fred Schendel reimagining the past as they pick their favourite songs from the band’s nineties catalog; reimagining and re-recording those songs from the ground up, totally updating them for the here and now.

If you’re a long time fan of this most ‘Prog’ of US progressive rock bands or a newcomer to their involving and dynamic music then you are in for an absolute treat.

I first got into Glass Hammer with 2010’s ‘If’ but the band is the epitome of prog rock longevity having released their first studio album, ‘Journey of the Dunadan’, in 1993. Suffice to say that Steve and Fred have an embarrassment of riches to choose from when it comes to their extensive back catalogue.

All of the tracks (barring Domain Walls) are taken from the band’s first three studio releases, the aforementioned ‘Journey of the Dunadan’, ‘Perelandra’ and ‘On to Evermore’, and deliver statuesque soundscapes across which the precise guitars, keyboards and vocals can weave their intricate stories of heroic deeds and the triumph of good over evil.

Opener Lliusion (‘Perelandra’) is a case in point, a fine piece of music, intense in flavour and rich in musicality, that immediately draws the listener into the tale that is laid before them. With the soaring vocals, stylish bass, majestic keyboards and charismatic guitars, I’m hooked after the first track!

Shadows Of The Past, Something’s Coming and Song Of The Dunadan form a three song suite that open ‘Journey of the Dunadan’, a concept album based on the story of Aragorn from Tolkien’s ‘Lord of the Rings’. The first track of the trio is literally a music score, containing all the pomp, circumstance and majesty that anyone could really need. This blends seamlessly into the sprightly second piece that has a hint of early Yes to it. Flourishing keyboards, urgent vocals and a powerful, insistent rhythm section drive the track along at breakneck speed before it ebbs and flows like a mystical river. We are truly in the realm of traditional 70’s progressive rock here but Steve and Fred have given it a gleaming new coat and it is wondrous to behold. The closing part of the triumvirate opens with an engaging piano line before becoming something altogether more regal and imposing, once again the rhythm section of Aaron’s drums and Steve’s bass give a solid canvas onto which the captivating tale can be painted in the listener’s mind. The highlight of the whole section has to be the brilliant interplay between Fred and Steve as they weave bass and keyboard lines ever more intricately into the track before Reese’s guitar gets to join the party, inspired!

‘The Return of the King’ (‘Journey of the Dunadan’) is yet another superb track that opens full of instrumental wonder and just holds your attention as it takes you on an enthralling musical journey through the world of Middle Earth. As instrumentals go it is up there with some of the very best and special note must be given to Fred Schendel whose keyboards skills are certainly well on show throughout all of its near seven minute running time.

Domain Walls, taken from 1997’s ‘Live And Revived’ has an utterly carefree feel to it, like the band were just jamming, which, in essence, they were! Another instrumental but, this time, a hard edge, down and dirty, funky as hell one that really gets under your skin and I absolutely love it! Felix the Cat (‘Perelandra’) brings this instrumental section to a close and lives up to its name, graceful and mischievous just like any cat I know. It bounds and leaps along with Fred’s keys again at the core, artfully aided and abetted by Steve’s cool sounding bass.

The next three tracks take us ‘On to Evermore’, the band’s third studio release. The Mayor Of Longview is instantly recognisable as a Glass Hammer track and flows serenely, letting the music flow naturally, with Walter Moore’s dulcet vocal delivering a perfectly crafted storyline. Wistful and contemplative at times yet with an impishness just under the surface that always threatens to break out. On To Evermore is a song imbued with a graceful, stately grace, almost taking you back to an era of Knights, swords and sorcery. It holds itself with composure and class with Walter’s vocals again being key to the feel of the song. Junkyard Angel is a calm and collected gem of a song. The plaintive and thoughtful vocals are a perfect fit with the dreamy, ethereal music and the juxtaposition of Fred’s strident keyboard solo is a stroke of genius, a brilliant track.

The album closes with the yearning and reflective Heaven (the track that also closes out ‘Perelandra’). I love the feeling of understated strength that pervades the whole track, a slow burning intensity that is always there waiting to pour out and pour out it does when Dave Bainbridge’s guitar is allowed free rein. What a way to bring this excellent collection of songs to an end.

With A Matter Of Time – Volume 1′ Steve and Fred have given us a fantastic reimagining of some already sublime early Glass Hammer tracks. This release is full of superb songwriting and accomplished musicianship that has been artfully updated to fit perfectly into a modern world.