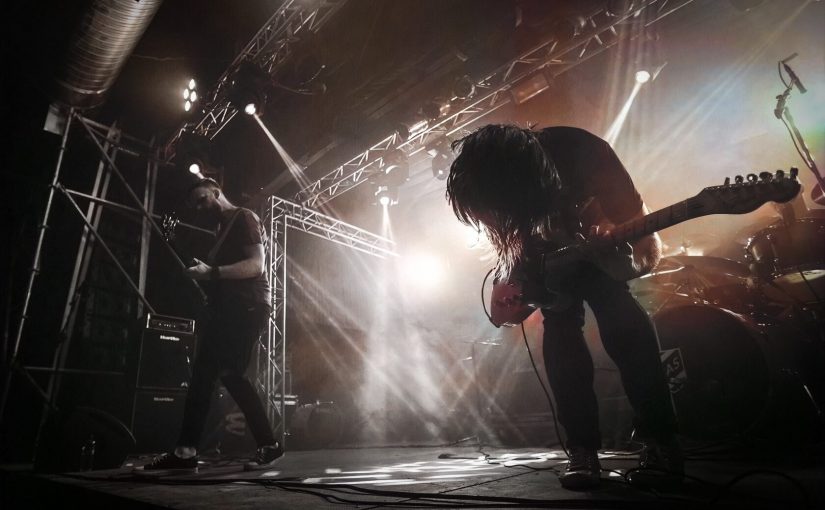 Echoes and Signals are a progressive rock band from Tula, Russia, originally started by Fedor Kivokurtsev and Alexey Zaytsev as an instrumental project drawing inspiration from progressive rock and post/math rock genres.

After two conceptual EPs, they released their first full length album, ‘V’, in 2014. Fedor and Alexey followed this up with ‘Monodrama’ in 2017 and April 2021 will see the release of their third album, and the first to feature vocals on each track, ‘Mercurial’. Leo Margarit (Pain of Salvation) features on the album as the guest drummer.

‘Mercurial’ is a journey. A journey through the dark and chaotic space where everything is unstable like mercury by itself.

There’s a metaphorical version of the album’s narrative but Fedor shared this more ‘grounded’ version with me,

“So the story behind this album is based on my personal experience of going through psychotherapy or if to be exact, Jungian analysis. In general it’s based on the dark period of my life that started at the beginning of my 30s. It could be called a mid-age crisis from some angles, but it was followed by a lot of different and often unpredictable dreams , filled with rich symbols, and this path led me to discovering connections between those mythological symbols, alchemy and my own symptoms. So I started writing this music two years ago, just following the inner compass and those dreams, later the psychotherapy started and it helped a lot in different ways.

There’s an archetypical scenario called ‘the dark sea journey’ or ‘nigredo’ in alchemical terms, the good example is Jonah story from the Bible, meaning that this kind of journey should occur anyway and it serves some purpose.”

I’ve been a long time fan of Echoes and Signals since the early days and have watched their progress with a lot of interest, seeing them improve and mature over the years and each successive release and, I know it’s not the norm to come to the conclusion first but, with ‘Mercurial’, I really feel they have hit their creative zenith.

A fine collection of seven dark and often brutal tracks but songs that have a stark beauty at their core. The addition of Fedor’s cultured vocals really adds class and ambience to the already mighty impressive music. Mixing the pensive, sombre, thoughtful progressive rock of bands like early Porcupine Tree and Riverside with the hard rock sensibilities of bands like Queensrÿche and Caligula’s Horse and then throwing in something that sounds a bit like a more serious version of Foo Fighters, the album ebbs and flows deliciously.

Leo Margarit’s fine drums are an excellent foil for Alexey’s sophisticated bass and lay the perfect foundation for Fedor’s dynamic guitar playing, able to switch from aggressive to calm and collected in the blink of an eye.

The sophisticated brutality of tracks like the opening trio of Darkness, Tower and Broken Machine is an amazing assault on the senses and leaves the listener open mouthed with incredulity, simply blown asunder by the sheer power and vitality of the music. These songs seem to have a life and vivacity of their own, monolithic and primeval at their core.

The haunting, melancholic grace of Lost In Transition is rooted in the amazing vocals, halting and heartfelt, backed by the urgent but delicate instrumentation, before a majestic force takes over, imbuing the track with more than a hint of menace. In my opinion, this is one of the best songs that Echoes and Signals have ever written. Chaos is a shimmering, eerie piece of music that nags at your thoughts and leaves a slightly disturbing sensation in your gut. A wonderfully mysterious and enigmatic track where Alexey’s keyboards create the disturbing mood that segues straight into Mirror, a sparse and halting song that reminds me of ‘Empire’ era Queensrÿche, simple but utterly satisfying in its composition and delivery.

The album closes with the wistful feeling Dust, another thought provoking song that opens softly with Fedor’s melancholic vocal being matched by the deliberate drums, bass and sinuous guitar. The music turns more widescreen and imposing with towering guitars, thunderous drums and a much more anguished vocal before entering into a musical tug-of-war with that initial place of calm reflection.

‘Mercurial’ trades some of the bands signature post-rock sensibilities for a darker journey into the kind of prog-metal embraced by the likes of Tool and this new direction is one that I feel suits them perfectly. The addition of vocals to every track is a brave change and one that elevates them to another level and opens them to a wider audience. Echoes and Signals have returned triumphant and with an album that hits the bullseye in every way!