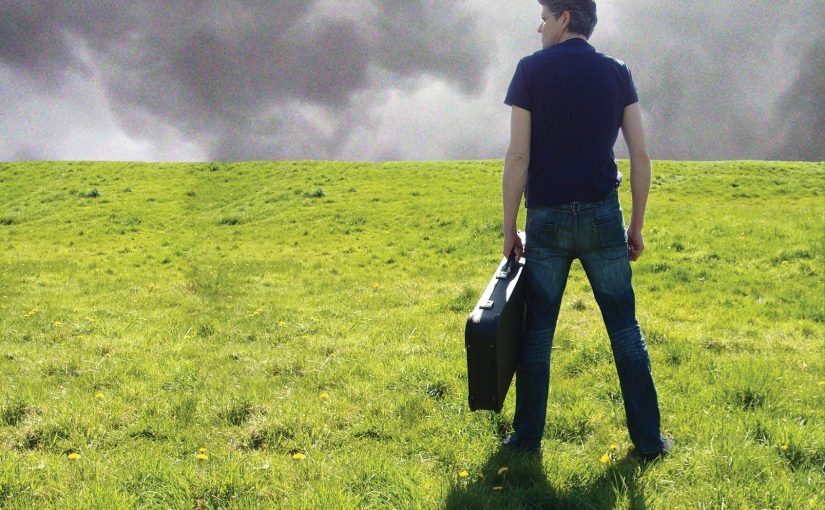 I must confess that until he was signed to Bad Elephant Music, I was not familiar with any of Simon McKechnie’s otherwise extensive back catalogue. This is perhaps a good thing, as one comes to his work without any preconceived ideas or expectations.

This new album ‘Retro’ is his debut for BEM and rather an interesting one it is, the album consisting of four main pieces, three long and the other one an abbreviated piece.

The longest track is The Origin of Species and is a piece inspired by the writings and recollections of one Charles Darwin made during the five years he spent in the southern hemisphere and how those journeys on The Beagle both affected and influenced his Theory of Evolution, encompassing such elements as survival of the fittest and natural selection.

If I were to sum this song up in a couple of words I would say it is expansive and intriguing, there are many facets and sections to the track that make it an impressive listening experience. The song uses the actual words written by Darwin and this gives weight to the lyrics as they espouse findings made by the great man himself. There are also some lively guitar passages in between The Beagle and Natural Selection segments of the song.

The Natural Selection and Struggle for Existence segments are accompanied by some often stark rhythmic elements which nicely offset the words being sung , the song then moving onwards into some keyboards before a strident guitar riff. These sections end with a part called The Struggle which is a drum solo but possibly not as you would expect, as it is in enclosed in keyboards and concludes with some excellent guitar that is wailing almost to the point of feedback. This ushers in what could be considered a more curious segment that is supported and accompanied by woodwind.

This is one album that you will appreciate the lyrics to hand to fully grasp what is going on and what is being sung.

The section called Contemplate features a recurring sound effect leading to the lyrics. These words speak of what Darwin has seen and his thoughts as a result. This leads into the final section of the piece, Laws of Nature, which seeks to draw his conclusions as he speaks of things created that are now being evolved and is backed by a great guitar motif and solo that bring the song to a close accompanied by a gentle piano. This track is certainly different, lyrically impressive and definitely worthy of consideration, a fine opener,

The shorter, title track, Retro opens with some distinctly odd keyboards and an early 1980’s drum program, the lyrics evoking days gone by. The song has a lively beat to its and vintage (i.e.. old!) keyboards and tones and a decidedly retro rock and roll type guitar section and solo, all of which work together to create an almost olde world sound to the piece. Simon has vocal phrasings that are reminiscent of one Freddy Mercury before that beat kicks in again with its strong guitar lines running through it before the song ends with massed voices singing the word Retro, again highly effective. It’s quite an excellent and catchy little number and I really like it.

The third track is another longer Piece, The Enchantress of Number, which is a song about Lord Byron’s daughter, Ada Lovelace. Ada was a mathematician who considered that pure calculation could have other applications beyond mathematics. She had a difficult upbringing, living in Byron’s shadow, beset with illness. At the age of 17 she went to a ball and meets Charles Babbage who introduced her to his ‘Difference Engine’, a trial design for a calculating machine.

So enthralled was she that she threw herself into the task of translating a paper about ‘The Analytical Engine’. In her notes she wrote examples of its use and in doing so introduced the world’s first computer program. All in all she was a remarkable woman and this song tells her tale eloquently and with true style.

The last song is called The Return of The Beagle and is an instrumental piece in which Simon imagines Darwin’s journey back home, going through his notes whilst the wind is blowing through the sails as the boat travels across the sea, homeward bound. This piece works as an excellent closer to what has been an imaginative and illuminating musical journey in the company of Simon and his friends.

This really is a fine album, and the future looks bright for Simon if he can keep delivering intelligent, articulate, and multi-faceted music like this here on ‘Retro’. It is one that will take time to digest, enjoy and ultimately appreciate but, in any manner, it is a very well-presented record with much to recommend to listeners.

Order the album on bandcamp here:

One thought on “Review – Simon McKechnie – Retro – by John Wenlock-Smith”