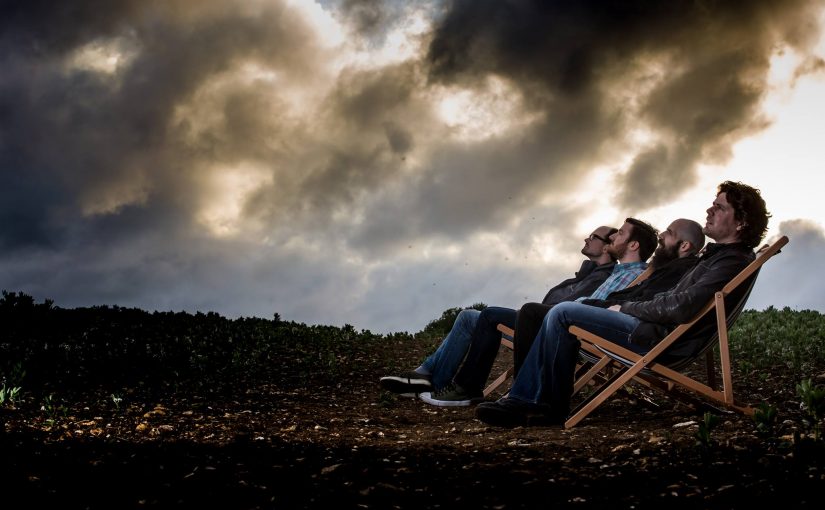 ‘Make Me Young, etc.’ is Thumpermonkey’s  first full length release for a while, the elusive and eclectic quartet announced their musical return last year with the stonking ‘Electricity EP’ (check out the review at the link at the end) and since then they have performed a barnstorming set at this years Eppyfest in Cheltenham (where their unique brand of music went down a storm), mixing their older material and new stuff created a vibrant and room rocking kind of set.

I mention Eppyfest because it was all thanks to Ian Fairholm that I saw them back in 2014 in Stroud, where their inventive and complex musical prowess, their emotive and powerful set and their sheer innate musicianship drew me in. Off I strolled at the end of the day with the two CDs on offer, 2010’s ‘We Bake Our Bread Beneath her Holy Fire’ and 2012’s ‘Sleep Furiously’.

Both albums are as eclectic and eccentric as the band are live and I am fully aware that the kind of sonic origami that Thumpermonkey creates is very much a marmite sound, you either love it and enjoy them or it passes you by. That is fine, not everyone likes the same thing, and I wouldn’t expect you to change your mind only 200 words into this review.

However, as a reviewer who gets quite a lot of stuff sent to me from various places to listen to, I would rather receive one album like this than half a dozen generic middle of the road, let’s make an album that sounds like 1974 Yes or 1976 Genesis because we’re prog and it’s what we do, if I want Yes circa ’74, I will go put ‘Relayer’ on.

This isn’t the sort of record that you can put on in the background. Very much like their live show, Thumpermonkey request you pay attention, and from the get-go, the opening salvo of Veldt, they grab the attention, and pull you right in.

The overriding theme of the album is an impending apocalypse (in this instance based around an asteroid hitting the planet), which, based on the way things are going in the wider world, may not be far off the mark, particularly when we seem to have world leaders who think that Threads was a manifesto and not a warning.

This flows throughout the music here, and the four piece manage to create some truly expansive widescreen sounds, with the beautiful interlude of Buttersun fitting between two wonderfully intense pieces of music, Figstorm and the intense and brooding Deckchair for Your Ghost. The way the Michael Woodman’s vocals soar and glide through the music is a joy to behold, and they are treated as much as an instrument as his powerful guitar work, mix in Rael Jones fluid keyboard and guitar work, add the drumming powerhouse that is Ben Wren (who can flit between the soft and the heavy at the drop of a (hi) hat) and Sam Warren’s bass, that is as much of a lead instrument as Woodman’s guitar, then you have one of the most inventive musical quartets around at the moment, fitting into that area of music that is occupied by bands like Knifeworld or The Fierce and the Dead. Thumpermonkey are very much their own musical genre.

The title track builds and climbs to it’s crescendo, where the mantra ‘Take this useless sadness and throw it away’ acts not just as the climactic coda, but also an instruction, a life hack if you will, something that resonates with you long after the song has faded.

They mix widescreen cinemascope sounds, with big riffs, piano sound to die for, and an overarching concept that never feels forced or shoehorned into.

Very much like the best films and plays, the narrative drives and unfolds across these 7 tracks and it is an album that rewards, nay demands, repeat listening (luckily, I’ve been enjoying it on the commute to work through my headphones, so I am there, immersed in their world and sound).

This year has seen a strong bunch of albums from artists like Regal Worm or The Tangent, who have looked at musical boundaries and decided to ignore all of them, and this is one of those albums.

It sounds like nothing else out there, other than Thumpermonkey, and it’s a sign of how right this album is that now, as us reviewers are starting to think arbitrarily about those pesky ‘best of’ lists that people like so much, that I can say for a fact that Thumpermonkey, with the ‘Make me Young, etc’ have released one of the best albums of 2018, and it was well worth the wait.

Artwork and photography by Ashley Jones.

One thought on “Review – Thumpermonkey – Make Me Young, etc. – by James R. Turner”