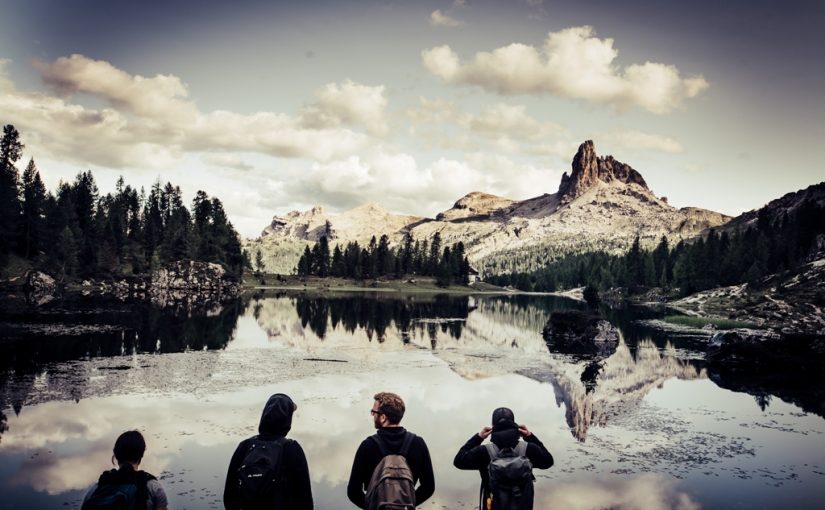 There’s always the clamour to decide what has been album of the year every annum and the good and great are voted for. In conversation the other day it arose that what is voted best, may not always turn out to be the most played.

Some albums push their way into your play-list and you find yourself returning to them regularly to get your fix. Long Distance Calling’s “Trips” is one of those albums for me. I can’t count the number of journeys in the car, where it has been played, you just have to be careful one doesn’t drive too quickly to some of the tracks. It is a real energiser of an album and always picks me up.

I have all their albums and the addition of vocals on “Trips” seemed to give it an added edge. So I was surprised to find the latest Long Distance Calling (LDC) release “Boundless” sees them returning with an all instrumental album and no Petter Carlson on vocals, a brave or foolish move?

The suitably brooding cover and promotional photos accompanying the music would suggest the promise of something a little darker with plenty of atmosphere and strength in their musical belief. A crash of cymbals and the heft of drums from Janosch Rathmer feed into a drone, building with a lashing of feedback from guitar duo Florian Juntmann and Dave Jordan to see them Out There. The growling guitars are suppressed to repetitive gentle chords, Jan Offman’s bass blowing across the brown grass and moss covered moors as LDC bend into the stiff breeze and push forward, the mud of sceptics sucking at their boots. Drums drift back into the mix and the music rises to a crescendo as they reach the foot of the mountain and assess the route.

The heavy climb is echoed in the pumping guitars as LDC begin Ascending the second track of the mountainous album, riffs jabbing at them like the bitter wind, scrabbling for hand and footholds, the escalating guitars puncturing the cloud-base as the band strive for the peak and throbbing percussion pushes upwards as looping chords announce the summit.

They are In The Clouds, disorientated with limited visibility as strange sounds and percussion echo around. Strummed chords bend like sirens’ cries and aggressive guitars pull at the fabric of the tune as LDC seek to gain purchase and not lose their way among the rocks and crevices of the atmospheric synths and loops. The instrumentation fluctuates, with the menace of the bass warning of one lost footfall and the subtle percussion tries to wrong foot across undulating, tuneful ground.

Through plucked strings and behind jangling guitars, a sound is heard Like A River, as this accomplished German quartet confidently navigate their way. At one point the sound morphs into something narrowly close to the theme from a spaghetti western, whilst violin and brass make brief dalliances. Pulled back by the whistling winds, the clouds of music are parted revealing unparalleled views of the cruelly beautiful landscapes around them,. LDC admire the aural view as the guitars float down the mountainside and away. Pushing their way through the heavy waves of riffs that strike them, the band forge their way to The Far Side of the mountain top, drums eddying as bass rolls of thunder meet overhead and the darkening, heavy clouds of guitar speed their way across the sky with determination.

Abruptly finding themselves On The Verge, piano calms the storm as harmonic guitar notes are picked to drift in the air. Looping guitars build and the band members attend to the backpacks they have been carrying and prepare for the descent. The music creates a determined urgency, to take advantage of the break in the weather, as the clouds drift away and pale watery skies are revealed.

Buddy checking they are ready, the band take a few steps back then all instruments rush forward together and leap from the edge………

The cold air moans around them as LDC dive from the precipice, sharpening the senses at the wonder of it all as they feel Weightless, drifting like birds on the thermals of the music as the building bass and drum rhythms quicken the heart. The pace of the descent increases, arms and legs splayed as the music spreads and the guitars fly with complete freedom. A tug of chords, the brief jerk upward as the ‘chutes open safely and they are nearly there.

The ground rushes towards them with all the energy the instruments can muster and percussive blood pumps in the ears. Knees bend as contact is made with terra firma and they roll before standing proud as the music swells their chests and hearts. Rising, the Skydivers acknowledge they have arrived unscathed and begin to draw in the ‘chutes as they congratulate each other in conquering the dramatic mountain of music; they have made it their own.

All gathered in, the band turn and with fading notes in the cooling breeze, LDC head back homeward with tales of their achievement bolstering their distinctive success. So have Long Distance Calling pulled off the challenge of reinvention? For me it’s another resounding yes, to be shouted from the highest mountain and to echo in every valley. Their bravery has been rewarded and so shall yours if you have belief and buy the album.

Bands are criticised for drifting from their comfort zones at times or relying on tried and tested methods, this is no throwback but yet another push forward for Long Distance Calling whilst holding on to their distinctive sound, well done lads, keep up the good work.

Order ‘Boundless’ direct from Inside Out in Europe