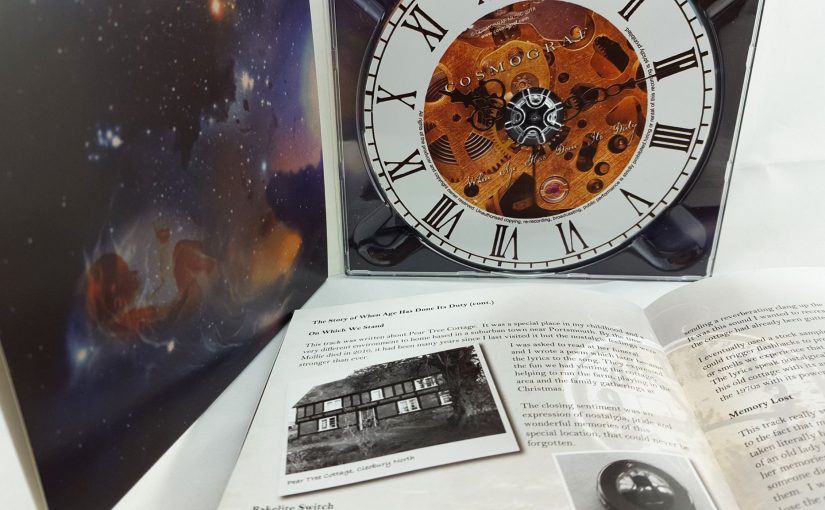 In the sleeve notes for the comprehensive new package that comes with this remix of Cosmograf’s 2011 critically acclaimed release ‘When Age Has Done Its Duty’, Robin Armstrong writes,

“I sometimes think about all the people I once knew that are now gone and I very much struggle to come to terms with their collective struggles, joys and achievements in life coming to an end. It’s an enduring theme in a lot of what I write. I decided some time back that it would be a tragedy to leave a life with no legacy left behind and it’s a driving force for me to leave as much music as I can with the hope that someone will remember…”

Robin is the man behind Cosmograf and is an extraordinary musical storyteller. His involving concepts and often personal historical narratives take you, the listener, directly to the centre of the story and envelop you in a whole gamut of emotions, all invoked by his remarkable songwriting.

Following the brilliant ‘The Hay Man Dreams’, released last year, Robin has taken it upon himself to revisit ‘When Age Has Done Its Duty’ to completely remix and master it and, in his own words,

“…address some of the issues that were less than perfect on the original recording. Many of the original guitar, bass and vocal parts have been re-recorded, new string arrangements added and a more dynamic low volume level master produced…” I’ll confess, I have never heard ‘When Age Has Done Its Duty’ before so I can’t give a ‘before and after’ review but, as a big fan of Cosmograf, I’ll tell you what I think of this release as a whole.

The concept of the album is based around Robin’s personal experiences as a boy, visiting his Auntie Mollie and Uncle Harry at their home, Pear Tree Cottage, in a tiny village called Cleobury North in rural Shropshire and he has expanded the concept to cover the emotions and experiences we feel through the ageing process from birth to death. The stunning, original artwork is done by Graeme Bell.

Into This World is a an eleven minute piece that sets the scene with ‘Birth’ as the theme and is instantly recognisable to any fan as a Cosmograf track. Slow building and slow burning with a fragile piano note and Robin’s distincive vocal, the clever lyrics are used to convey the hopes, fears and aspirations that follow the bringing of a child into the world. A powerful and edgy song where the stylish drums of Bob Dalton are used to very good effect. As always, this excellent musician has you gripped from the first note with a moody and atmospheric song that asks questions and, while there is always a feeling of venturing into the unknown, deep down it is hope and optimism that is at the core. The elegant bass of Steve Dunn joins us for Blacksmith’s Hammer, a tribute to his Uncle Harry who worked the forge, shoeing horses right up to his death, age 73 in 1987. It’s an uplifting piece of music, an ode to a modest life where simple pleasures (like smoking a pipe) were enjoyed to their full. An almost spiritual song, there’s a superb (if short) guitar solo that burns with a humble honesty and the lyrics literally describe his demise; he sat back from shoeing a horse and drew his last breath.

Written about Pear Tree Cottage, a special place in Robin’s childhood, On Which We Stand was originally a poem which he wrote to read at his Aunt’s funeral and has become the lyrics to this beautiful song. A wistful and nostalgic opening courtesy of Simon Rogers’ guitar opens into a sublime vocal where Robin reminisces of all the happy times he had in the cottage, the games and the fond memories of he pastimes that made it such a wonderful place. Sit and listen to the words, let the music wash over you and you can almost imagine being there, a sentimental musical journey down memory lane. An old light switch that Robin remembers triggers flashbacks to previous memories and dramas, this is the essence of Bakelite Switch, sounds or smells we experience that snap you back to a previous event in time. On my first listen to the album, this was one of the songs that immediately stood out, the compelling , almost mysterious opening that erupts into a forceful and dynamic guitar riff catches your ear straight away. Bob’s drums drive the track along and you’re hooked as soon as Robin’s vocal begins, “We had electric light in the 70’s, flick the heavy switch, lights up all our lives.” A very involving song that speaks about the novelty of going back to a house that is very much ‘back in time’ and the emotive guitar solo from Luke Machin combines with some swirling keyboards to add even more drama to the visceral memories that Robin is invoking. Huw Lloyd-Jones adds a poignant vocal to the emotive background of Memory Lost. The song is about an old lady battling on as best as she could after the death of a partner, and living alone with her memories. The title referring to hanging on to the only thing you have left when someone dies…your memory of them. A pared back and sincere track that really hits you hard and makes a mark on your heart and soul, a single tear rolls down my cheek as I listen to the intensity of Huw’s voice, Robin adding a wonderful harmony. I challenge you not to be moved by this seven minutes of Robin trapping history so he would never lose the detail as the years passed, the guitar solo that closes the song is just superb. Documenting Mollie’s last days at the cottage, title track When Age Has Done Its Duty opens with a wonderful recital of ‘Growing Old’ by Tom O’Bedlam spoken over an eloquent piano and keyboards and then Steve Thorne lends his stirring vocals to this bitter-sweet tale. In the 20 years after harry’s death, Mollie always seemed to just be waiting to be with him and in the days leading to her death she just huddled against the Rayburn in the kitchen refusing to eat or move. A sad but elegant song that documents the passing of this proud woman. Robin’s songwriting skills really come to the fore on this track and his choice of Steve Thorne as the vocalist is perfect, the pathos and sentiment he brings to every word is perfect. Just when your emotions are as strung out as you think they can be, Robin fires another stupendous guitar solo at you, leaving you utterly drained.

White Light Awaits takes on the question that has been asked through the ages, what happens after you die? Written as if Robin was having an ethereal conversation with Mollie, asking her what it was like to die and did she experience anything after death. Being a devout Methodist, she would have been appalled by this idea. There’s a bitter, angry tone to the song and the edgy guitar of Lee Abraham adds to the almost cynical, questing tone of Robin’s vocals. Drums are, this time, provided by Dave Ware and their dynamic feel just adds to the challenging aura. The album closes with the heartwarming Dog on the Clee, an inspring song which tells the story of Robin forging a privileged bond with Mollie’s Border Collie ‘Laddie’, a dog that didn’t really like many people at all. The graceful acoustic guitar and Robin’s ethereal vocal bringing a sense of wonder and inspiration to the final chapter in this utterly captivating story.

It may have been originally released in 2011 but this completely remixed and mastered version of ‘When Age Has Done Its Duty’ feels as fresh as if it was recorded yesterday. Possibly the most emotional journey that Cosmograf has ever taken me on, I feel it is Robin at his most open, a wonderfully involving musical journey with a narrative very close to his heart. There’s nothing quite like a Cosmograf album and this could possibly be the best of them all.

When Age Has Done Its Duty CD (2018 Remix Edition) -PREORDER

Oh, and for vinyl fans like me, there will be a vinyl release later in 2018!