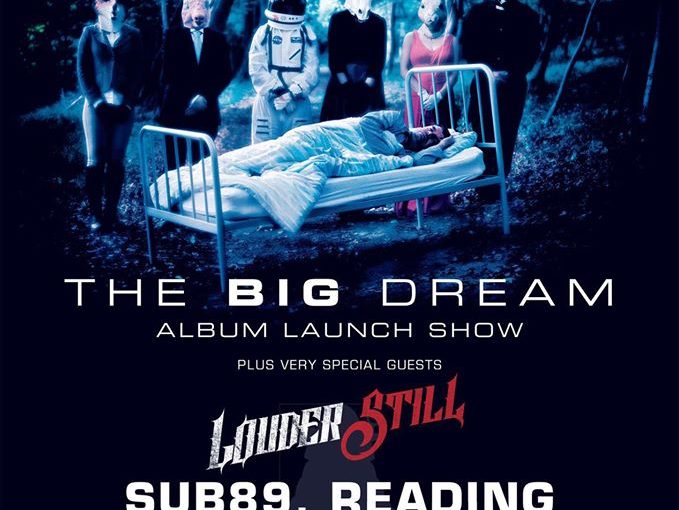 The following was scribbled on my phone as I watched from the vantage of the Merch Desk’s Forward command post (thanks to Brigadier Nellie Pitts). It’s a good crowd of people with hair that time forgot… I’m jealous. My locks decided to leave me years ago, sacrificed to the trinity of job, mortgage and respectability. A plethora of tour t shirts…  Yes, sundry variations on a theme of keep calm and prog /play on.

I can report that Nellie doing a brisk trade in robot paraphernalia
everyone seems to know each other and the atmosphere is good, a smell of anticipation in the air. I’m amazed that my hometown has all these like minded people.

Where do they hide? Why don’t I know anyone?  Is the Lonely Robot me?
Perhaps Mr Mitchell and his crew will enlighten me. It will be an experience, seeing him on stage rather than nodding in passing as we orbit around Reading.

And they’re off, a quartet of songs from the debut album setting their stall out with panache and style. John Mitchell’s on stage banter is honed to a fine precision.

“Craig Blundell on drums – he’s not shit!”, being the first bon mot to raise a groaning cheer…

And the robot appeals to all,  as can be seen from the Reading wildlife grooving to the first new song,  a slow burn with gorgeous guitar and a hypnotic vocal. More banter, “Ian Holmes, on bongos…”, then it’s their theme song, Lonely Robot, with its chiming guitars and thunderous drums… Some fine piano over that hypnotic drone, a robot’s soul exposed as a dark broody labyrinth of noise .

John is on fine form, singing with vigour and passion, then peeling off intricate guitar parts casually,the way only a true expert can. Equal parts Peter Gabriel and Chris Martin, he has a distinctive voice, suited to Prog or Pop.

For those of you unfamiliar with the Robot, they mix rock, prog and pop into a swirling mix that, like a black hole, draws you ever deeper in. There are flashes of Porcupine Tree guitar, those thunderous drums, a solid bass rumbling throughout and keyboards that fill out the few spaces left.

John now introduces his special guest, Kim Seviour to perform a track. Much more pop and upbeat, their voices fit and the music steams on. The hook line, “don’t forget me”, is an instant earworm and the song gets heavier until the middle 8 breaks down to a heartbeat drum pattern with some fine synth layers draped over it.

There is a commonality in Mr M’s work, from The Urbane through Arena and It Bites to The Robot clan, a melodic core, songs that burrow and charm in equal measure, vocal harmony as important as the instrument. “Are we copies” demonstrated that, with the impassioned vocals equal to the guitars. We are then treated to a lighters in the air moment, as the next track floats over us, building the castle of sound, the voice and guitar increasingly emotive and the crowd rapt in attention, following the melody and swaying with the chorus. It was a beautiful moment. And finally, a vocal tour de force, Mr Mitchell and keyboards drifting weightlessly across our event horizon before Mr “Not Shit” thunders and bashes a drum piece, more demolition job than drum solo. He hits as hard as John Bonham and the electronic percussion effects add to the Bonham groove.

We are then warned that we are getting a velociraptor riff, a T- Rex, according to it’s creator  , and the next track does just that, guitars roaring and snarling to a climactic finish.

Now for a short personal interlude, fellow passenger, Jane Armstrong has retreated from the front to recuperate and berates me for looking nothing like my Facebook avatar!  It’s loud but very clear here at the merch desk, the band are in full flight now, and what a band they are, jamming away, first the keyboards taking the lead then John and his cybernetic guitar scything through the mix. We then are treated to another of the new tracks, Sigma, which is all Nirvana approved quiet/ loud /quiet and another earworm chorus, great keyboards and stun guitar, in fact a fitting end to a great set.

So, there it was. The 4th Law of Robotics – “Thou shall Enjoy the sounds emanating from the Robot Clan , even if you know no-one, are run down and in need of a battery charge”.

After that set, my life meter was reading full again and I slipped off into the night, clutching a copy of the new CD that Nellie insisted I purchase as, “It’s alright and they’re OK people …”

Far be it from me to question the wisdom of a Prog Queen, but sat here listening to the CD, you know what? She had erred on the side of caution. It’s a great CD, well worth investing in.

I know, I was that Lonely Robot.

Order ‘The Big Dream’ from Nellie Pitts at The Merch Desk