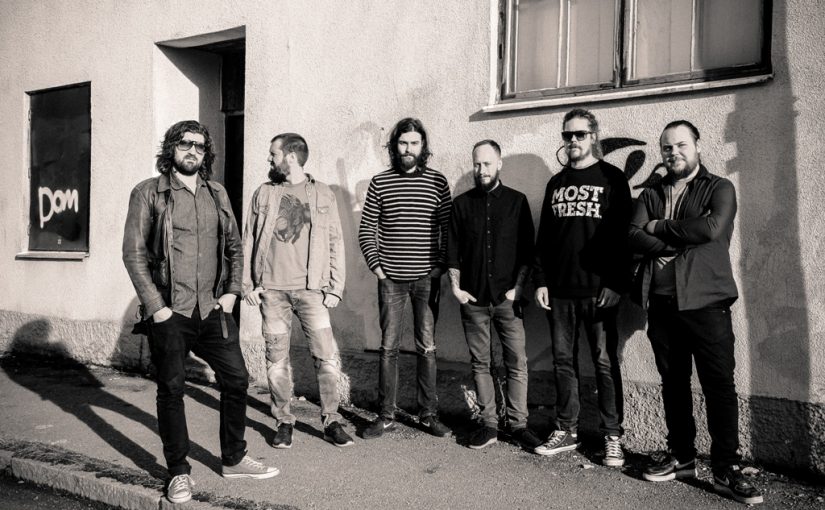 As announced in assembly this morning we have a very special guest in our music lesson today. Martin Hutchinson, down the front please, I am not having you and Leo Trimming messing about at the back of the class.

No David Elliott, it isn’t Denzil Dexter from the Fast Show.

As I was saying, we have a guest who is going to play the music from his soon to be released new album On Her Journey To The Sun, under the band collective name of Gungfly, so please give a big round of applause for Mr Rikard Sjoblom and his fellow musicians:

Those of you familiar with Mr Sjoblom’s previous work with Beardfish, recent forays with Big Big Train and solo output may have some idea what to expect from this accomplished multi-instrumentalist. If not, those admiring the opulent Santana/Mahavishnu type cover of this album may also hope to glean some clues as to what lies between the grooves of the latest from this excellent musician.

So pay attention, we will discuss each track on completion and there will be homework………

Well girls and boys that was the first track, Of The Orb, what do we think?

Yes Leo, I can see you waving frantically and please take off that top hat, we are not holding auditions for Alice in Wonderland. So you think it is reminiscent of some of your Dad’s old 70’s material, with the keyboard sounds, mixed with more contemporary progressive instrumentation. And you like the synthesiser and guitar harmonies David Elliott along with Mr Sjoblom singing the catchy line throughout of “Stay with me, care for me, I will be yours”. It is quite an epic track in length, Martin Hutchinson, and please try not to shuffle so much on your seat. Oh, you’re chair dancing because you think it’s catchy, well don’t get carried away.

Back to the music, this is the second track On Her Journey To The Sun….

You liked that did you Emma Roebuck, thought it was jazzier, had a bit of swing to it but is maybe more of a pop tune. Yes, Petter and Rasmus Diamant are brothers and yes their drums and bass do work well together to create an effective rhythm section. It’s Mr Sjoblom to you young Rob Fisher, not Rik, but yes he does have a high voice sometimes, anyone know what this type of vocal is called. It’s not ‘girly’ Hutchinson, it’s Falsetto. Track 3 is entitled He Held An Axe….

Would you you like to take a moment out from digging a tunnel to your brain via your left nostril David Rickinson and give us the benefit of your opinion. You thought the acoustic beginning to this one was good and the way the same chords segued into the electric guitars which loop throughout parts of this track and then back to the acoustic sound. Yes Mr Sjoblom’s voice does change, he has quite an impassioned vocal range and the lyrics do seem to be about quite a gruesome story, I thought that would get your interest.

It was an exciting, heavier track Tony Honour, I quite agree, but could you please remove your gum, there is no chewing in class. Don’t stick it under the desk put it in the bin thank you. You think the guitar work sounds quite complicated on this one and it is more up tempo. Well the guitars played by Mr Zackrisson and Mr Sjoblom do have some very fine interplay and yes, you could call this one a ‘rocker’ with some powerful drumming. Please note David Elliott you will get a headache if you keep trying to head-bang like that.

Emma Roebuck, you think this has a beautiful piano introduction and a gentler organ melody. Anyone else? Yes it does sound quite sad in a way Leo, maybe a bit wistful and it is quite a contrast to the previous track. It is shorter than the other songs which also enhances the change in pace, with a fading ending, which as you will hear, adds emphasis to the intro of  Track 6, Polymixia….

A ‘funky’ start you say James R Turner. Why are there no vocals you ask? It’s what is known as an ‘instrumental’, with no singing. It is the longest track so far James and yes it has multiple layers on top of each other which reveal themselves subtly and I’m sure you would be able to distinguish many melodies and time changes with further listening. You feel there is a sprinkling of whimsy do you Rob Fisher and it is bubblier, with more of an upbeat. I’m glad you think so and have decided to join in the discussion as I thought for a moment that you had nodded off. Please take note how the length of this track allows these wonderful musicians to stretch and show their instrumental talents to the best of their abilities.

Hand up again Martin, oh you need the toilet. Okay be quick about it and no, it isn’t an excuse for everyone else to go, you can wait until the end of  the lesson. Whilst Martin is out of the class, the band will have time to retune and I would like the class to ponder on the rather delicious keyboard contributions on this album from Messrs Sverker Magnusson and Martin Borgh which are most excellent indeed. Now Mr Hutchinson has returned to the fold we can continue with Track 7, Over My Eyes….

You seem quiet Miss Roebuck, why don’t you take a moment from drawing love hearts on your exercise book and tell us what you thought of this song. Who is the lady playing the exquisite  violin on this one you ask? It is none other than the lovely Rachel Hall who plays in a band I consider to be one of  the front runners in Progressive music today, Big Big Train. If you remember I told you at the start of the lesson that Rikard, apologies Mr Sjoblom, plays in the very same band. Yes it has a rippling piano lead in, Emma, and the violin does float above it like birds over the farm fields under a darkening sky, very imaginative. You can stop the sniggering David Elliot the birds would not be plopping on your head, I swear shaking yours has done some damage.

We now have Track 8 which is called Old Demons Die Hard….

What are you whispering to David Elliott, Rickinson? You think the title is about me, don’t be so facetious, see me afterwards. Tony Honour the view out of the window is not that interesting, why not give us your thoughts on this song. It has a blues and jazz feel to this one in places with some intricate guitar work that at times reminds you of your Mum’s Steely Dan LPs. She still has LPs, I’m impressed. It has got some very good bass work too, yes I would concur.

Now class, we have another of those instrumental tracks, Keith (Son Of Sun)….

Mr Hutchinson your thoughts on this one? You thought it was quite ‘lush’, smooth and laid-back did you. A bit like Mr Trimming with his feet up on the desk at the back there, take them off please Leo.  That means you won’t be able to walk does it, very funny. You can wait behind with Rickinson at the end of the lesson as well. It sounds like a church organ at the start you say Turner, I suppose it does and yes there are intricate rhythms which show great restraint to create a ‘chilled’ tune. Well I can’t argue there Turner and I would say the jazz influences give it that sort of  vibe.

Does anyone know what ‘penultimate’ means? Your hand will drop off as well as your feet Leo, if you keep waving it that frantically, but please enlighten us. You are quite correct it means second last, which Elliott unfortunately was in last week’s cross country.

And so we come to the penultimate and longest tune on the album, The River Of Sadness….

Mr Fisher, you have your hand raised. You feel it takes you on an emotional journey with all the differing changes of tempo and you like the various soloing with whirling keyboards and guitars which go from laid back to more aggressive. Yes Emma, it does showcase everything the band are capable of whilst being a track that sums up the album nicely and despite it’s length it seems to be over quickly and you would like to hear it a few more times to hear all the subtle nuances. Well you all have a digital file of the album to listen to tonight as part of your homework so you can do so when you get home.

So who noticed it was actually two tracks and that The River Of Sadness leads straight into the final haunting tune with spoken vocals which reflect that maybe it’s All A Dream. Yes Martin, I agree that it is the ominous synthesiser rumble combined with the echoing piano keys that create the atmosphere on this and in being brief leaves you wanting more.

Well that’s it and there’s the bell for home-time, if we could give Mr Sjoblom and his associates a huge round of applause before we leave for taking the time to gift us the thought provoking music on this wonderful album. Please listen to it again tonight and I expect at least a two page essay on my desk tomorrow with your full review and no rude diagrams in the margins this time Trimming.

Make sure you consider the impressive mixing and production values and don’t fail to mention Mr Sjoblom’s accomplished 12 string fretwork along with his other talents.

By all means let your parents have a listen and please inform them the album is released on 19 May,  should they wish to purchase on 2 CD Special Edition and will be available on all digital platforms. You might also mention to your Mum, Tony Honour, that it will also be available on 180g double vinyl which may pique her interest.

Class dismissed! Not you Trimming, Rickinson. You two can stay behind and help Mr Sjoblom and his band take the equipment out to the van. Not fair you say Mr Turner and Miss Roebuck, anyone else think so? Very well you can all give a hand, but don’t be late home and be careful with the equipment.