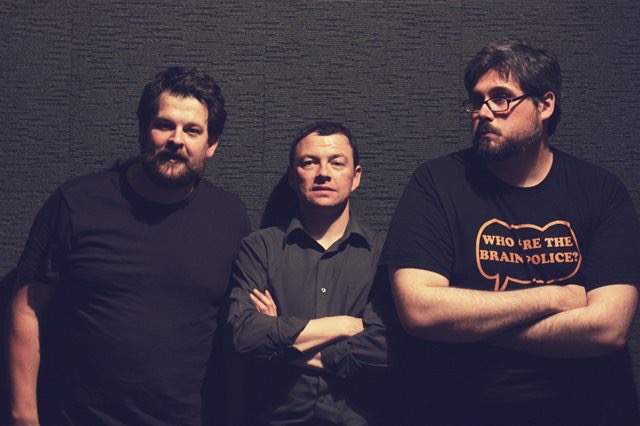 Well, this came out of nowhere. I was expecting that The Fierce And The Dead’s next outing would be the third album current being recorded in seclusion with an as yet undisclosed name or release date. Suddenly the Bad Elephant Music promo number 36, ‘If It Carries On Like This We Are Moving To Morecambe’, magically appears in my in box.

I never reviewed the original but had to revisit it to see what they had done to the smartly repackaged remaster. Mark Buckingham’s stunning artwork suits the band perfectly, the intrinsic darkness of the music mirrors the graphic novelist’s style very well.

I often think very little of remastered albums and feel certain artists are just cashing in on or increasing their pension plans (no names no pack drill etc.)  I have all the TFATD material and Matt Steven’s solo stuff anyway but always felt it didn’t quite reflect what they did in the live arena, the sonic assault of the back line and the bass smacking you squarely in the chest, letting you know they had arrived and will not be ignored. The live version of Andy Fox, one of the bonus tracks on this release, has a crystal clarity and solid punch to it. The whole package is far more dense but,yet, has a clarity to it, it is not muddy or thin in the least and is a lot closer to what the band does on stage.

For those who have no idea of who The Fierce And The Dead are, they are a project that grew from Matt Stevens playing with some guys rather than doing his looping acoustic stuff and it gelled very quickly into a full blown project and the original version of this album was the first product of that. They grew from being a ‘Krautrock’ ‘electronica’ to something far harder edged with the addition of a second guitarist. They now have a line up of Matt (guitar), Kevin Feazey (bass), Steve Cleaton (guitar) & Stuart Marshall (drums) and with a hugely dedicated following to boot. Instrumental hard edged music that brooks no compromise but has a wicked sense of fun all rolled into one great package.

This is the version that I think, in 2011, they would have actually released if they had been able to.  High points for me are Landcrab, 10×10, and Daddy’s Little Helper. They all benefit well from the remastering process and it breathes a new life in to them.

I am completely convinced this it was a very good idea to revisit the original release and make the best of the masters from what is the beginning of a very unique gem of an outfit. RoSfest in 2017 is in for a treat indeed!