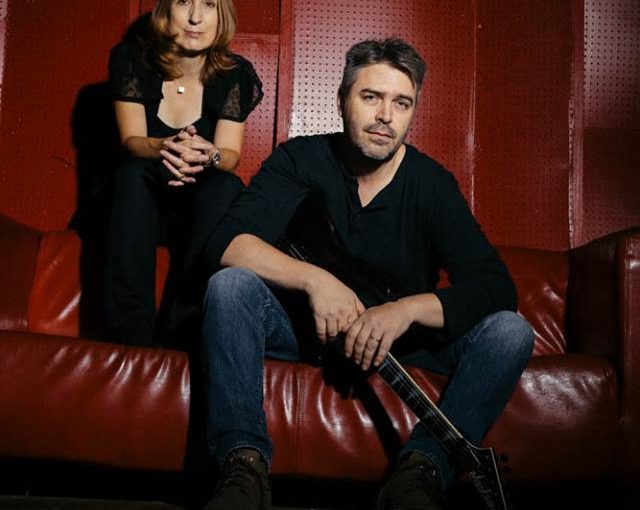 I love revisiting an artist when they are releasing a new album. It is always great to see how they have progressed and if their sound has changed. I reviewed ‘Unforgiven’ by Gabriel last year and this was my conclusion:

“A classy blend of hard rock, metal and symphonic rock with its own core identity, Gabriel a massive sound for just two people. Pigeon-hole them if you dare, there is more going on with this musical collaboration than you could fit into any one box. Sally Elsey’s vocals are worth the entry fee alone but, with the excellent musical talent of Albert Vinasco at her side, you have something a little bit different and special.”

Gabriel is a collaboration between singer/songwriter Sally Elsey from London and guitarist and recording engineer Albert Vinasco from Buenos Aires. Together, Sally and Albert combine their highly melodic approaches to create music that is both sweet and powerful. Sally primarily composes her music around piano-based progressions and lyrics. The result is a soft, warm and melodic sound that is full of dimension and emotion.

Together, Sally and Albert combine their highly melodic approaches to create music that is both sweet and powerful. The result is Gabriel. All music is written, recorded and produced by Gabriel (Sally Elsey and Albert Vinasco).

I was approached by Sally earlier this year to give my impressions on their new release ‘Sacrifice’. The new album sees this talented duo mature and offer a hell of a lot more than what a stereotypical so-called ‘female fronted metal band’ would. You wouldn’t think this so much from the first two or three tracks. Running has the powerful riffing and energetic percussion that typified the previous album. Add in Sally’s distinctive vocals and you have what I would have previously called the definitive Gabriel sound, powerful but with a silken core, Albert’s guitar flwoing freely and giving the music its direction. Falling Down has the symphonic vocal opening again heard often on the last release. There is a dynamism beginning to make an appearance though, something less in evidence on ‘Unforgiven’. Sally’s voice has that gossamer feel that comes from an almost operatic delivery and then the music powers in and gives an edgy aura, almost Karnataka-esque. Both these songs are great tracks and carry on the Gabriel legacy, a sound that invites you in on the promise of more to come. There’s almost something spooky about the intro to Holy water, Fire and Ice before it bursts out in the a pastiche of overblown 70’s blues rock, a very enjoyable pastiche though. The riffing is hard-edge and tight and the drums have all the energy of a runaway locomotive. Sally’s vocals take on a more aggressive and energetic style and the whole track really rocks. A funky, blues tinged hard rocking solo keeps things flying along in a perfectly enjoyable manner and all seems to be in order.

Things take an interesting turn with the wistful opening to Rebecca, a song with an almost Celtic feel to it. The delicate piano note matches Sally’s ethereal vocals perfectly before this track opens up and blossoms into something more solid and visceral. Things ebb and flow with seeming intelligence all of their own, a keyboard that could have come straight from the 70’s adds a wicked aura and the flamenco style guitar picking gives another layer of sophistication. To me, this is where these two impressive musicians take things to another level and really improve their sound adding additional maturity. This carries on with the intensity of Broken, an intelligent song that really raises the heart rate with its heightened intro. Slow and brooding with a dark heart, I really liked the way it seems to creep into your psyche and take over. There’s something I can’t quite grasp going on, something clandestine that is enhanced by the short and calculating guitar solo. A song that really moves the game on for Gabriel. That feeling of unease, of being observed from afar carries on into The Watcher, another deliciously sombre and shadowy song that demands your attention. There are subtle nuances and ruminations at play hear, an heightened intellect that is always just out of reach. The music just seems to roll over you and subjugate you with its dark intentions. The music has moved up several notches in my opinion. I love the wistful beauty at the heart of Suddenly, a track that grabs at your heartstrings with its melancholy feeling. Sally’s voice has real touch of sadness and sorrow to it in places, it matches the sparse elegance of the music perfectly. The chorus lifts the gloom and sees shafts of sunlight appear fleetingly. This is a song that really plays on your emotions, the lows of the pensive verse in complete contrast to the highs of the appealing chorus. Now to perhaps my favourite track on the album, The Reveal opens in that symphonic style, a winsome and nostalgic feeling pervades everything, gentle piano and soulful vocals blending perfectly to engender a feelgood atmosphere and sanctuary before the guitar kicks in with a smooth riff that just takes me back to some of the great rocks riffs of the 80’s, think Clannad meets Whitesnake (pre-1987)and you won’t be far wrong. A real melting pot of influences and sounds that Gabriel blend together perfectly and a song that shows they have moved their game on considerably. Beyond The Highlands is another track showcasing the new direction that the band seem to be going in, not sticking to any one stricture but successfully opening up their palette of sounds to a number of new influences. It builds up wonderfully to give us something akin to a Mike Oldfield vocal track but with more density and substance. The light and airy guitars are a delight and Sally gives one of her best performances on the album, subduing the symphonic/operatic style for a more rock and folk friendly delivery. It is at this point that I actually went back to listen to ‘Unforgiven’ and it showed me how far that Gabriel had come, the increased sophistication and variety that their music has now.

True Believer is a proper ‘rock’ track in the true sense of the word, powerful and insistent riffing matched by the tireless percussion and the spirited vocals. A proper foot-tapping or even head-banging song that drives on relentlessly, you know exactly what is coming next and Albert doesn’t disappoint with his stellar guitar solo. A really enjoyable ‘balls-out’ rocker that put a big grin on my face. An aggressive riff opens title track Sacrifice and we have an intriguing song in front of us. A bit of low down mystery is added by the subdued music and vocals that follow but that in your face riff returns on the chorus with added attitude and belligerence. I can’t help but be put in mind of that great American band Heart and their break through hit ‘Barracuda‘ with the raw hostility at the core of this song, especially the coruscating and edgy solo, vintage stuff indeed! Benedictus closes out the album in a Latin choral style with the haunting chanting delivered perfectly by Sally at the start of the song delivering a sublimely ethereal and ghostly aura before Albert lets fly with a blistering guitar solo that smoulders with a searing energy. The beautiful vocals return and the guitar plays a vistuoso lament over the top before the song and the album come to a close with the graceful piano and Sally’s tender vocals.

‘Sacrifice’ is an excellent album and one that sees Sally and Albert seriously move their game on from the great ‘Unforgiven’. This release sees Gabriel mature into an exciting band that still hold onto their core values but one that is now happy to explore different musical avenues and incorporate them very successfully into their future direction.