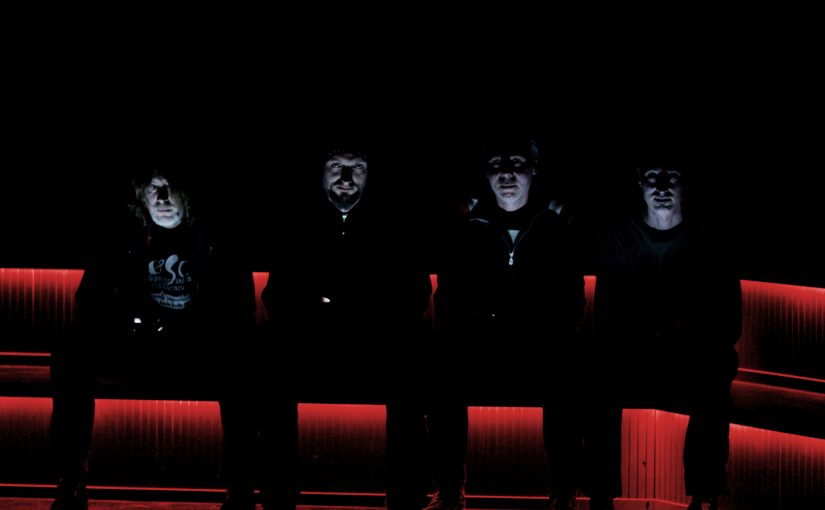 A Turneresque cover painting gives vague hint to the type of music and the details on the cover give minimum information. A quick bit of research and these Dutch lads describe their music as deeper, mesmerising, atmospheric and melancholy. If you know of David Lynch, director of ‘Blue Velvet’, ‘Mulholland Drive’ and ‘Twin Peaks’, this album could have sound tracked any of these.

A dark evening, you enter the foyer of a private club greeted by a smiling girl all curls, curves and red lip gloss, she parts red velvet curtains and leads you into a dimly lit room furnished in deep red velour seating with tables. Smoke from cigars and slim cigarette holders hangs in the air. Whispered conversations, furtive glances across the hazy room and a small stage on which a band appears, the instrumental first track The Dying of the Light plays muted keys with the sound of crows and other birds echoing round the room. The conversations die and all eyes focus momentarily on the stage as you take your seat in a booth.

Dressed in a dinner jacket with open necked white shirt, the lead singer pulls up a stool  to a small dim spotlight at the front of the stage as the band plug in. The singer rests on the edge of the stool with his guitar and with one foot on the floor for balance he grasps the vintage Shure microphone like a lover and pulls it towards his lips until they brush lightly together as the first track fades. Acoustic guitar strums, and he begins to pour his heart out in a languid, sleepy voice. A well groomed woman gives a large man sat next to her at the table a determined look, shakes her head negatively and rises, pulling her hand from the sweaty grasp of his chubby, gold sovereign laden digits. Her silk dress slides between the tables as the music rises she’s Walking Away,  and won’t be returning to him. The  vocals and instruments echoing as she fades into the smoke and away through the curtains, into the foyer, where Miss Red Lip Gloss sits on a stool, distractedly filing her crimson co-ordinated nails .

She doesn’t notice the woman leave as she’s in a world of her own from which she wished she wouldn’t have to Wake Up. Drums are brushed and electric guitar flows with keyboards in sombre reflection as the third song drifts in to her consciousness with haunting brass sounds. This isn’t the direction in which she had seen her life going but at least she was safe here for now as no one knew  her real identity and had food and lodging.

Back at the table the large man waves a weighty hand to a waitress. She teeters toward him on slim black stilettos, in short-skirted uniform, with a small pillbox hat held on her tightly fastened peroxide hair, a single spiral hangs to one side. She deposits a bottle of champagne on the ring stained table top and he waves her away without a glance. He draws on a large cigar, exhaling the cloud toward the stage as he ponders the,beautiful intro and melancholy lyrics of the fourth song reflecting on his life, things would Never Change. There was a time he had loved the girl who had just left and he’d not been a bad man, but money, avarice and jealousy were now his only companions. She’d begged him to take her away from it all and they could live like the carefree young lovers they had once been but he craved other things and she had become merely a distraction.

The singer steps away from the microphone to briefly slake his burning throat with cool beer between strummed chords, washing away the smoke as the band play an instrumental piece. The gangster man feels a momentary twinge of grief as the memories and the Ghost of Caitlin are all he now has left of the relationship and the music swirls and eddies. Then regret is gone in the fleeting twinkle of a blonde’s eye as the waitress now catches his sight-line, maybe she’ll do for tonight. Just another desperate wanting to improve her situation lured easily by a fur coat and a few sparkly  gems, which he can easily afford. No commitment, though he’ll promise the world and take what he wants, then have his driver discard her at the roadside the following morning amid the tumble-weed, futilely hoping it will eradicate the memory of his lost love.

Returning to the microphone and surveying the punters robed in fetid air, the band observe the roles played out, it’s just another night in the joint. As the singer stretches out the stiffness in his neck the band behind him bring in the title track Tides. The bass throbs, as it has throughout, a dulled pulsating heart pumping vibrations into the room, the drums the beating life. The subdued rhythms of the guitars with drawn out chords mourn to the lamenting keys and soundscapes created. The singer stares at the rotund man in the booth with red veined jowls and as the lyrics come to him he starts to sing again, a cautionary tale. Following on the sweetly sombre instrumental Undertow mimics the roles in the room as clients indicate more drinks and nibbles, whilst waitresses scurry to accommodate, emptying ashtrays unobtrusively, hoping for generous tips to bolster their meagre wages. Business is good tonight. Ushered in by the choral accompaniment at the end of the track, a  man in a wool suit and slim black tie parts the foyer curtains, two uniformed policemen accompany him. He steps forward with them, the broad brimmed trilby on his head pointing the way as they move toward the sovereign fingered gentleman. Everyone watches cautiously as they pass by, turning faces to shadow.

The band continue with a dark, atmospheric backing track to the performance unfolding as the words echo The Stone In My Heart to the retreating officers, as they lead the handcuffed sweating man. As they negotiate his sizeable bulk between the tables of the booths watched by their shady occupants, there but for the grace of…. She may not think so but the blonde waitress has escaped a humiliating experience and will have to wait for her real Prince Charming to save her from the monotony.

Her position however has not gone unnoticed by another. She has a delicate frail naïvety about her that begs to be taken away from this tainted existence and the singer smiles at the waitress as she passes. Her baby blue eyes widen and she blushes as she moves to task, glancing over as she flits between tables. Carpe Diem, seize the day, lift her misery. Nothing gained nothing lost, the singer turns to the band as the purported final track of the evening fades out on beautiful keys and looping chords and they nod in sage agreement. A few light chords introduce bonus track, River,  to a complete contrast as the band raise the tempo and the singer grins like a schoolboy at his fancy. A rocking drum beat picks up the bass and Coral like steel guitar cuts in western style with slide and jaunty organ. He holds her gaze as he plays and sings a promise of better things. The waitress sways to the up tempo as he moves off the stage across the dance-floor toward her in time to the driving keyboard and announcing his intentions, she smiles agreement, nods and he returns to the stage. Guitar swaggering in his hands with pause for effect the band slide out on a single distorted note and people make their way to the exit.

The band begin packing their instruments and as he bends to lock his guitar case a shadow falls by the singer. He looks round and there stands the waitress, hat discarded and coat in hands her smile as wide as her eyes. Picking up his guitar in his left hand he takes her left in his right and they make their way to the rear exit. They push open the back door and make for the band bus. It swings shut revealing a poster for this evenings entertainment, from the band, Downriver Dead Men Go and lists the members:

With airs of the Editors and Nosound for reference, the band may not be to everyone’s taste, but it has seeped into my brain and become one of my favourite albums of the year so far. If like me you are partial to  a bout of emotionally dark, slow rock when the fancy takes, then I urge you to buy this. They could be an interesting prospect live.