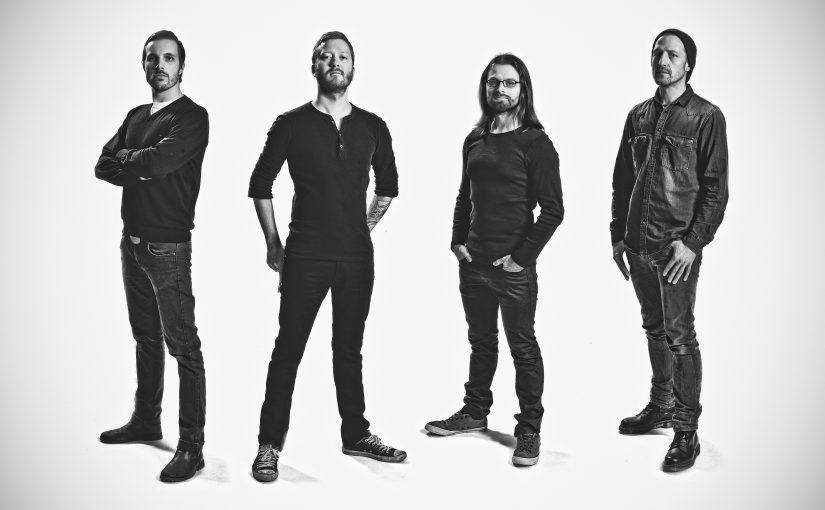 Spofify, is it the Death Star of streaming that could, one day, lay waste to what most of us (of a certain age) perceived to be the music industry? Or, is it being lambasted unfairly? Is it the modern musical world’s way of allowing more people to find music that they like (despite only paying the artists an absolute pittance for their work?).

Nowadays, I would say that I sit firmly in the seat of the former but, in days gone by, it would have been fair to say that I discovered a lot of music by the use of this algorithm that is seen as the very essence of evil in some quarters.

To be fair, I wouldn’t have discovered Long Distance Calling if it hadn’t been for Spotify with its memorable green logo. By using the ‘similar artists’ feature built into the software, I came upon many artists whose music I enjoy today, this German prog infused industrial metal outfit among them…. Where other bands vainly tried to live up to wannabe-avantgarde terms like retro-futuristic or Post-whatever, LONG DISTANCE CALLING lived in their own bubble from the very beginning. After emerging as an instrumental Rock band of wonders with their soaring debut ‘Satellite Bay’ in 2007, the Münster based outfit quickly earned a genre defying fan base, touring with everyone from Deftones to Anathema and Dredg. They never stood still and always did what their music demanded – even if it meant to welcome a permanent vocalist in their ranks, a trick they pulled in 2012 by adding Martin Fischer to their line-up.

A stunning album carefully translating old structures into a new universe, a marvel in its own right. What used to be an amalgamation of the band member’s eclectic tastes has now become a many-headed beast, a Janus figure feeding off Rock, Metal, Alternative and Pop – and Prog, to be exact: ‘TRIPS’ is not so much a continuation of established virtues, but a bold move into the unknown……

The album opens with Getaway, an electronica tinged instrumental that makes your ears prick up almost immediately with its flowing keyboards that invoke dystopian scenes. The edgy guitars and insistent drum-beat open up into a really retro feeling tune, almost akin to Kraftwerk meeting Tool in a dark alleyway and having a jam session. My memories of Long Distance Calling were supremely heavy industrial and instrumental metal so this is a real chip off a new block for me and I really like it’s addictive nature and upbeat feel. Reconnect carries on with the electronic aspects of the music but, this time, with an edgy and urgent tone. We also hear Petter’s stylish vocals for the first time. This guy has a great range to his voice, he can do earnest pop music right the way up to heavy metal and do it very well indeed.  The track has an almost ‘stadium rock’ vibe to it (if a lot heavier), you can imagine this powerful and echoing industrial music filling any arena that the band would choose to play at. The strident, twin guitar sound, thumping bass and energetic drums all add to the impressive dynamism. Rewind is superb, there, I’ve said it. A slow burning, pensive, mournful track that builds up gradually to finally erupt, volcano like. Petter’s opening vocal is low down and ardent, the piano adding a sombre note. The vocals become more impassioned, the virility of the music following suit. The monstrous chorus with the weight of the world upon it is really rather good. It is a brooding piece of music, perhaps formed in the forges of the bleak musical hell but they have realised a thing of stark musical beauty. It may be dark in places but it just adds to the attraction, really rather impressive. Now, Trauma, that’s more like the Long Distance Calling that I remember. A thunderously powerful instrumental with huge riffs carved out of granite. You know, this would scare small children if they stumbled across it by accident, I love it. There is a monstrously large soundscape at play here and one these guys know extremely well. The band have expanded their musical nous immensely but, boy, do they do heavy instrumental prog-metal as good as anybody out there. Even the laid back, almost cultured interludes are magnificent. Lines begins with a touch of Porcupine Tree, intricate musical interplay and Petter’s dynamic vocal but, that’s where the comparison ends as the whole thing is blown apart by a rapid drum beat and discordant guitar note that heralds a real heavy thrash metal attack on your senses. A breakneck guitar riff and a rhythm section founded on something illegal don’t give you time for pause or even a breath and, bloody hell, is it addictive! An idiotic grin plastered across my face, I’m really enjoying the carefree attitude to the music. Sleek, cultured interplays break the speed-fest and give you time to think, the squirreling guitar solo is excellent but, it’s the riff-fest we’ve come for and we will not be denied or disappointed. Coming in at under two minutes Presence is almost a musical palate cleanser after the hell-bent musical barrage of the previous track. A laid back, calm and collected voice-over with a wistful and pensive note and very tasteful. Skillful electronica returns with another instrumental, Momentum, the drums providing focus before some rather sci-fi inspired keyboards and a probing guitar take on the mantle. Intelligent and clever it may be but, it never loses sight of the core progressive and metal roots of the band. There is a real feeling of exploration of the unknown to the song. In places it actually reminds me of Public Service Broadcasting’s last album, ‘The Race For Space’. It plays along with a metaphorical ‘wry smile’ on its features, all playful and fast paced. Once again you see the band taking a big step away from what they had become known for and becoming a much more rounded package because of it. Towards the end the guitars and drums become much more pronounced and give it a harder edge, mixing the old with the new. Plans opens with a mournful, almost funereal tone. Dark-edged and slightly mysterious, Petter’s vocal only adds to the uncanny feeling. A haunting and jangling guitar adds an uneasy aura and the electronic effects an eerie undertone. The languid pace and unearthly vocal do nothing to ease the feeling of dread, it is deliciously spine tingling and then it is as if the beast has been unleashed. The guitars, drums and keys march on in a steady immovable fashion, where this is leading to, you have no idea. Crunching riffs arrive, the drums go up a notch and you are in the middle of musical maelstrom of incredible force. It throws you from side to side, caring nought for your safety and, yet, you do not fear anything, this is where you belong and want to be. We have arrived at the near thirteen minute instrumental climax of the album, Flux requires more than one listen to plumb its herculean depths. It is a psychedelic trip of excess and grandeur building from a humble opening. Lay back, turn out the light and let the twin guitars wash over you as they build the scene and the story. The drums and the bass are the punctuation in a musical odyssey too big for mere words to describe. The opening minutes are quite hypnotic and mesmerisng as this unique musical tapestry opens up to your inner heart and soul. It gives a feeling of treading water, no rush and no need to be any where else than hear, listening to the song. The guitars clash and then the pace quickens as you are pulled out of your near-trance, a new urgency abounds as the drums pick up the beat. The track begins to ebb and flow, quiet sections seamlessly segue into intricate, guitar based, interludes as you are delivered a veritable musical extravaganza to explore. It is said that, on ‘TRIPS’, the band utter the wish to travel through time, to relive certain moments, but also to undo certain things they said, to spend more time with lost ones they once held dear. While making this album, five grandparents of members in this band died and a baby was born. This left its marks on them and only adds to the fact of what a strange and fascinating thing time actually is and it is explored in full on this memorable closing track.

A monumental exercise in making music, a huge, herculean creation of impressive proportions yet, deep at its core, there is an overlying vestige of humanity and everything that makes us great, ‘TRIPS’ is Long Distance Calling’s most impressive effort to date and reminds me of why I liked them all those years ago. Very good indeed.

Pre-order ‘TRIPS’ from Inside Out Music