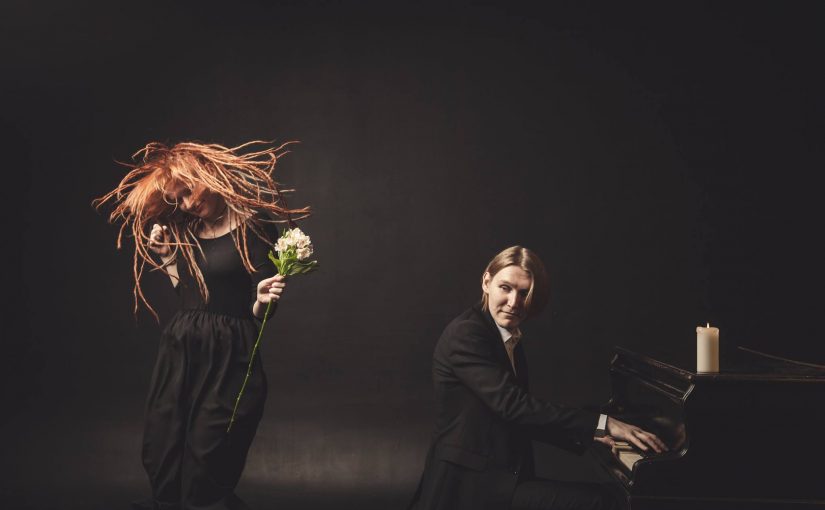 A literal definition could be:

Music is an art form and cultural activity whose medium is sound and silence. The common elements of music are pitch (which governs melody and harmony), rhythm, dynamics (loudness and softness) and sonic qualities of timbre and texture (which are sometimes termed the ‘colour’ of a musical sound…

Or, if you want to get more personal about it, Victor Hugo once said:

In any way, music is an intangible thing, you cannot touch it, only your ears translate the tiny pressure waves of sound into what you think the notes are. Music, to me, is an inspiration and part and parcel of my everyday life. I can’t live without it and I have music that helps me appreciate the highs and music that helps me get through the lows.

Some music has a beauty and grace all of its own and that is what I am here to talk to you about now. Today’s review is the new album from the Russian duo iamthemorning… Formed in 2010 in St Petersburg Russia, iamthemorning features pianist Gleb Kolyadin and the charismatic vocals of Marjana Semkina. The band self released their debut album in 2012 before signing to Kscope and releasing ‘Belighted’, their first record for the label in September 2014. In 2015 they toured Europe with labels mates, the art-progressive outfit Gazpacho last year.

As with ‘Belighted’, the engineering and mixing on ‘Lighthouse’ is handled by Marcel van Limbeek (Tori Amos) and self produced by Gleb and Marjana. The album also features guest musicians Gavin Harrison (Porcupine Tree, King Crimson) on drums, Colin Edwin (Porcupine Tree) on bass and additional vocals on the album’s title track by Mariusz Duda (Lunatic Soul, Riverside).

‘Lighthouse’ is a rich and eclectic album, with echoes of classical music, the Canterbury scene, northern folk, jazz and electronic sounds. Featuring a story of the progression of mental illness, the album takes the listener through the stages with the story’s central character, her attempts to fight it, temporal remission leading to a final breakdown. Lyrically, the works and lives of Virginia Woolf and Sylvia Plath inspire the album.

Recorded across London, Moscow & St Petersburg, the core instrument of the band, the grand piano, was recorded in Mosfilm Studios Moscow, the largest and oldest studios in Russia. Founded in 1920, Mosfilm is renowned for recording orchestras for soundtracks for the most famous Soviet-era films, including works by Tarkovsky and Eisenstein.

The album artwork for ‘Lighthouse’ was created by watercolour artist Constantine Nagishkin who the band have previously collaborated with before.

I Came Before The Water, Pt.1 is a short track with a decidedly ethereal quality. Marjana’s spellbinding and beautiful vocal just grabs your heart and, backed by delicate strings, it just leaves you full of emotion. There is more of an urgency at the start of Too Many Years, Gleb’s driving piano driving the whole song on at a fair lick. Marjana’s earnest vocal joins the ivories to give you a melting pot of desire and heartfelt passion. The song opens up with the stylish rhythm section of Gavin Harrison and Colin Edwin to become an intelligent and incisive narrative that holds your attention. The swirling strings add an admirable backdrop to this impressive tune that insinuates itself into your psyche. The next track Clear Clearer begins with a wistful note, a winsome tone that Marjana takes up with her captivating vocal. The driving piano once again stops the track from becoming too delicate and lacking substance. The lovely little vocal interludes whee the lines are repeated just leave a charismatic smile on your face before Gleb’s piano and some rather tasty keyboards add another veneer of class and let the track run out with a knowing nod. The charming and absorbing intro to Sleeping Pills is provided by yearning vocals and an a delicately played piano to leave you with a feeling that something momentous could be about to happen. Here Gleb gets to be centre stage with his artistic fingers directing the music, the haunting strings and breathy vocals adding a light alien feel of otherworldy-ness. The track begins to rise to a powerful crescendo, leaving you transfixed and left in awe. Libretto Horror is a pared back little piece of chamber music inspired beauty. The vocals dance around your mind and Gleb’s piano holds court over everybody. It is transfixing with its simple and uncluttered delivery. There is a feel of wild abandon to Marjana’s voice and it adds a little bit of the unknown, I like it. Now onto the wonders and delights of the title track, Lighthouse. The song opens with a meandering piano and graceful, guileless vocals from Marjana that bewitch your very soul. It works its way around the inside of your mind, holding your attention, slowly brooding as the track builds to a zenith and the introduction of Mariusz Duda. The song takes on a smoother vibe with the delicious vocal interplay between Marjana and Dariusz, iamthemorning definitely seem to have matured with this new release, there is less of a gossamer feel to their sound. The music has a sophisticated and cultured feel to it, there are layers and layers of intricate depths that slowly reveal themselves and it is showcased perfectly on this brilliant track. Harmony invites you into its own little world. The delicate soundscape brings to mind a bright summer day with birds and butterflies aimlessly traversing the skies and leaving you feeling like you don’t have a care in the world. Music used to create a picture in your mind, a world set aside from the one you’re really in, subtle and very clever. The piano then begins, Gleb’s playing is brilliant and almost takes on a life of its own, it is mesmerising and enchanting and I find that I have stopped whatever it is that I was doing just to make sure I don’t miss a note. The song steps up another level with the quality bass and drums of Colin and Gavin added to a sleek guitar to give this classy instrumental even more kudos, a very creative and perceptive piece of music. The opening to Matches brings back that pared back, more simpler feel where Marjana’s delightfully unadorned vocal joins Gleb’s piano to deliver an aural delight. The rhythm section then joins in to give it a feel of classical mixed with jazz and it works exceedingly well, the music seeming to evolve, becoming more complex than it was before. Heartfelt, emotional and purely delivered vocals open Belighted giving it a contemplative and melancholy feel. The tinkling of the piano keys and the mournful strings only add to the plaintive and sad feeling. However, beauty and grace can be found in all situations and it is thus with this tastefully refined track. It does feel sorrowful and it leaves your own heart open and bleeding but with a feel of something sublime that has been lost and you feel bereft by its loss. The first track released from the album was Chalk and Coal and it made me sit up and take notice. Perhaps a more radio friendly song but defiantly non-mainstream. A powerfully building opening with Gleb’s slightly discordant piano and the haunting vocals leaving a slightly ominous atmosphere, only added to by the eerie trumpet playing. I get a feeling I’m in the middle of a musical version of an Edgar Allan Poe novel as a slightly off key guitar and that forlorn trumpet leave you slightly on edge. It is subtle and clever stuff and really gets your mind working overtime. I Came Before The Water, Pt. 2 revisits the refrain of the opening track on the album but, this time, with a much more sparse feel, Marjana’s anguished vocal opening the song as a lone note. The feeling of grief presses down on you, almost overwhelming, as the strings seem to tear your heart apart before the song closes out all mysteriously. The final track on this majestic musical journey is Post Scriptum, a mellow track where Gleb’s piano directs proceedings. Colin Edwin’s bass is much more demonstrative and emotive, driving the track on. There is a feeling of a lament at the heart of the music, it closes out the album with a slight note of mourning but doesn’t detract from the wonder of what you have just had the pleasure of listening to.

‘Lighthouse’ is an amazing musical journey from the first note to the last. It is bewitching and beguiling and removes you from your everyday life to a place of wonder. Darkly captivating, it is not all sweetness and light but is a musical legacy that iamthemorning can build on and the ‘Lighthouse’ can light the way. These two exceptional artists have now moved into the major leagues and it is well deserved, album of the year? why not!

(ALl artist photography by Alexander Kuznetcov)