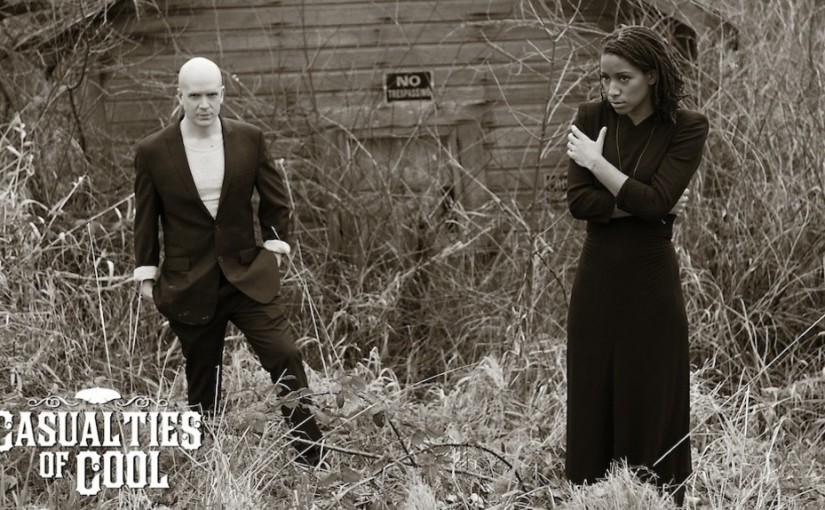 I didn’t know what to expect when I agreed to review this.

The only album I possess by Devin Townsend is ‘Ghost’ which is, I’ve learned atypical of his output. ‘Ghost’ is a beautiful ambient collection that drifts and soothes the soul.

First listen to this indicates that it is closer to that vibe than the rest of his output. The opening tracks have a driving percussive attack that is more skiffle than anything else. One thing that made me smile – my son came down from his room to complain as the bass on the opening track was making his bed vibrate! Now I was not playing it loud, it was late at night after all, but that‘s the sonic palette used here – subwoofer friendly bass to the front.

The voices are multi tracked and muffled, this adds a ghostly feel to the songs, layering atmosphere on top of the beat. Lonnie Donegan on acid, but in a good way. Track 2 puts me in mind of a male fronted Cocteau Twins or a less cerebral Dead Can Dance.

If I try to relate it to a more Prog centred audience, imagine the narrative from Hawkwind’s “Warrior On The Edge Of Time” with all its twisting harmonies and dense soundscape, but without any reference to Sword or Sorcery. The feeling of claustrophobia stays, the voices buried beneath the mix, I’m sure the lyrics are deep and meaningful, but they are a layer of sound here, echoing around as the guitars are strummed and a droning wind storm of orchestral force swamps the mix.

It’s muddy and dense, whether this is the intention of Mr Townsend or not, all I can say is listening to it for the first time through headphones (out of deference to my son) is immersive, perhaps too immersive as the music is second place to the low frequencies.

I’m wondering if it’s also a by product of new headphones (blue tooth) and the format that the files came through in – MPEG-4 Audio , not a format I’m familiar with, being a top end MP3 or WAV man myself.

So far, the album has been a chilled mix of acoustic sounds behind this constant hum of bass and echo. Hello, still with me?

Well, I’ve been a naughty boy, and for the purposes of this review, I’ve burned the files to disc. I know, home taping is killing music, but the difference between the 5.1 speakers of the PC, headphones and now a proper Hi Fi for playing this album through is marked.

Through the Hi Fi, it takes on new life, the drone of the bass is gone, the tracks are lighter, still ambient with a background of hum, but it’s now peaceful, much more in line with ‘Ghost’, the vocals from Devin Townsend remind me of a French artist, another favourite of mine, Kid Loco. They’re husky and breathy, but measured, like Lou Reed singing a lullaby.

The warm mix is very Kid Loco too, in fact you could mix ‘Kill Your Darlings’ tracks with the tracks on this and they would complement each other nicely.

Perhaps that’s the best way to review, write down the albums that you’d use to make a mix tape / CD/ Flash Drive with the one under discussion. Everyone would suggest different musical companions, as we all arrive here via different routes. I’d add a smatter of Turin Brakes to the mix too as the gentle strumming acoustic guitars evoke their sound.

Hello world. It’s me again. I have a confession to make. On the third listen, I could resist no more and ordered the deluxe 2CD and DVD version.

Why, you ask, when you have the review copy?

Well, the first reason is , this is fabulous stuff, earworms that burrow through the headspaces and leave little bomblets of melody and tunes that nag away until you give in and put the CD on . The second reason, and this is just my personal stand, is that if I like this enough to say go buy it, it would be doubly hypocritical not to follow my own lead.

No musicians suffered as a consequence of this review. Quite the contrary, as the purchase will generate income and that hopefully the relationship between artist and listener can continue by virtue of upholding the tradition of paying for the pleasure.

So, in conclusion, if you’re partial to a (quiet) blast of Brian Eno, are moved by Sigur Ros, like melody, prefer music with space between the notes and are ready to embrace the sonic nuances here, and then take a trip with us, we don’t know where we are going, but we have the perfect soundtrack.