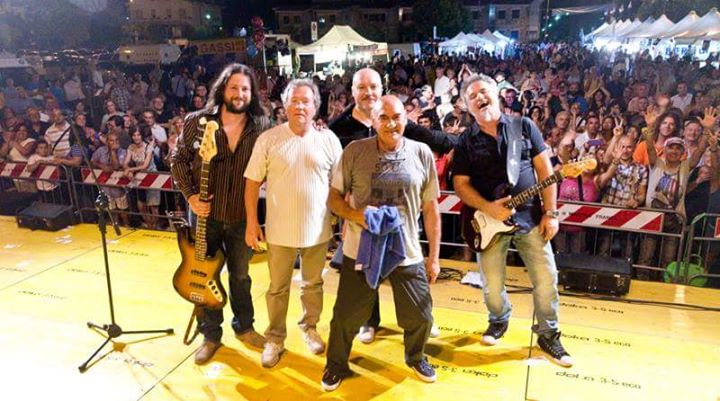 Progressive Rock, as it began in the late 60s (if you break it down into its component parts), arguably had key elements that were essential for it to be Prog. Skilled musicianship (if not virtuosity), an understanding of varied musical styles and the ability to distill it into your own identity and yet retain those obvious components in the music. These were, in the main, Jazz, folk, Classical, blues, soul and Rock, there are probably more but the essentials sit in there in the big 5 or 6 bands that broke through in the early 70s.

So onto UT  New Trolls who have a history that goes back to the mid 60s and grew out of that very tradition. I won’t go into their long and hectic history but they have been around consistently since 1966 with splits and reunions dotted across the recording world.

The sound is very obviously from that period when you hear it. Hammond organ and Moog synths are heard throughout this album with a thick solid production. The album was recorded at the back end of 2015 in analog so I assume no computers or digital instruments were used in the studio apart from the actual recording equipment.

To the album then, as a whole piece it feels like a journey through the history of music and I know that was the aim of the band when the conceived the project.  The Italians close connection with classical music and its history is very obvious in the first track Dies Israe (Day of Wrath), a haunting violin sat in front of a deep keyboard tone, ominous and threatening of things to come. Doom laden, it then jumps into a folk dance that I believe to be a Polka type rhythm in a truly insane change in tone of the track. This sets up the entire album to be filled with the unexpected and a delightful spirit. My translations may leave something to be desired but I am interpreting.

Cambiamente (Changes) is not a Black Sabbath cover but it rocks out as good as any can. It’s not prog metal but it is good rock in a progressive theme.

Io (I) is a ballad in a full on fist pumping passionate style that is worthy of any power pop band from the 80s or 90s, but without the 80s cold calculating production.

The epic Ostinato (determined) is classic prog track that many modern or classic bands would be proud to produce. It’s layered with experimental and melodic components that explore musical themes and is enough to fill an album from that one piece alone.

I’ve selected various tracks off the album as highlights and personal favourites but the 8 track album has something for every fan of progressive music. Do not let the fact that this is sung in Italian put you off, the lyrics ( of which I have no idea what they mean), on listening, become part of the music.

Musically, if you like Camel, Procul Harum, ELP , Yes, Early Genesis, Pink Floyd (Syd period) or Big Big Train, you will find something immediately familiar and reassuring for your aural delight.

As a friend who had listened to album before me stated, “It’s a bonkers album with so much variation to offer the listener”. I’d definitely put it in the ‘worth a punt’ box.

Buy ‘e’ from self distribution in Italy