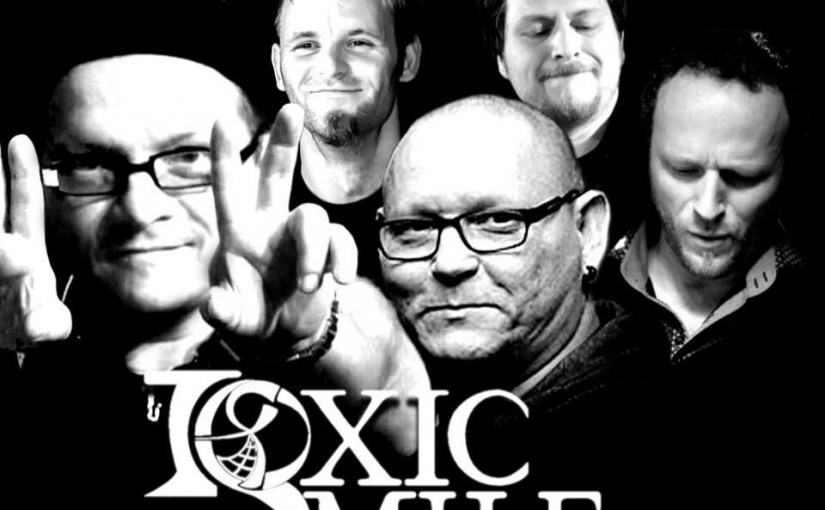 Two years after their release of ‘7’ back in 2013, Toxic Smile are back with new album ‘Farewell,’ which has a total of one track, yes you read it right, one track.

From your first glance of the album art, you are drawn in by the expressive and abstract style of brush strokes that give it a very emotive cover. However, to see that there is only one track, surely it must just be an EP? Then there’s how long the track lasts for… an epic 42 minutes. Toxic Smile took on a big task on writing an epic progressive track lasting for 42 minutes, it takes a lot of ingenuity, musicianship and a special amount of madness; they have combined all those traits, especially fantastic musicianship, to produce an epic journey melding styles and themes together.

Back in 2004 the band set to work on the classical project, which they then released in 2006, ‘……. in classic extension’. The opening of ‘Farewell’ straight away dictates the classical experience the band have had as the elegant sound of strings bows in to paint a tranquil scene before electric instruments are brought in and your sense of rhythm unravels.

A sense of pulse is a primary foundation for any piece of music because it provides drive and something you can tap your foot along to. Toxic Smile have realised this but chosen to ignore it at different moments during the progressive song. It’s almost as if there are 3 different time scales occurring as they all fall on different beats to each other, the drums have one beat and the synth sounds and bass guitar have different accented rhythms, it leaves you with an uncertain sense of what beat goes where. Although the sense of a strong rhythm from the audiences point of view is lost, it emphasises the skill the band have, to be able to keep different rhythmic lines occurring at the same time – fundamentally speaking – and then come to a regular rhythm where your foot can become mobile again.

Vocalist Larry B is not constantly relied upon to sing an extremely repetitive and superficial melodic line, which is very refreshing to hear – or not hear as the case may be. Vocal lines enter in stages and you can feel a shift in where the music is leading too. This, therefore, provides the emotive expression, in word form, of what they are trying to convey in the song.

Being such a long track, it would be expected, or at least hoped for, that the melodic material develops and changes, even remotely, in style; this is most definitely the case. Some style choices are surprising and, if written down on paper, could be shot down in flames. For instance, the combination of reggae and heavy rock seems an unlikely choice but Toxic Smile have made this odd idea work well.

The juxtaposition of distorted guitars and heavily pounding drums contrasts greatly with the chill of simple rhythms and melodies, with an off-beat accent for the reggae flavour. Nearer the end of the track the style heads in a completely unexpected direction into Funk town. The bass  becomes more alive with energetic riffs and the guitar has distinct swirling sounds as the drums change rhythms, the styles couldn’t slide more seamlessly into each other, despite the initial unlikeliness of melding them.

Overall, this is a great album transporting you seamlessly to different emotions from the variation they have in their one epic track.

One thought on “Review – Toxic Smile – Farewell – by Sabrina Beever”