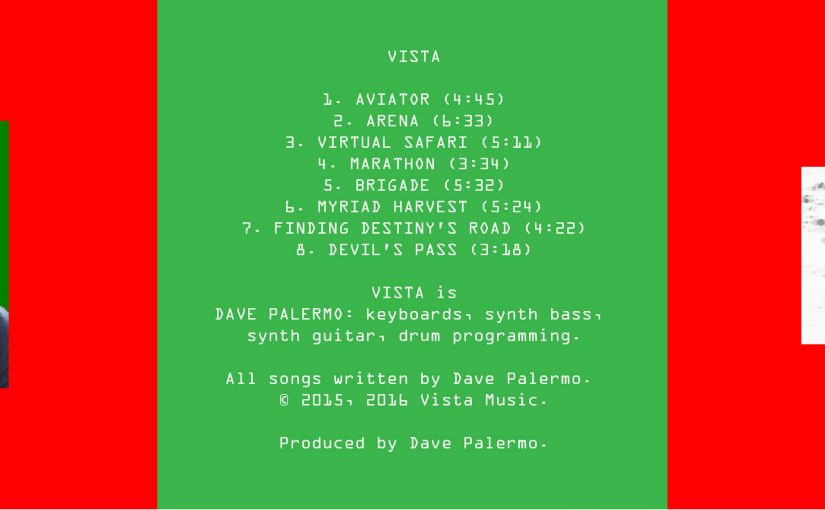 Thanks to modern technology Bedroom Warriors around the world are free to record their music without interference or demands from Labels or Managers. People are free to create, liberally making the music they want to make without compromise, other than the amount of instruments and recording equipment they have. It’s even possible to do it from a digital pad these days, with a studio at your fingertips, you can twiddle virtual knobs to your hearts content, until you are satisfied. Unfortunately it also means there is no quality control.

Dave Palermo hails from Pittsburgh, Pennsylvania. He’s been a musician for many years and has recorded several albums both as a solo artist and with other bands. All songs are written and recorded by Dave and he plays all the instrumentation, keyboards, synth bass, synth guitar, and drum programming .

He named the solo project VISTA  which he sees as a metaphor for his music createability from the dictionary definition: A view, especially an attractive view from a high position. “After a hard climb, we were rewarded by a vista of rolling hills.” He says” “A song and ultimately an album are mountains to climb. An upward journey through the mind to the top where you turn around and look back at something aesthetically pleasing, entertaining, and informative for the listener. This is the goal and the standard for every piece of music I write, so I’ve called this project Vista.”

It’s at this point the PR pack goes on to list influences and the kinship with other bands, though pointing out Vista has its own style and sound, full of unique chord progressions and memorable melodies. Dave also says the new debut album includes 8 tracks of powerful synth rock. Sorry Dave it doesn’t. Though it pains me to say it I cannot agree with these comments and have deliberately not named the bands.

I really don’t know where to start, so let’s begin on the positive. Dave is clearly a competent multi-instrumentalist but I would like to see him stretched to show his full abilities which this album does not seem to do, or I hope it doesn’t. He obviously loves his music and the creative process, the instrumental tunes are nice and inoffensive. There is no growling vocals, blasphemy or swearing to be heard. I would like anyone reading this to bear in mind that these are all merely my opinions and others may well like the eight tunes presented on this album and Dave is free to ignore this review, shun me forever and pretend I don’t exist, but I cannot do this without being honest and true to myself.

I will not use the words ‘powerful’ and ‘rock’ because I at no time want to mislead anyone.

Track 1 – Aviator: Never really takes off for me and floats, drifts around like a brightly coloured balloon in a summer sky slowly deflating as the helium exits through a small pinhole.

Track 2 – Arena: Nothing to do with Clive Nolan, of which I’m sure he’ll be relieved. This is where I expected the excitement, drama and the two previously mentioned words to kick in, but no. Deflating further the balloon doesn’t even receive a kick to boost it and the arena it trails over is an overgrown ruin.

Track 3 – Virtual Safari: The balloon floats across sparse, flat tundra, dodging dried twisted trees and bushes and I want my money back as at no time does the tune create any images of virtual, majestic creatures running freely across the synthesised plains.

Track 4 – Marathon: Not related to the Rush tune of the same name, though the metaphorical balloon does seem to catch a little breeze and gain pace in comparison to the previous tracks but the music doesn’t befit the title as neither very long or epic. Half way through the album though and I am begining to feel I’m running in a marathon. Track 5 – Brigade: As an ex-military man myself I could never have marched to this beat. It doesn’t convey any sense of bombast, pride or action. There could be no chest beating swells of emotion as the only distinguishing thing on this track is a leisurely run up and down the keyboards. This should be enough to shoot further holes into the metaphoric balloon, depleting it’s momentum further. I’m tempted to go AWOL.

Track 6 – Myriad Harvest: A welcome departure into piano like intro on this track holds promise, but it doesn’t last and slips back into the synthesised anaesthesia. The old adage of ‘You reap what you sow’, never rung more true, one careless swing of the instrumental scythe and the balloon could be punctured beyond repair. With a heartbeat drum track this plods like a shire horse pulling a heavy plough.

Track 7 – Finding Destiny’s Road: We all have a destiny, be it in our hands or not and we find signs to guide us along the path. But here, someone’s pinched the road signs and we are left to wander aimlessly following the balloon as it drifts just above the road surface, ribbon trailing on the tarmac. Once again the only distinguishable piece is a few bars of piano like keys in the middle, too little to raise us and we stop suddenly at the end not knowing or particulalry caring where this takes us.

Track 8 – Devil’s Pass: Atmospheric and with a certain gloom, this is the best track, albeit the final one, on the album. It mourns the passing of the balloon as the the last desparate whisps of air are expelled and it lays motionless, done. This could have been good if longer and had built the menace and impetus, but it dies too soon. It also shows a hint of one of the bands Dave claims kinship with, I’ll leave you to guess which band.

In conclusion I have listened to this album four times fully and it has played whilst I write, I will not be listening again. I do not get paid for this and have no hidden agenda, the reviews I do are purely out of love for music. If you find riding in a lift aesthetically pleasing, getting off at the floor housing the library and feel daring at returning your library book a couple of days late, then this is the album for you.

I am proud to know a number of excellent multi-instrumentalists, one of whom I know once entered a popular TV talent competition and ended up probably hearing a similar parting sentence from the judges.