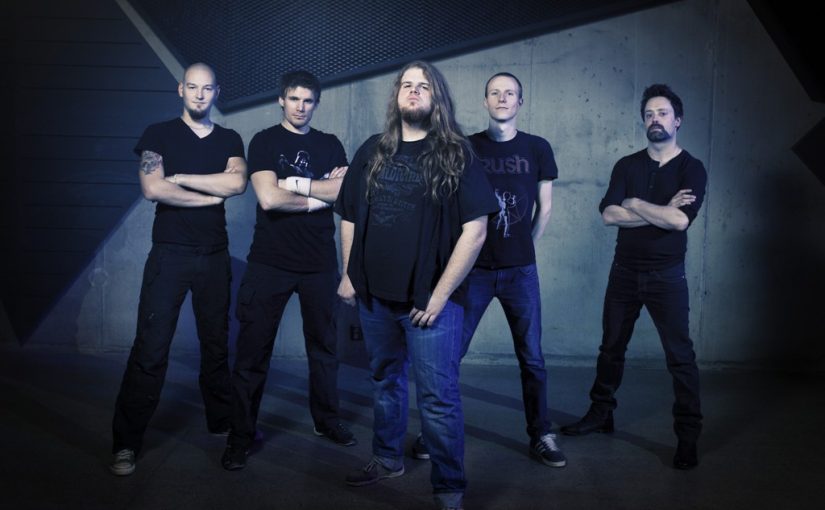 “I have a small inkling that we could be listening to a band that could, if not should, turn out to be a big hit. The way the songs just flow perfectly, the brilliant musicianship and that fantastic voice all deserve success on a major scale. Vicinity stands comparison with any of the new bands out there and would not be awed by the greats. For a first full length album, Awakening is really rather good. I suggest you go out and buy it….now.”

I wrote those words back in October 2013 about Vicinity’s debut release ‘Awakening’ and it wasn’t until I got a message from vocalist Alexander K. Lykke recently that I realised how much time had passed since its release. Isn’t it about time we had a new album from these talented Scandanavians?

Funnily enough, that’s what Alexander was wanting to talk to me about, did I want a promo copy of their new album ‘Recurrence’, due to be released on the 21st of April? Of course I bloody did!!!

Fast forward a few weeks and here is the review… First, a precis of the press release…

The Norwegian progressive metal band Vicinity is back with a follow up to the critically acclaimed album ‘Awakening’ (2013), put on best newcomer lists by several webzines and Norwegian national radio (NRK P3). Their new creation, ‘Recurrence’, is a concept album that debates the cyclic nature of humanity, both as a whole and at more personal levels, while highlighting both the technical- and melodic aspects familiar to the progressive metal genre.

With ‘Recurrence’ the band set out to make an album that would be more than just the sum of its tracks, and envisioned an album where the songs would float into each other. The major theme of the album, lyrically, became: the cyclic nature of the human condition. Within that theme the lyrics explore and challenge topics like dementia and memory, and whether the world might be a better place without what humanity has become.

The band wanted to challenge themselves technically, but always keeping the songs and the album as a whole in focus. The result is an album of six tracks, varying in length from 5 to 22 minutes per song, in the tradition of bands like Circus Maximus, Threshold, Arena and early Dream Theater. So, sounds very promising from the Press Release but let’s get right into the nitty-gritty and form our own opinion shall we?

The Unwritten Manifest gets us off to a cracking start with an excellent, urgent riff and stylish keyboard tone. It’s almost 80’s in its feel before we have a break and we set off on a hell-for-leather prog-metal fest of impressive licks and dynamic, powerful drumming. Alexander’s vocals seem to have got even better, his voice soars and he has no trouble hitting even the highest notes. I’ve been listening to a lot of Ultravox recently and Ivar’s synth playing doesn’t half remind me of Billy Currie and gives an additional dimension to the band’s sound. At times the vocals even venture off into Symphonic Prog territory and Alexander just takes it all in his stride. a pretty impressive opening to the album it must be said! We segue straight into Phoenix and the guitar and keyboard opening does give that feel of something arising, Phoenix-like, from the flames. The technical ability of these guys is second to none and you feel they are really getting into the groove on this track as it flows immediately and perfectly. There’s a compelling and pressing feel to the vocals and a persuasive dynamism to the whole track as it continues to transfix you with its addictive guitar riffing and keyboard runs. You want vocal harmonies, you got them in spades my friend and Pierre-Nicolai’s impressive bass playing drives everything along, aided and abetted by Frode’s weighty drums. A highlight is the superb guitar run from Kim to wards the end, this song comes in at a tad under eleven minutes but it flies by in a haze of singular musical excellence to leave you breathless at the close. So, imagine someone came up to you and said “Write me an archetypal Prog-Metal track with an addictive, soaring chorus, catchy riffs and a dynamic rhythm section and, while you’re at it, throw me in some more intricate, proggy sections…”, humour me here, okay? Then I’m pretty certain that if you came up with Mountainfall they’d class you as the prog-metal version of Diane Warren. Yes, from the first note, this track really is that good, there’s an immediacy to it that never fades, no matter how many times you listen to it (and, trust me, I’ve listened to it a LOT!), it is near prog-metal perfection. It is on this song that Vicinity prove what I’ve been thinking from the first listen to the album, they really have stepped up many leagues and should be classed in the top echelon of acts in this genre. The chorus is an insane earworm, you just will not be able to get it out of your head, Kim lets fly with some incredible guitar playing and Ivar makes the keyboards talk to you in improbable ways. Add in an uber-tight rhythm section and you really couldn’t ask for any more! A relatively short track at five and half minutes, Extinction is a super-cool song that mixes classy riffs and edgy vocals to give it an instancy that sits perfectly alongside another chorus from the Vicinity book of memorable sing-alongs. It moves through your atmosphere at the speed of sound (see what I did there?) dragging you willingly in its wake. The drumming is that intense and hyper that you wonder if Frode had to grow an extra pair of arms to be able to do it but, no, it’s just his innate ability, crikey, these guys can really play! These’s another immediate segue into Immaterial Failure and the prog-metal juggernaut takes a breath with a more laid back introduction. Slow and measured it may be but it’s still mighty imposing. There is a feel that this song is building up to something more monumental and profound. Alexander has a more emotive feel to his vocal delivery and the rest of the band are in absorbing mode, each note resounding in your ears, especially Pierre-Nicolai’s descriptive bass playing. The foot is lifted slightly off the break pedal for a short while to add  a more pressing edge to the song but that moderate, deliberate fundation remains. We are treated to a scintillating solo from Kim-Marius’ fiery guitar and more of that cultured bass playing, these musicians can do restrained just as well as they can rock your socks off. There’s no pause as we make the transition into The Long Goodbye, the longest and weightiest track on the album. A polished introduction consisting of Alexander’s haunting vocal laid over an ethereal piano note mesmerises you before a wistful guitar takes up the mantle. The blue touch paper is then lit and the energetic drums join a compelling, staccato guitar to drive things along, Prog-Metal epic? yep, here we go! Vicinity may have been influenced by early Dream Theater, Circus Maximus and the like but they are creating their own signature sound which is wholly evident on this intense, superb track. High notes are hit with precision on the vocals, the riffs almost have a life of their own and the bass and drums have a vibrancy that is electric to hear and feel. It’s almost as if this song compresses time, it may be over twenty-two minutes long but never outstays its welcome as its gravitational pull draws you in and doesn’t let go. Trust me, you will find yourself reaching out for the volume control to ramp it right up and your neck will ache from all the nodding along to the beat you will be doing. Vicinity can do intricate and complex as well as anybody but it is there for a reason, not just for showing off, there is a section towards the middle of the track where this is very apparent. This song, like the rest of the album, is a very absorbing listen as little nuances makes themselves known with repeated listens, giving the listener an insight into the music and the ethos of the band. So, I’ve come to the end of the album, what do I do now? Well, like a fantastic drive down an incredible road, there is only one thing to do, turn round and do it all again, just press play…

It may have been three and a half years but the wait for a new Vicinity album has been well worth it. A slice of Prog-metal brilliance which you want to return to again and again, ‘Recurrence’ is a great achievement and shows that this band have now become a force to be reckoned with in the genre. Chock full of addictive earworms and musicianship from another planet, it should be on everyone’s wishlist!