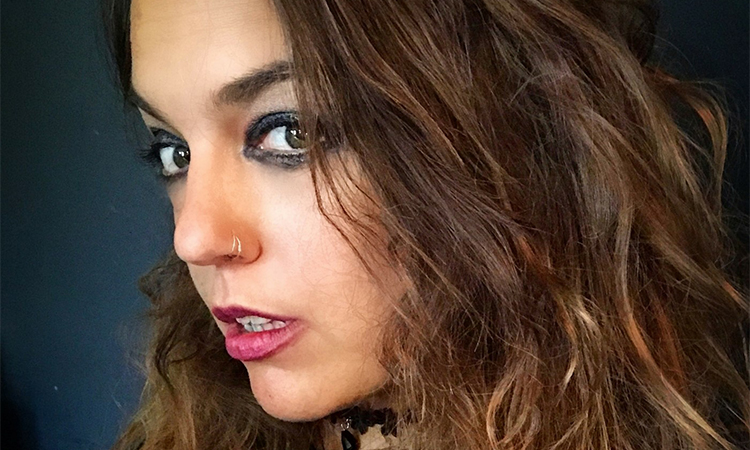 That Clive Nolan chappie, not only being an integral part of Pendragon, founder member of Arena as well as driving force behind lots of different musical projects over the years, he also knows his onions when it comes to find new talents. When he branched out into his musical theatre company he brought his knack for a tune and talent for bringing on new voices to the stage with him.

Verity is one such talent, you might have seen her performances in several of Clive’s Caamora project productions including ‘Alchemy’ (which is where I first saw and met Verity at a CRS awards night several years ago) and she is one hell of a vocalist. If you missed her on those performances then you will have seen her with Pendragon on their ‘Masquerade Overture’ 20th anniversary tour (as an aside that makes me feel old, I remember when ‘Masquerade Overture’ was brand spanking new) where she fitted in like she’d always been there.

Now, as the title of her debut solo album indicates, Verity is ‘Breaking Out’, and blimey she does it in style.

Following on from a few teaser singles last year, ‘Breaking Out‘ see’s Verity stepping from under the wings of her mentors and putting herself firmly in the spotlight.

As a performer and vocalist Verity is not backwards in coming forwards, and this album is chock full of full on rock songs that demonstrate her voice and range in style, and nothing here feels forced or fake, with her husband Alex on guitar and production duties this is a real family affair, and, as I’ve said before and will say again, couples that play together have a connection far deeper than ordinary bandmates, as they connect on both an emotional and musical level. This for me adds far more to the music as it brings something more out into, and this gives the album a lot of soul and power, and Alex is also one hell of a guitarist.

The 10 tracks on here are all fantastically written and produced, and are designed to showcase the power and versatility of Veritys vocals, from her full on rock power on tracks like the raucous I Don’t Care, about a lairy mad night out (I somehow get the feeling from this track that verity would a: Drink you under the table and b: end up dancing on said table at the end of the night) whilst the opening title track is a tour de force in putting her vocals centre stage, and sets the tempo for the rest of the album with it’s blues riffs, funky piano break and soulful vocals.

Zeros and Ones has some great synth work and a softer vocal approach from Verity, Demons In Your Head is an emotionally honestly charged song about struggles with mental health and again there’s softer vocals on the reflective and introspective See Through with more emotionally honest lyrics. These songs show that Verity has a lot of heart and soul and wears both on her sleeve.

More of those sublime synths drive Face It and it shimmers and has another of those amazing guitar hooks that are scattered over this album like rice at a wedding and with its sheen and funk could strut it’s way onto any radio play list. This is a fantastic driving album, stereo on loud, open road and an excellent soundtrack. Exhale mixes the ethereal with the rocky side as Verity puts her voice through it’s paces, it’s dynamic range and power makes this performance a tour de force and reaffirms that she is at the top of her game, & arguably one of the female vocalists of her generation.

Slow Fall is a great piano driven rocker with some great musical interplay and more of Verity’s wonderful vocals. The whole album covers the human experience perfectly and is full of radio friendly rock songs. The music on here is all sublimely produced and performed and there are some wonderful musical moments on here that get the toes tapping from start to finish.

Verity White is someone who has added so much as a vocalist and performer within any ensemble that she has performed with, and on this confident debut full of charm and power she juxtaposes real rock swagger with emotional vulnerability and proves that she is a star in her own right.

‘Breaking Out’ is an apt title, as this see’s Verity stamping her mark all over the music scene and showing that she is a name to watch.

This is an essential album and one hell of a debut. I can’t wait to catch Verity on tour in January.

Order ‘Breaking Out’ from bandcamp here