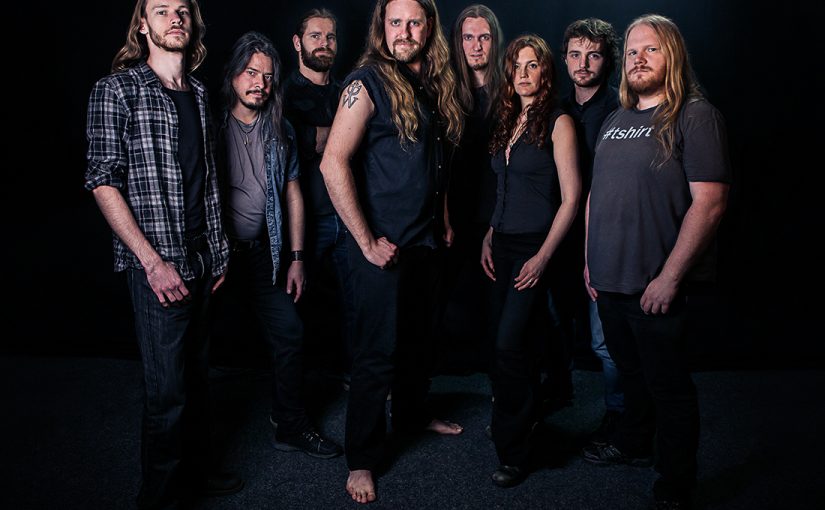 “If you’re waiting until you feel talented enough to make it, you’ll never make it.”
― Criss Jami, Healology

There’s a very old and very wise saying that goes something along the lines of, “If you’re good enough then you’re old enough..”, don’t let other’s perceived conception of your youth hold back your talent. This can be applied in many walks of life and music is definitely one of them.

Tom De Wit may literally have just turned 30 years of age but this man already has a huge array of talents in creating and producing music and I’m always waiting with much anticipation to see what he comes up with next.

So when the CD & press release arrived for his latest project with TDW & Dreamwalkers Inc. I couldn’t wait to immerse myself into it completely…

“After three years of self-discovery and hard musical labour, the next chapter in the musical story of TDW has arrived. ‘The Antithetic Affiliation’ is here and it’s become an album of extremes.

After garnering success in the international (prog) metal scene for his 2014 album “Music To Stand Around And Feel Awkward To”, Tom de Wit (TDW’s main driving force) got back into writing mode. The original idea was to create a new release that would be different from his last album in stylistic sense but also lyrically and theme-wise. This album would become something of a sketchbook of emotional states of being that Tom had been witnessing the last few years.

The very first song that was written and completed was the 20 minute epic Lest We Forget which shows a new darker and more angry side of the TDW music. Combined with shorter songs like Dirge & Lovesong and the epics Monolith and The More We Remember, the album got into its final shape. With all these songs combined, the album had a structure and a flow that makes it one big experience that searches for the outer reaches of emotions and music in general.

The infinity symbol is crucial to the theme that lies in this album as the human life pattern never stops in terms of positive and negative experiences. As long as a person lives and feels, the cycle will continue.

With the ‘Cynic’ and the ‘Idealist’ playing the main roles in this album’s concept, one can see that these discs are both different in style and tone, but they form a unity as a whole. Forging the anithetic affiliation that is noted in the title. ‘The Idealist’ being a more melodic and symphonic orientated disc and ‘The Cynic’ being a more dark, brooding and metallic affair. This showcases both sides of the emotional spectrum within the music of TDW in a new way.

Once again joining Tom in this album, is a wide variety of guest musicians that all bring their flavour to the mix by adding solo’s and specific parts on the already existing music. But the most noticeable change is the inclusion of the brand new live-band Dreamwalkers Inc in the recording process. This band was formed to perform the TDW music live on stages and since their acoustic debut gig taking place at Progpower 2016, this band of people have worked with Tom to finish this TDW album and to put their own stamp on this material as well.” The first song on The Idealist disc is the powerfully emotive epic The More We Remember which builds up from a low key start with some beautiful oboe from Nienke van der Kamp before a striking riff breaks out and gives the song more impetus in a symphonic metal style. This track ebbs and flows with some pretty impressive guitar playing and incredibly catchy riffs and the drums are pretty dynamic too. Tom’s stentorian voice provides a big vocal backdrop while he also takes things lower and more gentle too, showcasing his wide ranging voice. This is some stylish progressive metal with a fast paced tempo that interchanges with the moderate sections. There’s some virulent, mind bending guitar solos thrown in the mix by Bob Wijtsma that add a shot of musical caffeine among the dreamlike sections. It’s a song of many interesting juxtapositions, none more so than the addition of Radina Dimcheva’s vocals as a stylish counterpoint to Tom’s more aggressive, masculine intonation. I’m a big fan of Tom’s music and he has really crafted something exciting here, like a fantasy novel set to heavy progressive-metal music.

Anthem starts with a thunderous riff and dominant drums with some suitably swirling keyboards driving things along. A dark, gruff vocal precedes the energetic vocals which lead up to a suitably bombastic chorus, yes a true ‘anthem’ indeed. The female vocals that complement Tom’s give a true symphonic metal edge to the track, it’s nothing new but it is done extremely well and I just can’t get enough of that really memorable chorus. There’s a huge wall of sound being created by these impressive musicians using incredible technical skill and melodic brutality, the screaming guitar solos being just one example along with Sophie Zaaijer’s violins and viola, it’s one hell of a ride and a thoroughly enjoyable one at that!

There’s a whole lot more of a relaxed feeling to Lovesong, a stylishly chilled affair of restrained vocals and guitar that just seems to float across your synapses leaving a trail of relaxation as it passes by. A wistful, almost nostalgic song that shows the great variety inherent in Tom’s song writing. He can create huge, powerful soundscapes but also music that touches you in your heart and soul and it’s the subdued and tasteful side of his personality that is on show here.

We close The Idealist with Monolith -The Ascent, a brooding and intelligent track that gets you thinking. I really like the way it builds up the suspense with some really creative music and Tom’s questing vocal. It almost has a magical air to it before it begins to evolve into something much more dominant and compelling. The edgy riffs and precise drumming add structure to the organised chaos of this true progressive metal track that’s awash with a real sci-fi aura, this is what I’ve come to expect from Tom and the impressive group of musicians he always brings together. So, on to the second disc, The Cynic and we open with Monolith – The Descent. It’s said that this disc is more dark, brooding and metallic and it most certainly is, this track opening with a monstrous riff and choral voices before powering on with a mixture of resounding drums and weighty guitars. The vocals are properly metallic with some gruff style shenanigans thrown in too but they work well with the feel of this forceful song. It’s verging on heavy metal with a progressive twist and could seriously crumble mountains into little bits of gravel with its all-encompassing soundscape. If ever you needed a musical hangover cure then put this track on at a high volume and it will blow any cobwebs away with its relentless sonorous attack. Don’t let the little interjection of a quieter section that closes out the song fool you into a false sense of security, this is monumental metal at its best.

The next track Aphrodisia opens with a thoughtful tone, laid back, heartfelt vocals giving real pathos to the song. A world weary timbre enters Tom’s vocals and Martine Mussies’ cello provides succour. That feeling doesn’t last though as the track blows apart into a thrashing metal monster with energetic speed guitars and tirelessly animated drums. There’s barely controlled chaos erupting among the chord sequences here and it’s utterly enthralling, add in the keyboards that almost have a life of their own and it’s almost as if the song has come to life all on its own. The coruscating guitar solos from Dave Mola add to that almost alien feel with their vehemence and individuality. It’s a peculiar kind of prog thrash metal in places but one that has a keen perception at its heart, evident in the quite haunting close out to what has been a literally breath taking piece of music.

The shortest track on the whole album at just over 5 minutes, Dirge lives up to its name. A slow, almost funereal tempo and Tom’s hushed vocal over a calm guitar note give it a respectful overtone and Cailyn Erlandsson’s beautiful vocal, added to more of Martine Mussies’ cello adds an ethereal overtone of otherworldliness. A sombre and reflective song that leaves you in a melancholy and thoughtful frame of mind.

We finish this immersive musical journey with the riotous prog-metal epic that is Lest We Forget, a track that is on the front foot from the off and never lets up. The staccato, aggressive riff gets right under your skin and is matched by the relentless pugnacity of the drums. Tom’s vocal is demanding and in your face, it’s almost like Metallica on steroids having a jam with Dream Theater turned up to 11, especially on the primeval riffing. Take your pick on the solos, they are all incandescent and rather excellent and provided by Tommy Talamanca, Mendel bij de Leij and Frank Schiphorst and add even more flare to what is already a huge behemoth of a metal song. I’m not a huge fan of demonic vocals but Sascha Blach actually adds something hair raising to the song with his. This song is massive rollercoaster of a musical experience and one which rarely lets you stand still and then not for long. Just when you think you’ve got the hang of it, Tom goes off in a different musical direction but it doesn’t take long to catch up again, just hold on for your life and enjoy the ride as you roll along lifted up by the ferocious riffing. This song is twenty minutes of pure musical theatre as Sacha’s growling character delivers another monologue punctuated by a savagely potent guitar solo and then the riff fest fires off into the distance again only to be held back by a calm and collected acoustic guitar accompanied by Tom’s composed vocal. The music never lets up in its brilliance and diversity, who’d expect Thomas Cochrane’s almost Mariachi like trumpet and trombone to appear in the middle of this rollicking metal beast? Not me but it works and it works really well. Anyway, I’m going kick back and just enjoy the last two minutes of the song as it closes out in a magnificently ebullient fashion.

I’ve always been a fan of Tom’s music and his endless desire to re-invent himself and create something new. ‘The Antithetic Affiliation’ is his most ambitious work to date and he certainly doesn’t hold anything back. Intelligent songwriting and superb musicianship delivered by a talented cast has made this a musical experience that won’t be forgotten anytime soon. To be fair, you need a few listens to really appreciate this lengthy musical work and, no, it’s not perfect but it’s as close to a progressive-metal masterpiece as you are likely to hear anytime soon.