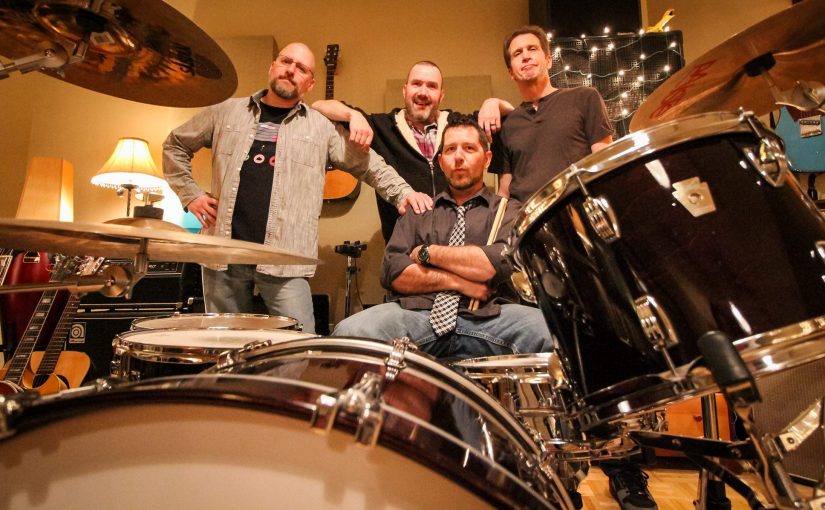 When first hearing about Valdez, a new band based in Philadephia, featuring Simon Godfrey (ex-Tinyfish and Shineback) and Echolyn bassist, Tom Hyatt, I made some initially lazy assumptions about it’s probable sound. I was wrong. Please check in your assumptions at the door because this is an album a long way away from Echolyn or Tinyfish. Simon Godfrey moved to America in 2014 when he married an American, and his personal journey has further stretched his musical horizons in an already wide ranging career encompassing Prog rock, acoustic songs and the electronically drenched unique rock of Shineback. When he met Tom Hyatt in Philadelphia they immediately hit it off and started jamming, then deciding to form Valdez (the name taken from a former band of keyboardist Joe Cardillo from the 1970’s.) Teaming up with the excellent electric keyboardist from Cool Blue, Cardillo, and drummer Scott Miller, Godfrey and Hyatt have produced with Valdez an eclectic and warm album, lovingly steeped in the sounds and textures of classic instruments.

The range of different styles is interesting but one thread that goes through them all is the sense of a solid, well written song. These are not sonic soundscapes of epic proportions, rather vignettes in engaging songs of sometimes wry observations of life around them. This is perhaps most acutely demonstrated in Thirteen, a song which opens with a subtle reference to the opening lines of George Orwell’s ‘1984’ in which in early April the clocks ‘struck thirteen’. The song gives us pithy observations about how our societies have come to be in their current political messes, and this is all served up in waves of ‘bubblegum pop’ as Godfrey has described it. There’s a real 70’s vibe to this catchy song with excellent electric piano, reminiscent of Billy Joel. Godfrey has explained the thinking behind the band as having a real focus on the song, whether  ‘it’s a short song, a long song or a mad, complex one. As long as it’s good we’ll grab it with both hands and spin it until we’re dizzy’, which very much comes over, especially in Thirteen. Similarly, opening song Black Eyed Susans chimes in with all the swagger and attitude of a Joe Jackson song, which is a GOOD thing!

The diversity and skill of Valdez is exemplified by the melancholic and evocative take on dementia in Sally Won’t Remember. This emotional but not mawkish song successfully conveys the debilitating slowness and sheer psychological effort associated with caring for someone with dementia. Like Godfrey this listener has experienced the sad decline of a parent with dementia, and this song echoes those feelings, but even in their dementia strangely our parents indirectly teach us about life and caring.

The stand out track on the album is the title track This, which apparently refers to ‘the world of wonder right in front of us which we forget, simply because we see it every day’. Opening intriguingly with the sound of a wurlitzer and a chiming piano, it then rises like a sun as acoustic guitar and percussion join in to then be filled out with bass and keyboards… and then it settles back in to the song with Godfrey’s distinctive and emotive voice leading us to a swelling killer chorus. This lovely song rolls along memorably and then takes a breath before a pulsing bass introduces us to a resonant final section with great multi-layered harmony vocals as it rises to a crescendo. In some ways this listener would have liked to hear a few more songs of this nature, but only because it was so bloody good! No Stone Unturned is a more bluesy number, Godfrey sounds like George Michael vocally at times (which is no bad thing), but the real star of this number is the excellent keyboard work of Cardillo. Godfrey has shared that the whole band really thinks that the majority of the best music came out of the instruments made famous in the 60’s and 70’s. Consequently they have used a range of classic keyboards, such as the Wurlitzer, Fender Rhodes, upright pianos, classic acoustic and electric guitars, recorded through old amps, and this is particularly evident on the warm, lush, atmospheric sounds of No Stone Unturned and Little Keys. Not every song works for this reviewer (take a bow Spite House) but this is an engaging album that will draw you in. On ‘This’, there is a real sense of looking back affectionately but not slavishly to the past, as evoked by Mark Buckingham’s striking artwork of a 1950’s style woman swinging on a balloon. This is an album of fairly stripped back but well played and constructed songs. Godfrey has also shared that this album, produced by Hyatt’s legendary band mate in Echolyn, Brett Kull, was recorded without sequencing and as miked up to make it as live as possible. Such loving attention to vintage recording techniques combined with classic equipment clearly  influenced the whole atmosphere of the album, and it particularly pays off in the strong final duo of segued songs, Colorado and Smile for the Camera. Colorado, written by Cardillo, has an enchanting rolling and melodic intro and evokes the free open space of that state, with some beautiful bass by Hyatt. An ambient, feedbacking interlude connects us to the beguiling Smile for the Camera, which floats in with a delicately picked acoustic guitar, with echoes of classic Supertramp’s heyday. This extended song takes a jazzier turn with peculiar sounds and a twisting synth solo… it seems that Godfrey and Hyatt couldn’t quite contain all their ‘Proggier’ impulses for a whole album! However, this is a brief diversion before this piece takes another turn into the beautiful blissed out harmony vocals reminiscent of Crosby, Stills and Nash, possibly with the help of Kull who added vocals and guitar alongside his production duties. Nevertheless, ultimately this is a Valdez song because the song then concludes eerily and possibly a little darkly with the last line ‘Smile for the Camera’ .

Valdez have created an interesting album, which crosses various genres and combines the myriad talents of the band in an engaging mix of sounds and songs. It’s not particularly ground-breaking or innovative, and was never intended to be so – but if you’re looking for some well written and well performed songs in classic style  with warmth, with and spirit ‘This’ could be it!

Order ‘This’ in the UK, Europe & ROW (excluding USA) from Bandcamp here

Order ‘This’ in the USA from bandcamp here