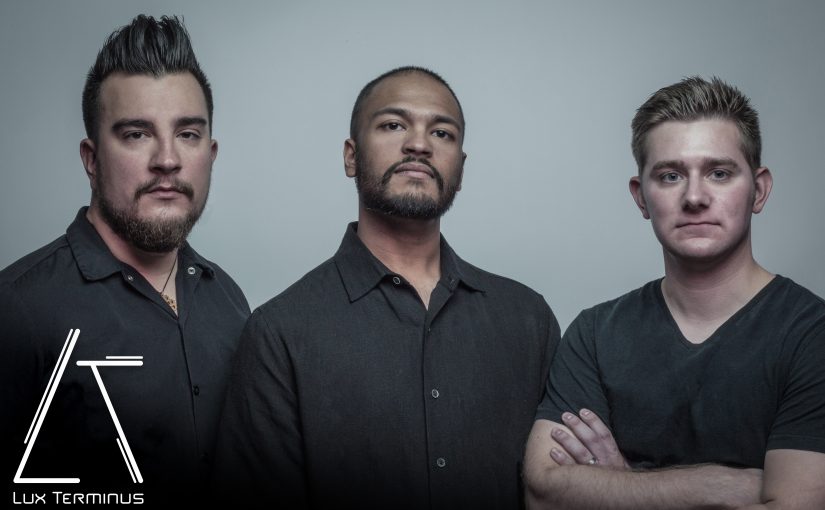 “The best and most beautiful things in the world cannot be seen or even touched, they must be felt with the heart.” – Helen Keller.

To a music mad amateur journalist like me, that statement applies to music just as much as anything else, if not more! When I hear an inspirational new piece of music for the first time, it can really hit me right in the heart and send it soaring with its beauty.

Let’s be honest, we reviewers listen to so much music that it is easy to become jaded and we could say that it would take something very special indeed to inspire us compared to the man (or woman) in the street. That could just be pretentious tosh but, recently, a new album landed in the inbox that really fits what I’m trying to say to a tee. Let me tell you more… Lux Terminus (translated as “the light at the end”) was formed in 2016 by three musicians with a shared vision to create unique and powerful instrumental music. Their debut release ‘The Courage to Be’ is a powerful first statement from the progressive rock trio,which consists of keyboardist Vikram Shankar (Redemption), drummer Matthew Kerschner, and bass guitarist Brian Craft.

Put simply, ‘The Courage To Be’ is a groundbreaking instrumental release that takes themes of separation, hardship, hope and transcendence and turns them into an instrumental masterpiece. The incredible keyboard skills of Vikram Shankar are at the forefront of this superbly involving sixty-one minutes of pure musical theatre and that is not belittling the skilled contributions of Kerschner and Craft whose rhythm section adds pure virtuoso drive and impulse.

From the elegantly gentle Prologue: Departure (I), which is part one of a four part thematical musical suite, through the infectious driving grooves of Elctrocommunion, this skillful trio deliver unique and powerful instrumental tracks that just make your heart sing.

There’s intricate and convoluted (Aberration), jazz-funk at its best (Miles Away) and progressive metal, rock, jazz fusion, electronic, and cinematic influences galore, all of which contribute to a dominant first statement from these excellent musicians.

Every track is worthy of praise but the real stand out piece for me is the twenty-one minute orchestrally driven brilliance of the title track featuring Timo Somers. Described as ‘high octane jazz-fusion’, it will literally send your aural receptors into melt down as it ebbs and flows to a manically intense rhythm. I really feel that the band are having as much fun as you can legally have on this track and it’s worth the price of entry alone!

You want your keyboard based progressive instrumental with a more laid back and moody feel? Take Journey (II), Spectral Shapes or The Road Home (III) and the stylish piano and keyboard that adorn them, this album has it all.

To finish, the sultry vocals of Anneke Van Giersbergen grace the lovely Epilogue: Fly (IV), the closing part of our four part suite, a heartwrenchingly beautiful four minutes of pared back delight and a perfect way to close the album out and bring your heart rate back to normal.