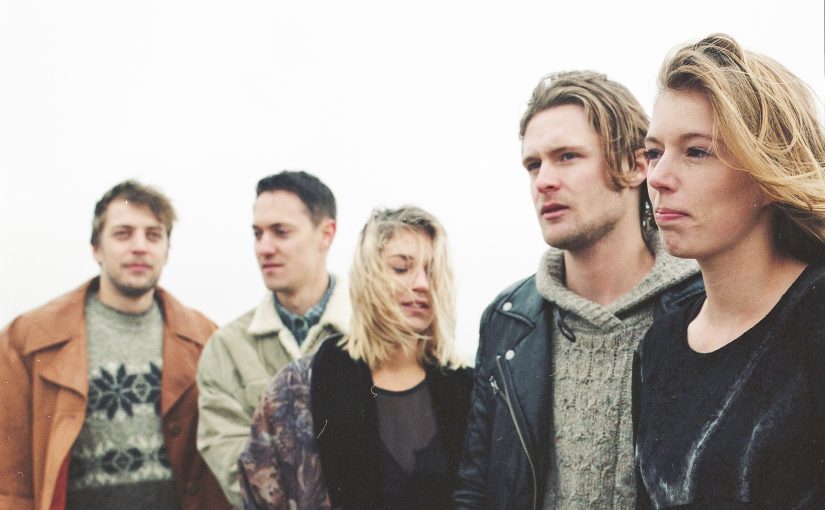 A few years ago I saw a band on tour with the Darkness called Do Me Bad Things, my brother, who is almost as good at finding music that I like as David Elliott recommended them to me. Their USP was 5 different vocalists, mixing a trio of female vocalists with soul and a metal vocalist from the ‘tramp shouting in a dustbin’ persuasion, they were so good and their musical range was so diverse it inspired me to buy the album.

After one album they disappeared without a trace, leaving one great album and bags of potential. I mention them now because listening to ‘Collision’, the debut album by the insanely talented Dutch band Golden Caves (out on Freia and distributed over in the UK by those nice chaps at Bad Elephant) remind me of Do Me Bad Things, if not musically then vocally, and the kicker here is that instead of needing three killer female vocalists, they have just the one, the soulful and versatile Romy Ouwerkerk whose stunning work throughout this album brings these 9 songs to life.

Formed in 2013 at the Dutch University Codarts in Rotterdam, they have been building a huge following at home, and with songs as great as this on an album that’s been honed to perfection over the past 4 years, you can see why. Proving that the future of contemporary prog is very much in the hands of the youth (like the UK’s Maschine, or Saul Blease) they take the template and have crafted 9 well written and performed prog songs, with no room for lengthy epics or deviations, none of these songs get much over the 5 minutes mark, proving that sometimes less is more.

This 5 piece band have instead of filling a CD because they can, have put their heart and soul into this record, with the songs leaving you wanting more instead of thinking ‘is it over yet?’ and includes reworkings of their singles, the superb My Demons Hunt, and the simply sublime Bring me to the Water. When they slot together with tracks like Doctor’s Prescription, Mother and the excellent closing When the Rain Falls, you know that this is a band who have a lot to say musically and have the confidence and skills to bring it off.

There is a great mixture of heavier guitar from Alex Ouwehand, whilst the keyboard work from Elise Polman shines throughout, and the anchors of the band Erik Stein on drums and Tim Wensick on bass allows the fluidity of the guitar and keyboards to take off. As I mentioned earlier it’s Romy on the vocals that is the real revelation, soulful, rocky and on all tracks highly emotive, she is another of the new generation of progressive female vocals like Verity White or Kim Seviour who has an instantly recognisable voice, and who is firmly putting the case that contemporary prog is as much a females game as any other genre. This is a mature and striking debut album from a supremely talented young band, who, based on the skills shown here and the maturity on this record, have a lot more to give, and are more than capable of making a massive impact.

If you’d not guessed so far I love this record and would put it down as the debut album of the year so far.

Buy ‘Collision’ in the EU from FREIA Music