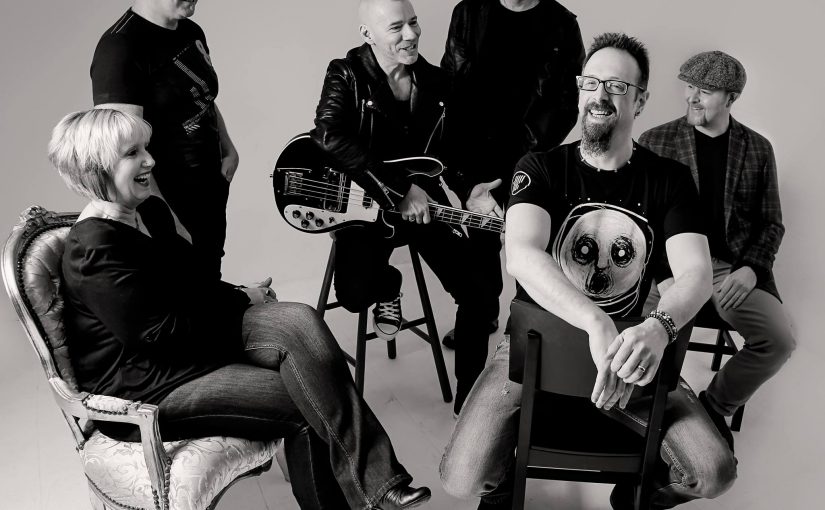 Back in the day when I was more heavily involved in helping at gigs and on merch desks for the CRS than I am now (and we’re talking not quite 20 years ago) I had the pleasure of seeing some amazing bands at the HLC in Rotherham, during what some regard as the golden era of the old CRS. I watched bands like Mostly Autumn, Karnataka, Arena, Threshold, among many others (all of whom are now household names across this mighty span of genre that we cover here at Progradar) make their first tentative steps into the spotlight, some more successfully than others. Some became instant favourites but some took time to bed in.

Now, other than the mighty Jump, there was only one band who never played the same set twice and brought bags of charm and charisma to the stage, and who presided over some of my favourite CRS gigs over the years that I was attending either as staff or simply Johnny Punter.

That band of course is Strangefish, those Mancunian scamps who used to pop over the border on a regular basis, not just as ‘the turn’ but also as members of the audience. These guys didn’t just play prog, they were immersed in the scene, loving the music they were playing and the bands who weren’t them.

After releasing one EP and two albums, the last of which, ‘Fortune Telling’, was their masterpiece, a full blown and fantastic concept album, they took an extended holiday. Drifting off a scene that they had illuminated and blown away with their musical presence, wallflowers they weren’t, and yet once they’d reeled us in, they were gone. Always leave ‘em wanting more it seemed.

Now, only a mere 12 years after their last album, they return, with an enhanced line up, and a brand-new slice of sound, ‘The Spotlight Effect’.

The core band, charismatic vocalist Steve Taylor, Paul O’Neill on keys, Bob on guitars and Dave Whittaker on drums, welcome new members Carl Howard on bass and Jo Whittaker on vocals, (and having seen this line-up at their debut gig a few years ago, I can confirm they are a mighty powerful musical combination) this is Strangefish reborn.

The break seems to have done them the world of good and, on the surprising opener, the acoustic Death of Common Sense, the well observed and intelligent lyrics are back yet the sonic palette is expanded. It might seem brave opening an album with an atypical song and a new sound for them, but this is the confidence of a band who know they’ve still got it and have a renewed sense of purpose.

Progress in Reverse is a scathing look at where we are now over an amazing musical piece, really jumping out on you after the opener. This is more familiar territory but with that subtly harder edge and deeper sound, this is a real boot you up the bum moment.

As the title of the album (and its subtitle – the phenomenon in which people tend to believe they are being noticed more than they actually are) suggests, it’s overriding themes are over exposure and the fact that anyone can be a celebrity by being online. Topics which the wonderful, and heavier edged, Iconacon (what a fantastic title) tackles with some skill and aplomb, Bob rocking out with the best of them and the band musically on top form, trading licks and riffs and vocals.

There’s also loss felt on this album, the lovely Summer Slips Away is a hauntingly beautiful poignant ballad where the understated guitar work of Bob and Paul’s gentle keyboards allow Steve and Jo’s wonderful duet to shine. The two voices work perfectly, it’s amazing the impact a second vocalist has on the band’s sound.

Strangefish have always been fond of their epics and well known for their effervescent stage presence and fun-loving attitude. There’s been serious undercurrents from tracks like Ignorance of Bliss of ‘Fortune Telling’ and, of course, they are no strangers to epic work outs that give them room to breathe and build and here is no exception.

The centrepiece of the album is the three-parter Delicate, consisting of 1: Now is not the time, 2: Half the Battle and3: The Light at the other side. This is a full-blown epic, looking at the struggle of life, the human condition and reaching out for help. There is so much going on here that I could spend the whole review analysing it however, the nature of the subject matter and the nuances and, indeed, resonance it will have with you is dependant on your perspectives and experiences, so I will leave it for you to decipher emotionally. I will say that Steve has never sounded better on vocals, particularly about 12 minutes in on the Half the battle section, before the motive spoken word part and then Bob’s guitar and Paul’s keyboard kicks in, it is heart wrenching.

The part where Jo’s vocals kick in after Paul’s sublime subdued keyboards and leads us into the Light at the other side, followed by Steve returning with a haunting counter melody, is the sound of 2018 Strangefish. Two powerful vocalists pushing each other on and giving the song such emotional depth and resonance.

Title track The Spotlight Effect features some great heavy guitar and bass work, the addition of Carl has ever so subtly brought the heavier and darker sound of the bands music out, with Bob and Dave sounding like they are enjoying themselves, riffing away whilst Paul’s keyboard work sparkles.

The instrumental Reverse Switch does that sneaky prog trick of revisiting Progress in Reverse, leading into the album closer, the rousing and stirring Up toYou. This has the closest sound to ‘old’ Strangefish as anything on here, with it’s big chorus and optimistic message, it finishes this cracking album with a positive and funky vibe.

Bands reforming after a break with new members can either give us a ‘90125’ or a ‘Calling All Stations’. Fortunately, this album is the follow up that ‘Fortune Telling’ deserved and is Strangefish’s strongest album to date. After having had that break, I think we can now put Strangefish back where they belong.

Next time when you look in the dictionary under the phrase ‘Comeback’ you will see a picture of this album.

Contact the band at sales@strangefish.co.uk to get a copy of the CD