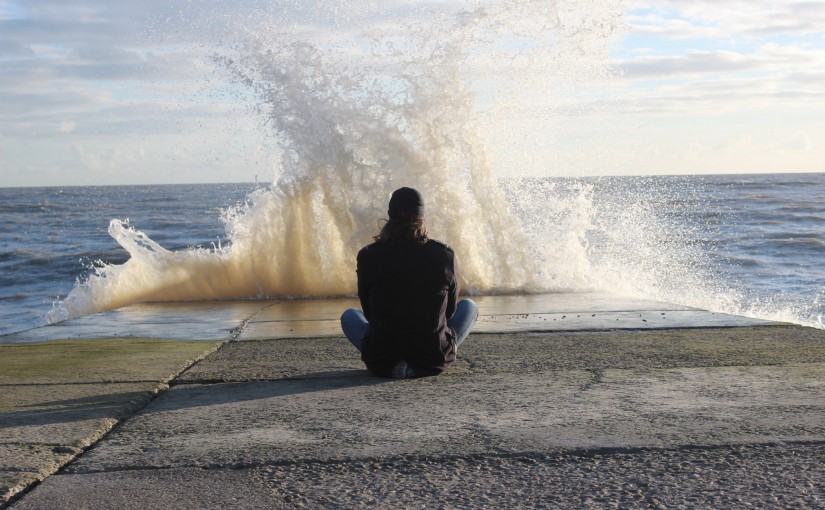 The one man, mighty music machine that is John Bassett returns with a new album from his Arcade Messiah project. ‘The Host’, released on September 17th, was mooted as a return to the angrier, heavier sound of John’s original, and best known, band, the imaginatively monikered KingBathmat and we have been given what we were promised… in spades…

John himself said that the new album was, “…more like KingBathmat ‘Overcoming the Monster’ than previous Arcade Messiah albums.”

That was nectar to my ears as I was, and still am, a big fan of the stoner/doom/psychedelic ‘turned up to 11’ sound of KingBathmat. The music sounded like it was hewn out of solid granite and ‘The Host’ certainly has that monolithic sound deep at its core but there’s also subtlety and not a little wistful, thought provoking going on in and amongst the usual huge wave of sound that John always seems to create. A wave of sound so monumental that it would have Phil Spector running for cover!

Also there has to be a big shout out for the ever excellent artwork on the album, a feature of every Arcade Messiah release, I’m always a sucker for a great album cover.

The first two tracks on the album are powerful, magnetic behemoths, Can Of Worms and Electro Magnetic Divine both anchored on that hard hitting, grunge heavy guitar sound (one that any 70’s seminal metal band would be proud of) that is archetypical of the John Bassett sound, his urgent, edgy vocal adding further dynamism and efficacy to the songs. They move forward like an unstoppable force, inexorably heading wherever it is they want to go.

Hidden more in the background on the latter track is a rather elegant, 80’s inspired, keyboard sound and this comes to the fore on Show Me The Sun, a track more akin to John’s Sacred Ape project with its spooky, sci-fi inspired tone. Full on, in your face, heavy metal guitar returns on the intro to The Witch From The West, a compelling track that has opposing facets of a calmer, more reflective sound that is ying to the yang of that glacial inevitability of the heavier guitar and it’s a fascinating listening experience that draws you in to this musical juxtaposition of good and evil.

Title track The Host goes all techno and electronic on us again with a more laid back sound before opening up with some rather splendid guitar riffs and a mysterious undertone. John’s songwriting is as impressive as ever as each track lays its interesting tale before us, drawing you into a heavy, almost dystopian soundscape. Diagnosis is yet another fine song that takes John’s excellent guitar riffs and runs with them, if Ennio Morricone did stoner, doom rock Western movie soundtracks, this could well be one of them (trust me, it’s not as tenuous a link as it sounds!). I love the potent energy at the heart of this track, it is one of my favourites on the album.

The album closes with two shorter tracks, the haunting instrumental Wasteland, with its bleak, edgy guitar note and and austere, pared back feel (again, this could be a movie soundtrack but more in the Mariachi style methinks?) which then segues into the laid back, wistful nostalgia of Wildfire, quite a melancholy and reflective end to an album chock full of thunderous riffs and a primeval energy.

Well, Mr Bassett has only gone and done it again. I have no idea if it is a coincidence of his move to Ireland but this highly impressive songwriter and musician just keeps getting better and better. ‘The Host’, full of some of the most impressive riffs you will ever hear this side of Black Sabbath or Elder and yet containing moments of lucidity creating pathos and poignancy, is without a doubt, his best musical creation yet.

Order ‘The Host’ from bandcamp here: