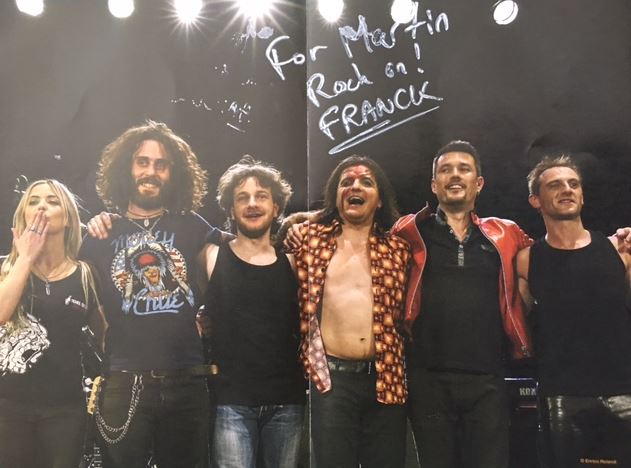 Music was always intended to be heard live, that’s how it started. There were no recording devices when the first minstrels and troubadours travelled far and wide singing their stories of incredible deeds and perhaps slightly embellishing them. It was passed by word of mouth and would be centuries before waxed discs, vinyl records, compact discs and digital files were even thought of.

Therefore, to me, live music is music in its natural form and the energy of a live gig has to felt to be believed. I suppose the next best thing to being there is to watch a good quality recording of that concert or show and I think that is why live DVDs and Blu-rays are as popular as they are nowadays.

I saw The Franck Carducci Band live at the Masquerade Festival last December and they were fantastic, a live experience like no other in fact and I’d had chats with Franck about him releasing a live DVD which finally came to fruition with the ‘Tearing The Tour Apart’ live DVD that was released towards the end of 2016 and which Franck graciously gave me a copy to review.

The live DVD was recorded at the Climax Club Legend in November 2015 and features tracks from Franck’s first two albums ‘Oddity’ (2011) and ‘Torn Apart’ (2015).

The fantastic entertainment begins with an utterly stunning version of the crowd favourite Torn Apart. Franck has always stated his appreciation of the visual art form and you are plunged straight into brilliant musical theatre with a stunning light show and incredible music. The camera work is exemplary and you really feel as if you’ve been transported right into the concert, especially with the close ups of each musician. The high energy blues/rock work out of the track comes across perfectly, you feel the fierce passion of the guitar solos and the funky edge to Olivier’s keyboards and Jimmy Pallagrosi is a modern day version of Animal from The Muppets. The appreciative crowd soak it all and give some serious applause. The elfin-like Mary Reynaud makes her first appearance on the edgey and thoughtful Closer To Irreversible and you can feel the heartfelt pathos and fervent melancholy blues coming across, once again, these musicians really know how to put on a show and this is one that has been honed into a well oiled machine but also one that never loses that required passion you want from a great live performance. Feel the guitar literally weep and the keyboards bleed sincerity as the notes literally leap from the screen and leave you transfixed. The thespian feel continues with the wonderfully melodramatic prog-fest that is Artificial Paradises. With the tense and dramtic keyboard playing of Olivier being central to the opening, the camera focused on his intense expression, you are drawn into the scene completely. The scene opens up with Franck and Mary the focus of attention. This is one song where inhibitions are left at home, a wonderfully thrilling and vivid display of musical excellence and portrayal by the singers. Almost like a three act play, you are caught on every note and nuance when the camera closes in on each performer. Let’s change the intensity and ramp it up with the schizophrenic heavy rock of Mr Hyde & Dr. Jekyll, a real throwback to the excesses of the late 1970’s. A really energetic rock out that is as infectious as it is utterly enjoyable. You really want to be there in font of the stage headbanging and rocking away to the ferocious guitar work and Franck’s great frontman performance. Franck introduces Articifial Love as ‘something more psychedelic’ and he’s not wrong. The music, performance and light show is all a little tripped out and drags you willingly into the mood. Mary and Franck are quite transfixing front of stage as they deliver their psychotropic performance, I’ve said it once and i’ll say it again, it really is musical theatre and, to me, is how this music is at its best. At this point things get a bit more interesting with Mathieu and Olivier giving a really spaced out guitar and keyboard combo before Mary and Christophe ultimately blow your mind with a duel didgeridoo display that is as theatric as anything that has gone before and actually made the hairs stand up on the back of my neck, quite spooky and eerie actually. Next we have what can only be described as ‘Star Wars with swords’, the Achilles Sword Fight where Olivier and Christophe do (choreographed battle) to a soundtrack not too dissimilar from The Imperial March all bathed in an ominously ghostly red glow. This segues immediately into another leviathan prog track Achilles. An engrossing opening perfectly captured by the camera as Franck gets his twin necked bass out to play. The quality on this DVD is excellent, both in sound and picture, the close ups are sharply in focus and there is a smooth transition between shots, no jerking or jumping around. There’s a Genesis feel to the song both in the music and the vocal delivery and this is more a music performance than a theatrical one this time, just focus on the excellence of the performers and the blazing guitar solo from Mathieu Spaeter, music at its purest and played with skill and aplomb.

A Brief Tale Of Time brings a science fiction story to life and an allegorical tale of how life isn’t always greener on the other side (or in the future). A powerful central performance from Franck is the core to this track, proper progressive rock both in content and delivery. It’s a slow burner to begin with, wistful and dreamy with the lights down low and the shadowy musicians playing in the twilight, the skill and dexterity is the main focus here. Things get a bit more upbeat when Mary joins Franck at the front of the stage, a winsome musical journey which leaves a contemplative footnote as it wanders across your mind, the visuals enforcing this feeling. Some Wakeman-like keyboard ingenuity and finesse from Olivier ramps up the prog quotient even more and Franck’s edgy bass line joins the party as the stage is awash with a rainbow of light and you are treated to something that I’m sure even ELP would have been proud of. Add in the great little video (made entirely out of animated cartoon drawings by Olivier ‘Casoli’ Castan) and you couldn’t really ask for more. The last song (before encore) is The Last Oddity (from ‘Oddity’ funnily enough), another superb twelve minutes of progressive rock fused with Gallic flair. The musicians own the stage and Mary and Franck are the centre of attention with their earnest and fervent vocal performances. The camera wanders around the stage picking out the individual musicians in their reverie as this intricate and dreamlike song is played out before you. When the camera pans out to the audience you can see their rapt attention as they focus on every note and word. Christophe delivers a punky, truncated riff and the fuse is lit, get ready for the explosion! Off we go on a convoluted rock out, Mary’s waif like figure throwing herself around as things get altogether more funky and 70’s inspired, where’s my flares man??!! The atmosphere comes across as utterly electric as Franck decides to go for a wander off into the surprised audience, now where’s he gone? The trippy and psychedelic aura pervades all and leaves you wondering what illegal substance was slipped into your coffee as these musical artists deliver a completely demonstrative spectacle, the highlight being  the four-armed guitar playing performed by Christophe and Mathieu, you’ve got to see it to believe it, pure theatre! The band move straight into a spine-tingling four minute sequence from Genesis’ ‘Supper’s Ready’, nostalgia for the fans deep at its heart with Franck, as animated as ever, delivering a great homage to Peter Gabriel and Mathieu delivering a superbly emotive guitar piece. Franck goes round doing the obligatory band introduction to the audience and things come to a close, or do they?

Well there’s always got to be an encore hasn’t there? The camera sweeps around the incredibly appreciative, lively and passionate audience who have lapped up everything laid before them and then back to the stage. Franck is stood there with his Mad Hatter’s top hat on and we are going to be treated to The Franck Carducci Band’s way out version of Alice in Wonderland, Alice’s Eerie Dream. This is pure musical theatrics at their most extreme, almost like a circus sideshow from the 1930’s, titillating and thoroughly enjoyable and you can’t take your eyes of it. It’s an absolute blast from start to finish with its blues-rock roots and vivid visuals. Mary arrives as a very provocative Alice indeed and gives a real sensuous feeling to proceedings. Just let yourself go with the flow and enjoy this fourteen minutes of unabashed entertainment, guitar solos fly by, Jimmy is as ebullient as ever behind the drums and you just know that everybody is enjoying themselves to the utmost. As the song and performance come to a close you know they have left nothing behind and given everything of themselves during this thrilling, engrossing and captivating show.

This is how music should be consumed, the high energy performances of all the musicians are utterly addictive and leave you wanting more. There’s a primal force at play here and it comes across in every word and note as if the artists are giving something of themselves to the audience. Skillfully filmed with a superb light show and stunning sound, ‘Tearing The Tour Apart’ is a musical tour-de-force and should be on anybody’s wish list!

And just to spice things up, Franck has told me that there will definitely be a Blu-ray release of this wonderful gig.

Buy ‘Tearing The Tour Apart’ on DVD from The Merch Desk 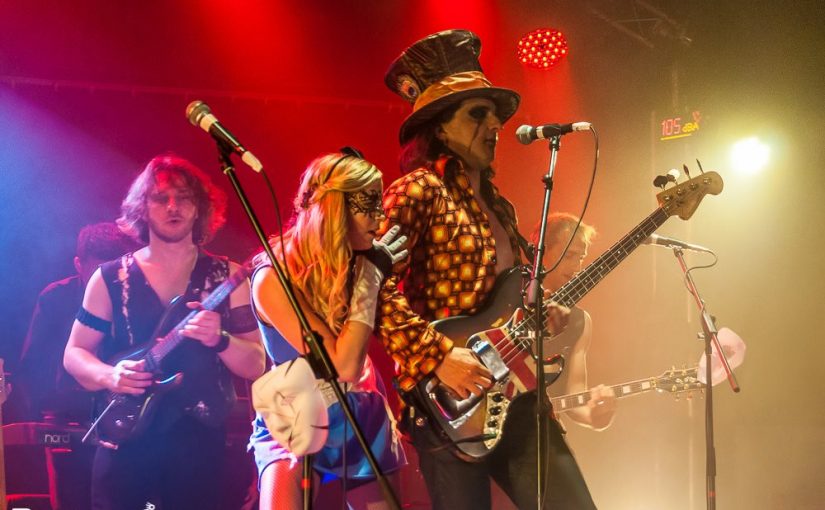 Seems like things have been very quiet lately with the Franck Carducci Band but Progradar has learned that they have been busy like bees, working on the production of a live DVD of the “Tearing The Tour Apart” tour.
The recording for this DVD was made during 2 concerts at Climax Club Legend at the end of 2015 and will feature special guest Jimmy Pallagrosi (Karnataka) behind the drums! There’s no news yet regarding any release date but, suffice to say, we will keep you updated!

The band have released a teaser for the forthcoming release:

I spoke to Franck himself about the making of the DVD and he told me this:

“It’s an absolute delight to be able to release a DVD of our live show. For me, the visual aspect have always been a full part of live music. That’s why acts like Genesis & Peter Gabriel, David Bowie, Alice Cooper and of course Pink-Floyd have always been huge influences of mine. So a DVD was completely necessary to be able to share the full experience of our show and I do hope people will enjoy it!”

Franck Carducci has started a Crowd Funding Campaign for the new DVD, sign up at the link below:

You can buy Franck’s superb last album ‘Torn Apart’ (as well as his debut ‘Oddity’) on CD from The Merch Desk here:

And on digital from bandcamp here:

And here is what some sage music industry stalwarts have had to say about ‘Torn Apart’ :