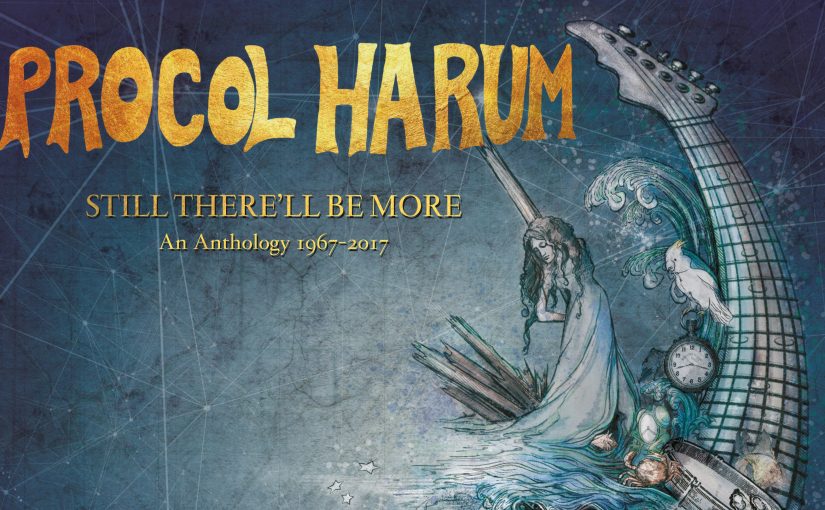 Celebrating their 50th anniversary in style, and still very much active as a highly entertaining and popular live band, Procol Harum’s catalogue is in the process of being remastered and reissued in definitive editions by those nice folks over at Esoteric. So far, they have released the band’s first four albums (‘Procol Harum’, ‘Shine on Brightly’, ‘A Salty Dog’ & ‘Home’), also released imminently are 1973’s ‘Grand Hotel’, 1974’s ‘Exotic Birds and Fruits’ and 1991’s ‘The Prodigal Stranger’.

Here to celebrate the band in all their musical glory and evolving sound is a mammoth 8-disc boxed set, or if the budget doesn’t quite stretch, a nicely packaged double disc ‘best of’.

Famous for that song A Whiter Shade of Pale, there was (and is) always much more than just that single, the ever present voice and keyboard work of Gary Brooker, for instance, probably one of the most recognisable voices in contemporary rock and someone whose voice just manages to get so much better with age like a fine wine Gary has fronted Harum on and off (the band had a ‘brief’ hiatus between 1977 and 1991) with a revolving line-up that has included such stellar musicians as Matthew Fisher, BJ Wilson, Mick Grabham, Robin Trower and Chris Copping. The band currently includes Matt Pegg (son of Fairport’s Dave on bass) and Geoff Whitehorn on guitar.

Procol Harum were riginally formed as the showcase for the song writing partnership of Gary Brooker (music) and Keith Reid (lyrics), although Reid never actually played with the band but, until 2012, provided the lyrics to every Procul original.

Across these 8 discs, the compilation goes far beyond the predictable, of course it opens with Whiter Shade, still hauntingly magnificent despite the familiarity. Disc one covers the first 4 albums, mixing the well known with album cuts and B-sides. Astonishingly these 4 albums covered a 4-year period and show how the song writing of Gary Brooker and Keith Reid matured, as did the guitar work of Robin Trower.

Discs 2 & 3 mop up the remaining studio albums, with cuts from ‘Broken Barricades’ like Simple Sister and many others, showing how the bands sound had evolved and matured. The extracts of “Live In Concert with the
Edmonton Symphony Orchestra”, in where the orchestra really adds so much to the music, makes the announcement of an October re-release of the full album a welcome one. Sometimes reunions can be unfulfilling and happen for the wrong reasons, however this was not in Procol Harum’s case, as tracks from the latest albums ‘The Prodigal Stranger’, ‘Wells on Fire’ and ‘Novum’ all highlight how the song-writing has matured and show that Gary Brooker still has one of the finest voices in rock.

That provides a superb introduction to the studio history of an much underrated band who made a big mark on the rock scene, audio discs 4 & 5 are two complete concerts, the first one is ‘Live at the Hollywood Bowl with the Los Angeles Philharmonic Orchestra & the Roger Wagner Chorale’. Recorded 21st September 1973, it showcases the line up of Brooker, Cartwright, Grabham, Wilson and Copping  along with the Los Angeles Symphony Orchestra, and treats us to an aural delight of classic Harum like Conquistador, TV Caesar, Grand Hotel and A Salty Dog, all performed by a band who at this point were at the peak of their powers which, along with the Orchestration and the Roger Wagner Chorale, makes this one of the reasons to invest in this box.

The concert on Disc 5 is ‘Live at Bournemouth Winter Gardens’ in 1976 with the same line-up, who had honed their skills and were performing with power and style, something which only comes from 5 musicians working in total harmony. BJ Wilson shows the powerhouse drummer he was while Brooker is a perfect frontman. They rattle through a set that includes old favourites (Whiter Shade, A Salty Dog, Beyond the Pale), newer material and covers like I Can’t Help Myself (Sugar Pie, Honey Bunch), all performed with the intricacy of a band at full pelt.

With three more discs covering live performances, including 3 complete concerts (2 from Germany and one from the BBC’s Sight and Sound), the evolution of the bands live performances is a delight to see and it’s nice to see the set lists being mixed up.

If you’re a massive fan, or someone who wants to know more about Procol Harum, this boxed set is an excellent anthology of one of the more interesting bands who appeared during the prog period, and whose blend of rock and classical sensibilities made for many interesting albums.