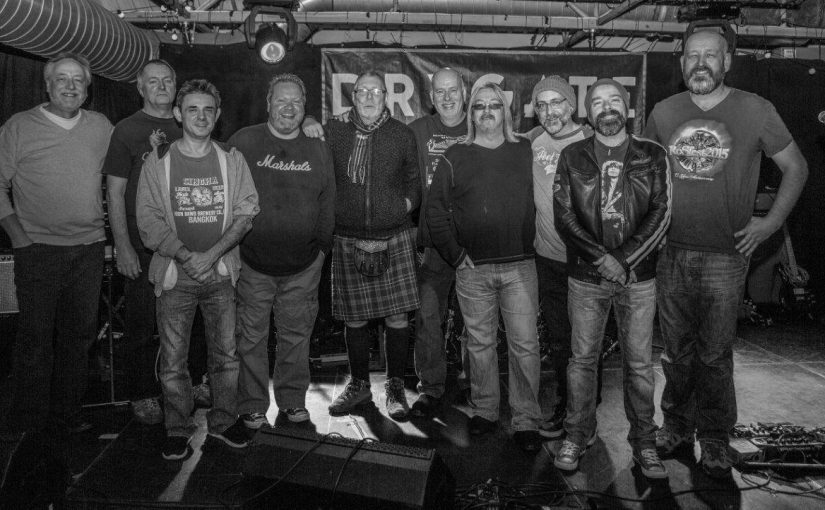 We have spoken a lot recently about great albums from the last decade and I announced that Progradar’s choice was Big Big Train’s English Electric – Full Power but there was also an album that was a very, very close runner up and I still love it to this day.

I have a very close emotional connection to the album through the band and they have become great friends of mine. So here is my review of Able Ganz’s incredible self-titled release from 2014, kindly reproduced with the permission of Lady Obscure Music Magazine where it was first published.

When I first started to formulate this review my intention was to base it around the announcement of the so called ‘new’ Pink Floyd album and how we should really be encouraging new music and not collections of old material left metaphorically laying around on the studio floor, given a new coat of looking at and then released to the expectant public, no matter how honourable the intentions.

Instead I am going to concentrate on the music on this new album and how it has totally enraptured me and reinvigorated my sometimes jaded view of the music industry in these modern times. I have often talked about how music has made my more complete, how it has helped me through difficult situations and, sometimes, how it can just be so damn good and life affirming.

You should all know by know how I view mainstream chart music with more than a modicum of displeasure. Corporate crap to appease the masses and increase the bank balances of the music executives with no creativity or soul in any way, shape or form. Then, occasionally unexpectedly, an absolute gem of an album that contains the artist’s heart and soul will come along, one that will have taken a long time to come to fruition.

Music like this is what gets me out of bed in a morning, music that I have to wax lyrical about and spread the word to as many people as possible. To this reviewer, the music industry, at the sharp end, has lost its soul and its understanding that it is there for people to enjoy and to make these people’s lives a better place to be. Now it is just a vast, money making machine, bloated and pointless. It is these smaller, independent artists and labels that hold the true meaning and the future of the music industry.

I have been aware of the Scottish band Abel Ganz for quite a while and heard the odd track that has quite impressed me. However, it is this latest release, self-titled, that has really caught my attention.

First, a quick catch up.

After a very lengthy hiatus Abel Ganz re-emerged in 2006 with the release ‘Back from the Zone’ – a compilation of 1980s material plus two, new recordings. Original members Hew Montgomery and Hugh Carter were joined on this release by long-time collaborator and drummer Denis Smith.

A brand new album ‘Shooting Albatross’quickly followed in 2008 on the band’s own, newly created record label and was very well received internationally. New, full time members Davie Mitchell (lead guitar), Mick Macfarlane (lead vocals, guitar), and Stevie Donnelly (bass) came on board to complete this album and flesh out the band’s reinvigorated line up with Denis Smith taking on major recording and production duties for the band as well as filling the drum stool.

After two years of gigging and promoting ‘Shooting Albatross’the band began making preparations to record their next album. Shortly after work began, Hew Montgomery made the decision that the time had come for him to pursue solo interests and so bowed out. He was replaced by virtuoso Jack Webb (keyboards) who had contributed to ‘Shooting Albatross’as a session musician. Nine months later as recording had only just begun in earnest Hugh Carter also retired from the band for geographical reasons.

With work on new album freshly started the decision was made to carry on write and record new album with the blessing and encouragement of Montgomery and Carter. With all parts of the album virtually completed and mixing sessions begun the role of keyboards player changed hands once again with new full time member Stephen Lightbody joining the band.

Entitled simply ‘Abel Ganz’ the new album makes a deliberate effort to take in new influences and mix them with the old. A genuine attempt has been made to try new things and explore potential new directions. In short – to try and ‘progress’.

Many guest musicians appear on the new album but the band are particularly proud and excited to have worked with the legendary Jerry Donahue and Malcolm Jones [of Scottish folk-rock band Runrig] on the track ‘Thank you’.

Delusions of Grandeur is a delightful introductory piece to the album with oboe, violins and violas accompanying the piano to almost freshen your musical palate ready for the main event. What follows next, the five-part Obsolescence is as good a piece of music as I’ve heard all year. Starting with Part i Sunrise, which is truly captivating, it has an ethereal mix of acoustic guitar, piano, recorder and effortlessly harmonised vocals, almost religious in its delivery. It gently segues into Pt ii Evening which increases the tempo but retains the innocent wonderment of what has gone before. There is a gentle folk edge to the song and it just fills me with an effortless flow of good feeling, truly enchanting, the steel guitar being a touch of genius. A feeling of urgency pervades all as Pt iii Close Your Eyes begins. This part of the piece has more of a mainstream progressive style to it, bass heavy with clever drumbeats. The delectable swathes and swirling drops of Hammond organ are an added nod to the seventies prog stalwarts. What is becoming increasingly clear is the quality of Macfarlane’s vocals. He truly has an impressive voice. The different time changes and signatures lead you on a musical journey that entertains at every turn. A flute that flitters around like a dancing bird is the entrancing introduction to Pt iv The Dream. It has a slow and measured rhythm that entices you into its musical web and holds you transfixed. You are treated to an aural cornucopia of flutes, guitars, tubular bells, double bass and church organ that builds up to an almighty conclusion to this amazing musical delight, Pt v Dawn. This instrumental finale has a depth of feeling that strikes into your psychological core to an emotional extent. The soaring guitar bleeds empathy as it reaches heights of feeling and fervour, a solo full of passion and ecstasy.

Take a moment to get your breath back after that musical extravaganza and then let the graceful and divine calm of Spring wash over you in a cathartic fashion. On this track Macfarlane shows his prowess with the acoustic guitar. The low hum of crickets calling is accompanied by a mellow acoustic guitar and a great brass section on Recuerdos. A soft vocal full of emotion adds a serious note to this amiable song. It is as you get this far into the album you realise the number of differing musical styles that the band can intertwine with aplomb. It doesn’t detract from any enjoyment of the album. In fact it just adds another layer of delight to it. Heartland begins with the muted sound of children playing before a very oriental sounding note emanates from the keyboard. Vocals on this song are provided by Joy Dunlop and the band takes another ninety degree musical turn as keyboards and programmed percussion deliver a sound not unlike an ambient dance track. It is tranquil, calming and subdued despite coming straight out of left field. There is a smidgeon of Celtic folk song to it but you are never quite able to grasp it fully as it lies just out of earshot. It is different and intriguing, yet very good.

End of Rain is another instrumental track that is like a tropical storm envisioned musically. It is full of highs and lows, powerful yet, sometimes, a calming influence. It is due to the bands undeniable skill that it stops short of just being an ambient background track yet, for this listener at least, it is the weakest track on the album. Maybe an experiment with a different musical direction that wasn’t entirely required. Just to prove they really do know how to mix several unlikely musical styles and make them work Abel Ganz deliver Country with aplomb on Thank You. I think this is a brilliant song and I don’t even like Country! It delivers its heart warming message in several different languages yet never loses focus or direction. The vocals are full of feeling and affection and the accordion and steel guitar add a layer of gloss to the whole track. It is captivating, full of charm and leaves a feeling of wellbeing and content wherever it goes.  Mick Macfarlane takes the lead with the acoustic guitar once more on the instrumental A Portion of Noodles. Another dip into the well of folk influenced music, it dances across your aural receptors with a featherlight footprint. Ghostlike and almost intangible, it is beguiling and mesmerising.

Fourteen minutes of musical delectation now follows in the form of Unconditional. Initially sounding as if it comes from the American heartland and the pen of Springsteen or the combined talents of The Eagles, it delves deeper into our collective musical knowledge to deliver on all counts. You don’t have to wait too long before some free form jazz is let off the leash. Muted trumpet played with alacrity and a lilting piano note take the lead and you soon feel you are in a smoky jazz lounge in New Orleans drinking bourbon and feeling at one with the music. The slightly discordant note of the keyboards that follows takes you down a more experimental route whilst keeping that jazz/fusion edge. The whole song encourages you to sit down and unwind, let the sounds wash over you and take you away from the stress of everyday life. Throw in some flashes of scorching guitar that Joe Satriani would be proud of and things are just about perfect. Hints of blues, jazz and progressive rock infuse to create something quite exceptional on this song, it is another musical delight that deserves wider recognition. The song comes around full circle to smoothly meet up again with the classy feel of the introduction and you know you’ve just heard something special. To close out the album you are treated to The Drowning. A luscious brass arrangement lends added gravitas to Macfarlane’s husky and soulful vocal. It has a wistful, if not downright melancholic feel to it but is extremely charming in its own way. The flugelhorn solo is a thing of dignity and style and adds to the aura of longing and loss.

I have just listened to a musical composition that goes further than just pleasing the senses. It is full of beauty and grace and manages to combine musical styles that are quite disparate and deliver a musical release that beguiles, bewitches and enthrals. This is music that will stand the test of time and could become a legacy for this superb band. Abel Ganz has delivered what is bound to become a highlight of this already impressive musical year, I implore you to go henceforth and purchase this musical marvel!