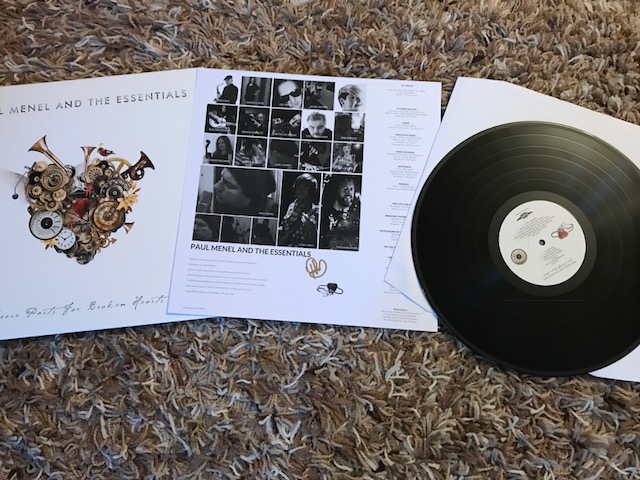 It was 1986 when the CD revolution was gaining pace and I bought my first music system with a CD player, a Panasonic system with the works, twin tape decks, graphic equalizer, record deck, you name it. I bought it from Quay Televison in Bridlington which, over thirty years later, is still standing, unlike my vinyl collection!

The first CD I bought was Billy Idol – ‘Whiplash Smile’ and from that day on,the writing was on the wall for all my cherished LPs which I’d collected over the last 7 or 8 years. My first record player was a hand-me-down from my parents. One of those old Sanyo music systems that looked like someone’s sideboard but played the music really well to my young ears.

Well, thanks to Billy, my CD collection expanded and I ended up selling all my vinyls to Smugglers Records for what now seems a pittance.

Fast forward 30 years and a certain Chris Topham of Plane Groovy (also a Virgin Airlines pilot I’ll have you know) messages me and ask me if I’d like to start reviewing vinyl. I have to admit I was a bit of a naysayer when it came to the new vinyl revolution and wasn’t 100% certain but I agreed to give it a go. The album in question was the 3rd release from ex IQ vocalist Paul Menel and true to his word, Chris sent ‘Spare Parts For Broken Hearts’ over post-haste, arriving just before my new record deck!

Here is the PR stuff about this new album:

“This album, the first from Paul Menel and his new band, The Essentials, represents a further step in Paul’s musical evolution from his early days with 1980s UK proggers, IQ. It demonstrates well his growth as an artist and as a man, not frightened to face his demons and to confront the emotional challenges of life in the early years of the 21st century.

Ably supported by his band, The Essentials, featuring the powerhouse rhythm unit that is Tim Churchman on drums and Steven Swift on bass, this album has again been produced by the legendary Gavin Monaghan – renowned for his work with Robert Plant and Peter Gabriel among others.

Appropriately to be launched on Valentines Day 2017, the album takes us on an emotional journey into maturity, with catchy songs set to become earworms and which talk of love lost and found and the trials of life.

It’s a toolkit for those looking to mend a broken heart & go on the next phase of their life journey with Paul and his band at their side as part guru, part fellow traveller, part court jester reminding us not to take life too seriously…

Available initially on vinyl and download only through Vinyl Specialist, Plane Groovy“. The first thing that strikes me is the quality of the packaging, the artwork by Graeme Bell is visually stunning on the cover and the vinyl centres themselves and it comes with a stylish lyric and credit sheet, it definitely feels a quality product to me.

Now, the music. Before I talk about the songs themselves, please remember this is the first vinyl I have played in a very long time. My ears have become used to a diet of clinical mp3s and compact discs so the first thing that struck me is the warmth and quality of the music as the needle tracks the grooves. It almost feels alive and what others would see as possible imperfections, I see as being an essential component of the sound.

There is a permanency to vinyl that you don’t get from anything else and I dismissed this with a nonchalant shrug of the shoulders for such along time. I was absorbed in the packaging, artwork and lyric sheet for along time and the simple act of lifting the needle to put it on the LP for the first time is joyous in its own way. The first notes of ‘Til Dawn Rolls In’ immediately grab my attention, an upbeat and absorbing track with some excellent sax work from Sam Rogers and great backing vocals from Emma Skipp and Kaytee De Wolfe. It has a cultured pop song feel to it but one that is much more intricate and intelligent than the usual fare we are given and would not have been out of place in the 80’s alongside Duran Duran, Simple Minds and the like. Like the bastard son of the Stray Cats and Chris Isaak, there is a warped rockabilly feel to the gloriously dark Strife with its dirty guitar riff and Paul’s edgy, knowing vocal delivery. It’s a song with a real raw immediacy to it, pared back and dangerous and I really like it, on vinyl the sound almost leaps out from the speaker to assault you.

With a graceful piano and a vocal that Paul Carrack would be proud of, Walk In My Shoes is one of many highlights on the album. A real 90’s songwriter’s classic track. Haunting keyboards and backing vocals add lustre and polish to this brilliantly classy song. I’m sat at the keyboard swaying in time as I write these words, it walks the right side of cheesy but I am seeing big hair and even bigger shoulder pads and an audition for that classic 1990’s Volkswagen advert theme. The edginess returns with Crash And Burn, a song that has  a real 60’s tone to it, even a Bond theme feel with its big band strings and echoing drumbeat. You’ll love the guitar sound too and Paul’s vocal is mesmerising and dominant,especially on the catchy chorus. This is elegant pop music for adults with a mature overtone and an over 18’s certificate, imagine a dark nightclub in London’s soho and a singer in a sharp black suit, his trident voice cutting through the smoky atmosphere and you won’t be far wrong. Compare notes by playing the mp3 and then the vinyl straight after and you can literally feel the extra dimension that the latter gives to the song.

Humour is brought to the table by the Man of Steel and Kryptonite, a lighter 60’s sounding song with a levity at its core. The dancing flute of Mat Taylor gives it a playfulness and Ben Drummond’s rhumba guitar adds a sassy overtone. Paul’s powerful vocal is aided and abetted by the wonderful backing of Ange Lloyd and the song bounds along with glee right until the close. There’s a cinematic expansiveness to the jazzy Pedestal, a stylish song that really showcases the songwriting ability of Paul Menel. There is a standout performance by violinist Julianne Bourne and the whole song just feels like it should be the soundtrack to some stylish and clever movie that has to include a drive in a classic Ferrari on the Amalfi Coast, such is its passion and verve.

Bloody hell, what’s happened? The music has stopped…. Oh, yes,it’s the end of side one, hang on while I go and change it over! Side two, now there’s something I never envisioned saying two months ago, opens with They Call Her Leaf, a song that will illicit comparisons to a certain tall Scottish singer  and this is not surprising seeing that Paul was the lead singer of IQ in the 1980’s when the neo-prog movement first started and Marillion were contemporaries. It’s a powerful, anthemic track with fantastic backing vocals from Vix Vox and a chorus that soon becomes a definite earworm. There’s bombast and not a little bit of grandiosity and Paul gives a definitive vocal performance. You know those tracks that kept turning up on E.L.O albums? The ones where Jeff Lynne was channeling his inner 50’s rock n’ roll star persona? Yes? well Paul gives us his own version with the superb title track Spare Parts For Broken Hearts. It’s a rocking tune that just takes the lead and never lets up, there’s accordion and violin joining in with his demonstrative vocal that shows us the broad palette that this splendid musician has.

Blues and jazz combine on the rollicking The Pleasures Of Vicarious Vengeance. A guitar sound that George Thorogood would be jealous of and Sam Roger’s uber cool sax are the ultimate driving force on this energetic, funky song and you just have to let your hair down and join the fun. Atmospheric and moody, Hey, Did You Hear About Paul takes a more serious tone with Paul’s vocal becoming more serious and thoughtful. Jake Henry gives gravity to proceedings with his smooth keyboard playing and an 80’s neo-prog nunace from Tim Churchman adds flavour to everything.

A tongue in cheek 80’s Let’s Dance period David Bowie influence is what I get from I Told My Last Lie Today, the driving piano beat, accordion and funk infused guitar just make you want to dance and there’s some great vocal flirting between Paul and Vix Vox. Paul Menel shows he can wear different musical faces with ease and skill. A really upbeat song that is fun of fun and wants you to get down and join in with the party. The final song on what has been a really riveting and enthralling musical journey is the wistful Happy Face, a track that could have come straight from a West End musical with its theatrical feel. Jake Henry’s keyboards and piano give it a simple grace and Paul’s voice with it’s emotional edge is really touching. Duel saxophones from Sam Rogers and Andy Sax add the requisite jazz notes and Bryan Corbett brings his trumpet to this amazing listening experience, the silence that descends as you hear the crackling of the needle end is actually quite deafening. So, I really have to come to two conclusions here and I’ll talk about the actual songs and album first. Paul Menel and The Essentials have produced a musical experience that is brilliant and enjoyable from the first note to the last.There’s humour, pathos and emotion in spades and it’s a varied and immersive listening journey. It’s an album that I will be listening to a lot that’s for sure.

Now Paul and Chris Topham have a lot to answer when it comes to vinyl. Is it a better listening experience than CD or mp3? To my ears there is a warmth and connectivity to vinyl that you just do not get with the other formats. My enjoyment of this album was definitely enhanced by the vinyl experience, the packaging and the listening. And, curse you Mr Topham, I now have twenty further vinyls to backup that verdict!!